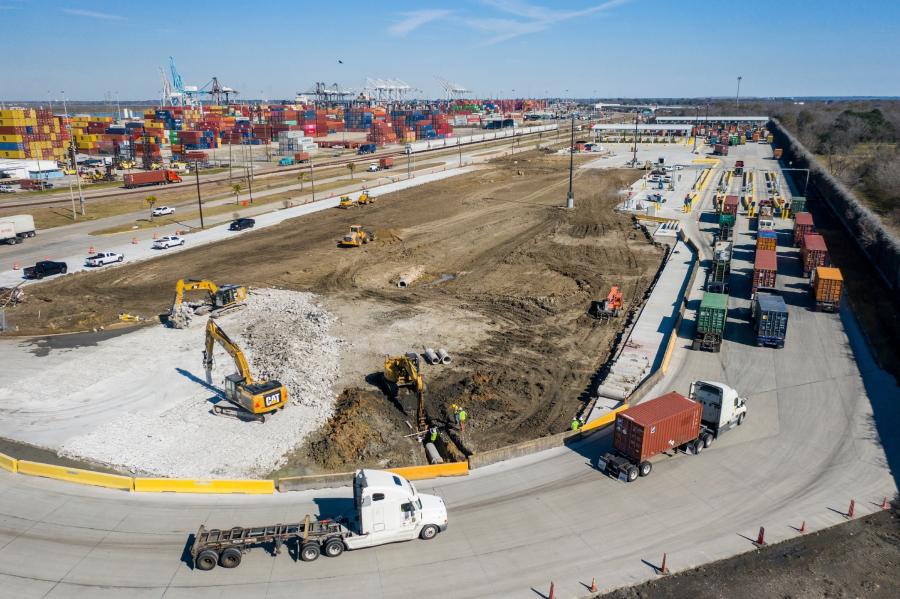 Supply chain issues have been in the news these last two years like never before. Pictures of giant container ships getting stuck in the Panama Canal, the Suez Canal, the Chesapeake Bay and elsewhere have appeared in the media. Ships have been lined up in the ocean like cars mired in rush hour traffic.

Large container ships and the ports that serve them were once an almost invisible part of the magic that brought products from factories to the stores to the consumers.

No longer. What is happening at the ports has become visible and more important than ever.

Port Houston, the nation's largest port for waterboard tonnage, receives some of these gargantuan ships and processes some three million containers each year, ranking sixth in the nation overall for total container TEUs.

Port Houston owns eight public terminals along the 52-mi.-long Houston ship channel. This includes the two terminals at Bayport and Barbours Cut. A visitor to these terminals would inevitably come away saying it's either "big" or "enormous."

The PHA Wharf 6 project is at Bayport Container Terminal in Seabrook, Texas. The project is partially funded by the U.S. Department of Transportation Maritime Administration in the amount of $21.8 million. Construction at Wharf 6 began in May 2021 and will last slightly more than two years. It includes building a new 1,000-ft.-long wharf. This new construction will allow for the cranes to unload shipping containers from neo-Panamax vessels. 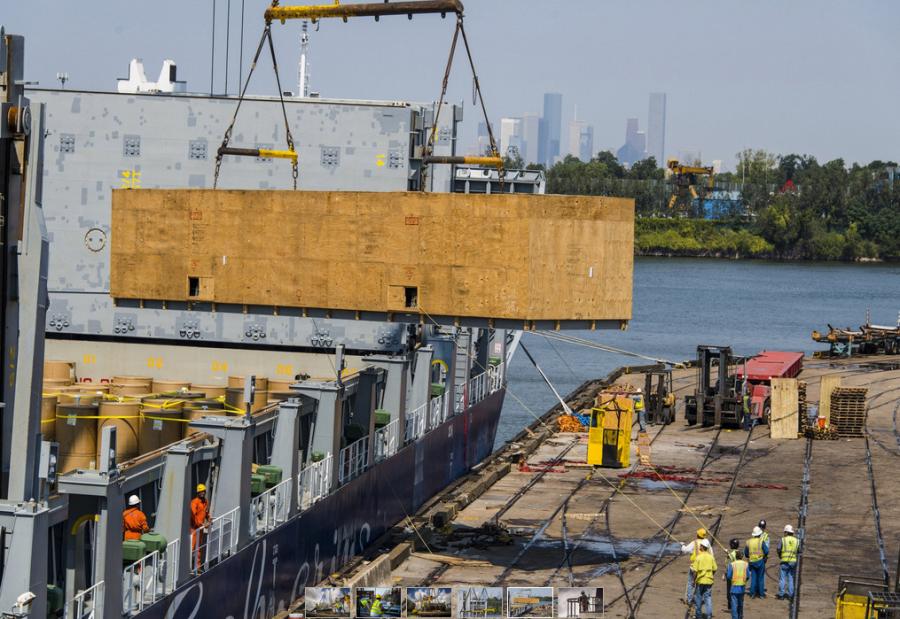 "The Houston Port region has an impressive impact on the state, touching 10 percent of the state's economy and 4 percent of the entire U.S. economy," said Adeel Malik, McCarthy's vice president.

"Some vessels have been redirected from the West Coast because of bottlenecks there, but most of the shipping comes through the Panama Canal. As the ships coming through the canal have been getting larger, the Port Houston has mirrored that by increasing in size to handle the larger vessels. The majority of the goods are coming from Asia."

A key part of the project is the dredging operation to make the channel deep and wide enough to handle the massive ships.

"Crosby Dredging is one of our partners on the project," said Malik. "They are dredging the channel to 49 feet in depth at Bayport."

At the Wharf 6 project, Crosby completed 400,000 cu. yds. of dredging utilizing a 2400 Lima bucket dredge mounted on a 40-ft. by 140-ft. spud barge. A 1,200 hp tugboat was utilized to push the dredge spoil material barges for disposal onsite.

This excess material was transported to land owned by the Port where it was dried out and recompacted and stabilized with two Cat 336 excavators, three Cat D6 dozers, three 84-in. pad foot rollers, one 480 hp lime mixer, disk and a Cat grader to be used for a future lease site. The Port currently is a 375-acre hub of activity with plans to expand to 550 acres.

Given Houston's prominence in oil and natural gas, it is no surprise that this port is ranked first in the nation for these resources.

The project entails drilling shafts of 42 in. in diameter and up to 157-ft. deep to support the wharf structure. These shafts were drilled by McCarthy's subcontractor A.H. Beck.

The tangent wall is supported by 36-in. diameter shafts up to 90-ft. deep. McCarthy's subcontractor, Weber-Balke, installed these shafts.

All in all, 623 drilled shafts will be installed on the project utilizing four separate drill rigs.

One of the biggest challenges for McCarthy's work at the Port is contending with the Port's hum of activities. Semi-trucks buzz into and out of the facility in under an hour to unload or pick up new containers. The massive ships, which weigh up to 120,000 tons when loaded, are a beehive of activity. The gigantic cranes on the shore pluck the 20-ft. long or 40-ft. long containers off the ships effortlessly and load them onto the waiting trucks. It is not unusual for the ships to be unloaded within 30 hours.

The construction team at McCarthy had to successfully navigate the on-the-ground port activity to get to the construction site, and avoid the various booms loading, unloading and servicing the ships.

"It is a challenge to schedule the work safely around so much activity," said Malik.

To support the immense loads at the wharves, the construction team had to ensure the new construction was on solid footing.

"We began by driving casings 15-to-30-feet below the existing mudline in the water, then drilled through the casings to insert the shafts as deep as 150 feet," Malik said. "Once we had drilled it out, we poured in a slurry so the walls of the drilling would not cave in. Finally, we dropped a rebar cage into the shaft, pumping out the slurry and pumping in concrete."

For each drilling operation, McCarthy needed four barges and two cranes. The drill rig uses one barge, with a second barge installing the casings and a third handling the excavated material. A fourth barge carries the rebar cage.

In addition, workers had to manipulate booms for drilling and for pouring concrete that could be as long as 250 ft.

"At times, there were as many as 10 booms in action at the same time, including concrete pump trucks," said Malik. "Our workers have to communicate constantly with other operations to make sure that these booms do not interfere with each other or any ship activity."

Workers needed a 220-ton crane barge to facilitate the land construction. Once again space was limited, so staging equipment on the water was the only practical solution. Workers then labored to build a concrete deck on top of the foundation to support the mammoth cranes that will be used to load and unload the ships.

Work at Barbours Cut started in June 2021 and was completed by early April 2022, approximately two months ahead of schedule.

"We have been working at ports along the Gulf Coast for some 30 years now, so we are familiar with marine construction conditions," said Malik. "However, this year has been especially challenging with supply issues, trucking limits, plus shortages of cement and fly ash."

In the long run, McCarthy's work at Port Houston will help alleviate some supply chain issues. Texas and the rest of the country are hoping for "back to normal" and projects like this one at Port Houston can help make it a reality. CEG