The mobile machine’s tracks enable it to move easily on site, which is useful in other applications besides quarries, such work for highway contractors. 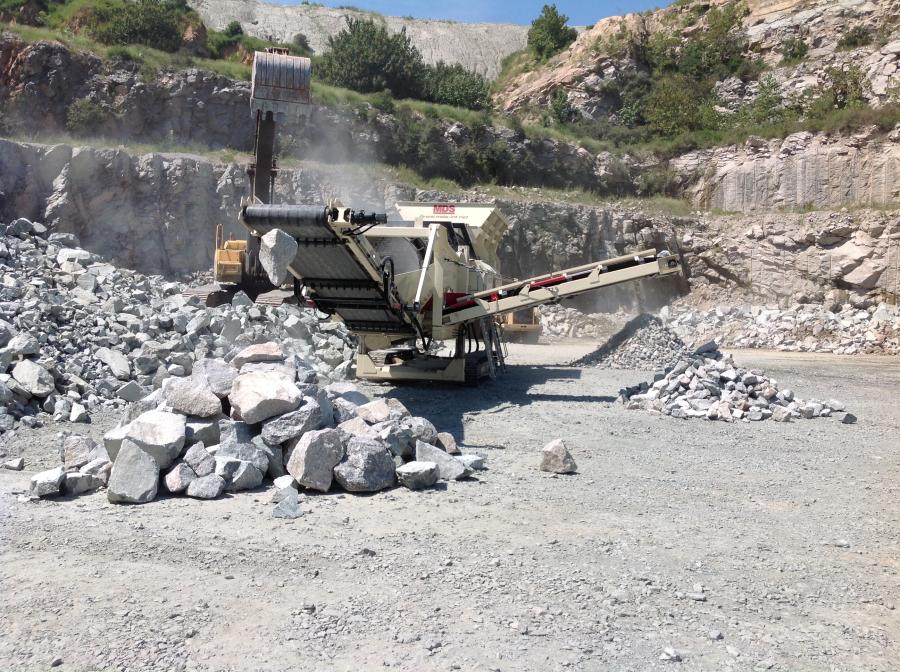 The MDS M515 track trommel is a multi-purpose machine, capable of processing 300 to 500 tons (272.2 to 453.6 t) of material per hour, while cleaning, screening and separating rock to produce rip rap products.

MDS International, the Ireland-based manufacturer of the MDS rock trommel range and a contract fabrication provider, has recently made great strides with its introduction to the American market.

Liam Murray, owner of MDS International, initially approached European Powerscreen dealers about offering his machines to the market and has experienced success with his company's MDS M515 track trommel in Europe and Australia's quarry industry. Word of the machine's capabilities spread throughout Powerscreen's dealer network until it reached Powerscreen Mid-Atlantic Inc. in North Carolina. Andrew Coney, president and owner of Powerscreen Mid-Atlantic Inc., agreed to take the first United States-bound machine and introduce it to the United States market.

The MDS product line is the responsibility of Mark Keenan, sales manager of Powerscreen Mid-Atlantic.

“There is a hole in the market for this type of machine, and based on the initial reaction we have received from several customers that have seen the machine, I think MDS is going to be extremely successful,” he said.

The MDS M515 track trommel is a multi-purpose machine, capable of processing 300 to 500 tons (272.2 to 453.6 t) of material per hour, while cleaning, screening and separating rock to produce rip rap products. These products can be used in a number of applications, including shoring coastlines against erosion. Contractors can load up to 30 tons (27.2 t) of raw material and rock up to 32 in. (81 cm) into the hopper while the hydraulic push feeder moves the rock to be cleaned, screened and separated through the rock drum. The screens within the machine are removable offering contractors the flexibility to change configurations and to produce a variety of rip rap products — the first size product, up to 8 in. (20.3 cm); the second size product, up to 12 in. (30.5 cm); and the maximum oversize can be can be more than 32 in. (75 cm).

Another key feature of the MDS range is that they provide static or mobile units to meet a contractor's needs. The static units are capable of processing 1,000 tons (907.2 t) per hour. The mobile machine's tracks enable it to move easily on site, which is useful in other applications besides quarries, such work for highway contractors. The machine's ability to process concrete and rebar also make it ideal for highway contractors.

“You can take it to a contractor that picks up a job and maybe he does 15,000 tons of overburden with soil and rock mixed in. The machine is ideal for him. He could take it to that particular job and clean up the rock and then move it on to the next job,” said Murray.

Overall, Keenan said that customers have been very excited about the MDS M515 since MDS International and Powerscreen Mid-Atlantic established a dealer agreement this past April. The network includes coverage in Maryland, Virginia, West Virginia, North Carolina, South Carolina, Georgia and eastern Tennessee.

Murray also is pleased with his decision to use Powerscreen Mid-Atlantic as the dealer that will offer the MDS M515 track trommel in the United States.

“They are one of the top aggregate equipment dealers in the United States,” said Murray. “They are a strong presence in several Mid-Atlantic states. We wanted to pair with them because of their track record, customer base and the amount of expertise they have in this area.”