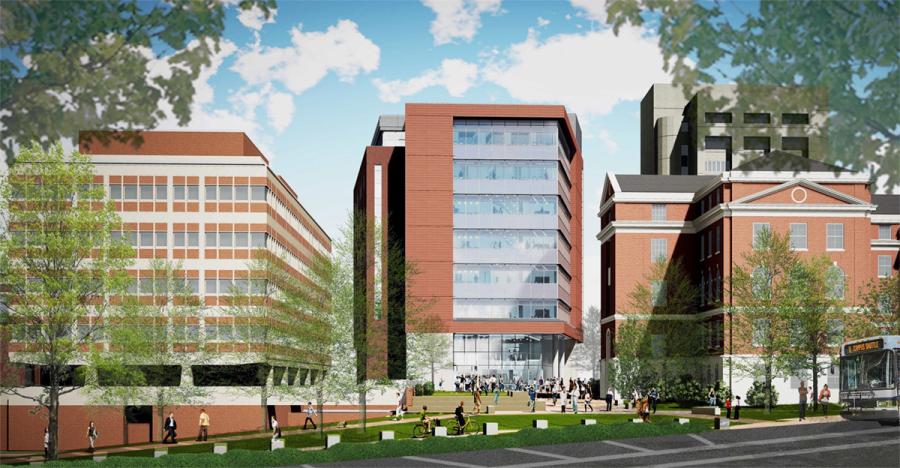 Designer rendering of the Medical Education Building as seen from South Columbia Street.

The University of North Carolina (UNC) campus in Chapel Hill may have looked a bit different to students and faculty upon their arrival in August for the fall semester, especially if they had not been on the grounds in more than a year due to the coronavirus.

That is because new construction is under way, while other buildings were completed over the last year, according to The Well, Carolina's online news source for faculty and staff.

Several large cranes mark some of the most noticeable changes — construction on the new surgical tower at UNC Hospitals, a medical education building and a larger media center. Despite the fact these projects began before the pandemic, significant progress has been made in the past 15 months.

The new UNC Medical Center Surgical Tower on Manning Drive will house modernized surgical spaces, enhanced pre-op and post-op rooms for patients, and comfortable waiting rooms. The new tower, set to be completed in 2023, will accommodate new equipment and procedures being developed by providers at UNC Medical Center and from around the world.

In addition, the UNC School of Medicine's new medical education building is under construction in the same spot as the old Berryhill Hall. The eight-story building will allow the university to expand its class size and facilitate interactive case-based learning. Among other features, it will include a 400-seat active learning theater. Slated to be finished late next year, the building is partially funded by the Connect NC bond approved by Tarheel State residents in 2016.

Construction also is under way between the north and south Student and Academic Services Buildings for the National Pan-Hellenic Council (NPHC) Legacy Plaza, designed to honor nine historically African American fraternities and sororities and their members. These organizations have made an impact on the campus with their commitment to civic engagement, leadership, academic achievement and community, according to The Well.

In the northern part of campus next to Phillips and Carroll Halls, the old Phillips Annex has been demolished and construction on the Curtis Media Center is under way. Part of the Hussman School of Journalism and Media, the 13,000-sq.-ft. media center will house flexible learning spaces, production studios and technical support spaces.

The Well noted that the surgical tower will have a substantial impact on the UNC Medical Center campus, including changes to traffic flows, both inside and outside of the hospital, and new protocols to limit the inconvenience for its patients and guests.

When completed in 2023, with the first patients set to arrive in 2024, the surgical tower will be the largest single building on the UNC Medical Center campus in Chapel Hill. Its operating rooms will range in size from 650 to 1,000 sq.-ft. – almost double that of the facility's current spaces.

The Well reported that other than on a few weekends, when construction crews will need to work on the pedestrian bridges that span Manning Drive, the road fronting the hospital should be largely unaffected by the construction.

Crews began working in January 2020 on the Medical Education Building for the UNC School of Medicine, a project that is expected to be done in November 2022, according to The Well.

The eight-story building will be a modern facility that will allow for expanded class sizes and co-locate UNC School of Medicine and UNC Health Care leadership administration.

The Well noted that the building will be constructed to include high-efficiency heating, cooling, and lighting systems and will employ low-flow fixtures and stormwater and condensate harvesting. These features will enable the building to use 30 percent less energy and 40 percent less water than the baseline for this type of building.

Part of the project has included the demolition of Berryhill Hall and the closure of the area between Carrington Hall, Bondurant Hall, and the Brinkhous-Bullitt Building – now part of the construction zone.

UNC's National Pan-Hellenic Council (NPHC) Legacy Plaza will pay homage to the nine UNC NPHC member organizations and their members. According to UNC's Student Affairs Development office, NPHC organizations have made a tremendous impact on the Carolina campus since 1973 with their commitment to civic engagement, leadership, academic achievement, and community.

"As an undergraduate, we dreamed of this type of an installation on campus honoring NPHC member organizations like those found on many other campuses," said Barry Brinkley, UNC Class of 2001, and a member of the Mu Zeta Chapter of the Alpha Phi Alpha Fraternity. "When the opportunity presented itself, I did not hesitate to be a part of it."

The NPHC Legacy Plaza will encompass approximately 750 sq. ft. with standing room for 125 people. It will be made up of 10-ft.-tall monuments representative of each organization and will feature a crest of each fraternity or sorority, as well as their national and university charter date and motto. The individual columns will be placed in order of the organizations' founding at the university.

In addition, bricks will be placed around the outer circle of the structure and 12.8- by 8-in. pavers will be arranged on the inside circle of the plaza. In total, room will be set aside for 540 bricks and 544 pavers at the site. Each one can be purchased by alumni to cement their legacy in the plaza.

"We are very excited to have this plaza not only come to fruition, but as with many things at UNC, be a flagship for other colleges and universities and their NPHC recognition pieces," said Zack Hawkins, director of UNC Student Affairs Development. "This project was hugely donor supported, and we are so thankful for the support. This is a living project, as new members are initiated annually and have the opportunity to be included in the garden."

UNC at Chapel Hill, North Carolina's flagship research university, first admitted students in 1795, making it one of the oldest public colleges in the United States. In 2020, Carolina's enrollment was just over 30,000 students. 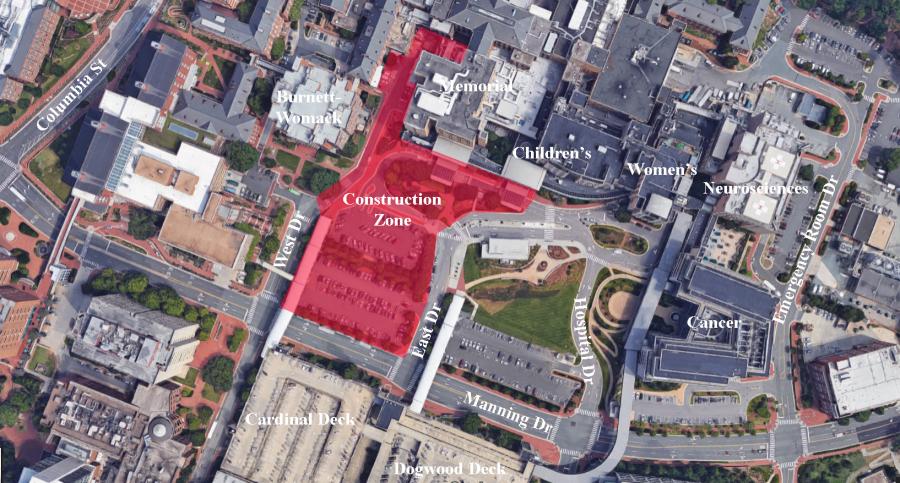