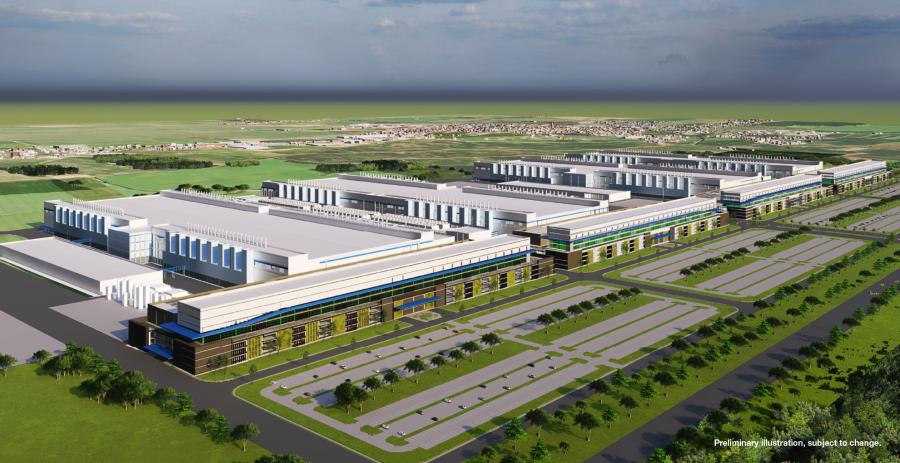 The semiconductor chip factory is slated to be constructed in Clay’s White Pine Commerce Park. (Rendering courtesy of Micron)

The computer memory chip specialist Micron has launched a plan to create an enormous manufacturing complex in the town of Clay, N.Y., north of Syracuse, by investing $31 billion to build four 600,000-sq.-ft. "clean rooms," on the site, Spectrum News 1 in Syracuse reported.

New York Gov. Kathy Hochul noted that the Onondaga County facility, roughly 40 football fields in size, will make it one of the largest construction projects in North America. In addition, the project is expected to create 5,600 related construction jobs, according to a news release from her office.

The semiconductor chip factory is slated to be constructed in Clay's White Pine Commerce Park. With it comes the potential for bringing tens of thousands of jobs to the region, U.S. Sen. Chuck Schumer said during a news conference unveiling the project in October.

In all, Micron will invest $100 billion over 20 years, which, according to Schumer, is the largest private investment in New York state history, and is set to provide 50,000 jobs throughout the area, with 9,000 working directly for the company. The average starting salary for a Micron employee is $109,000, he added.

He credited President Joe Biden, as well as the federal CHIPS and Science Act authored by Schumer, for setting the foundation for the plant. The measure, designed to revitalize domestic manufacturing and strengthen supply chains, was signed into law by the President in August.

"The combined efforts at the federal, state and local level paved the way for Micron to realize the largest private investment ever made in New York state history," Mehrotra said. "We are thrilled to make this significant investment in New York, making the Empire State the location of the biggest leading-edge memory site in the U.S."

Micron employs 48,000 people in 17 countries and is the fourth largest semiconductor company in the world.

"We chose this location for many reasons, but most importantly — central New York offers a rich pool of diverse talent, including communities that traditionally have been underrepresented in technology jobs," Mehrotra told Spectrum News 1.

The White Pine Commerce Park is a 1,200-acre site near Caughdenoy Road and New York Highway 31. Site preparation for the Micron complex is going to begin in 2023, followed by the start of heavy construction in 2024, the news outlet learned.

On a visit to Syracuse Oct. 27, President Biden pointed to Micron's decision to build the major semiconductor facility in the region as a harbinger of what is to come.

"A century ago, this region was the heartland of manufacturing, and now, the region is poised to lead the world in advanced manufacturing," Biden remarked from the stage at Onondaga Community College's SRC Arena and Event Center.

"We're here to celebrate one of the most significant investments in American history, and it's going to ensure that the future is made in America," he continued. "It's part of a broader story of the economy we're building that will work for everyone."

The building of a semiconductor fabrication, or chip fab, campus employing thousands of high-paying tech jobs, will undoubtedly lift the region's fortunes in a way not seen for decades, national experts told Syracuse.com, the online edition of the Post-Standard newspaper.

But there is one major obstacle that could slow that progress: Who will fill all those jobs?

The work of a chip fab — etching eight billion tiny transistors onto a silicon memory chip the size of a fingernail — is specialized, to put it mildly. That does not mean it requires a Ph.D., but every position requires some level of specialized training.

Even the construction jobs to build the facilities require special training.

That means high schools, community colleges and universities working in unison to prepare students for careers at Micron and related businesses, said Mike Russo, president and CEO at the National Institute for Innovation and Technology, a government-funded nonprofit that facilitates work force development for semiconductor companies.

"They should look at it as a generational change for that region, and really bring together a concerted effort to develop that talent pipeline," he noted.

Even before the new fab clean rooms are built, experts see some potential for a shortage of construction workers capable of overseeing work on them.

Micron's site in Clay will provide plenty of jobs for local building trades, but they will have to be trained and supervised by specialists who are familiar with the complexities of building a fab, said Joe Stockunas, president of SEMI Americas, part of SEMI, a global trade group representing semiconductor manufacturers and suppliers.

But those specialists are in limited supply, he told Syracuse.com.

Equipment in a fabrication plant is expensive and highly sensitive, Stockunas said. One of the key tools, a lithography system for putting integrated circuits on the chips, costs about $150 million. Any buildings housing them must be built and outfitted to exacting standards.

"I don't know anything that competes with this level of precision," he admitted. "The welders, the pipe fitters, the construction trades, they're all going to go through some sort of a training program, and then be supervised by folks who understand the complexities of what has to be done special."

More than 10 years ago, at the height of construction at Global Foundries, a chip fab in nearby Saratoga County, employed more than 3,500 workers on site and the company was spending $4.4 million a day on wages and materials. Russo, who worked for Global Foundries before founding his nonprofit, said there will be more competition now for workers to build fabs.

"If you are used to building an office building or a house, that's different than building a semiconductor fab," he noted. "There are definitely different skill sets involved."

The Syracuse area, and the northern suburbs, could experience rapid growth from the Micron endeavor. Now is the time to start planning for that, advised Dennis Brobston, president of the Saratoga Economic Development Corp., which helped lure Global Foundries to the small rural town of Malta.

"It's all about traffic," he added.

Even now, 13 years after Global Foundries broke ground for its $15 billion facility, the Malta area suffers from unanticipated traffic congestion on certain roads and intersections, he said.

Congestion is already prevalent on N.Y. 31 in and around the Micron property. State transportation officials have committed to spend $200 million on road and infrastructure improvements around the fab site, said Ryan McMahon, an executive with Onondaga County.

"Traffic will actually get better because of the improvements that will have to be made," McMahon explained to Syracuse.com.

In addition, central New York will need more housing, Brobston said, more hotels for construction workers and others with temporary assignments at the chip factory, as well as new daycare facilities and schools.

Micron's semiconductor facility in Clay is likely to draw employees from abroad, too, at least in the early years. When the plant starts production, as early as 2025, many of the first employees will be experienced staff from other fabs, Stockunas told the Syracuse news source. Most of Micron's manufacturing facilities are in Asia.

"They'll definitely be bringing in experienced folks," he said.

Semiconductors help convert power from a standard outlet into the electricity needed for any given electronic device. They are found in many everyday devices, from smartphones to appliances to vehicles.

The ability to use voice-to-text technology on your smartphone, advanced safety features in your car and precise medical imaging in doctor's offices depend on fast and accurate data, Mehrotra said at the SRC Arena.

Work in the memory space makes access to data easy, and therefore it is "at the heart of all of these technology applications today," he said. "We are the clear technology leader in memory, and we're now bringing that leadership in technology and manufacturing excellence to right here, in Clay, New York."

During the COVID-19 pandemic, demand soared for semiconductors, also referred to as "chips," and the United States scrambled to strengthen domestic manufacturing to stave off consumers' dependence on imported chips from overseas.