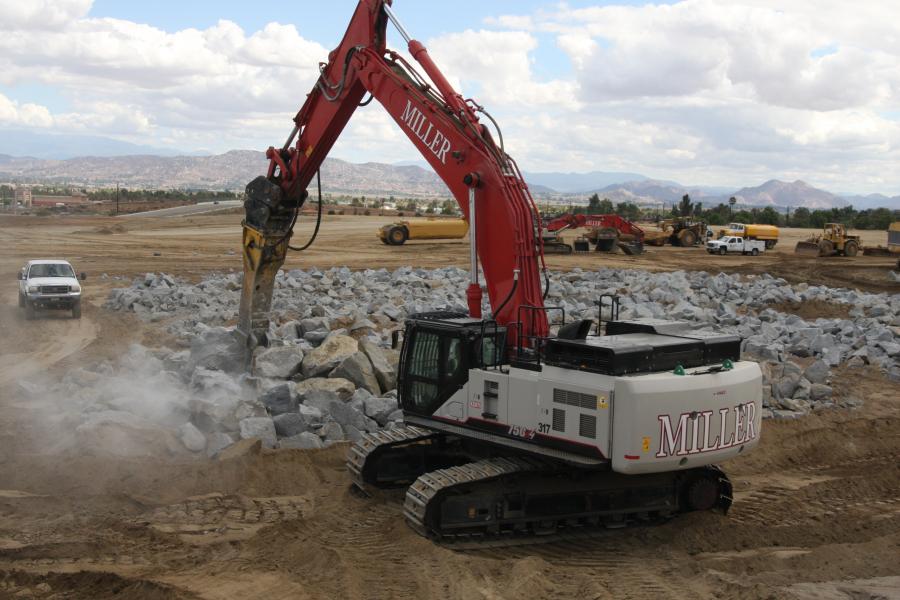 For most construction professionals, new excavator purchases are predicated on a number of wide-ranging considerations, including: current and future project demands, fleet upgrade requirements, environmental compliance, cost, and yes, even personal preference. Few things are as frustrating — or counter-productive — to an operation as having a machine sitting idly in a yard because it is either over- or undersized. For Miller Environmental, the search for a machine that could blend power, performance and economy began in earnest almost two years ago when a high-profile demolition job in Los Angeles was pending. That search resulted in the purchase of a Link-Belt 750X4 which met those criteria and, according to operators who smile when assigned the unit, a whole lot more. 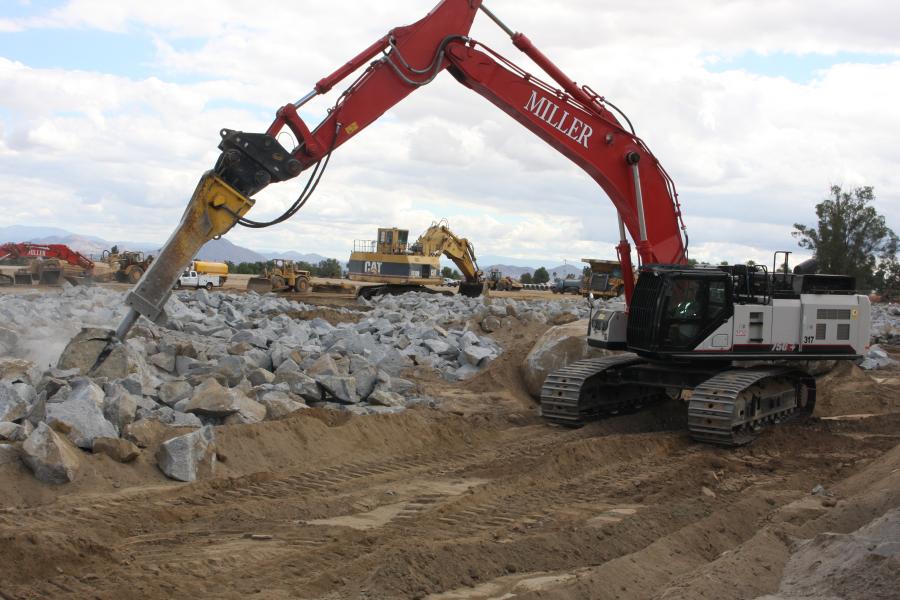 At a future industrial park site in Perris, Calif., Miller Environmental is using a Link-Belt 750X4 with an Atlas Copco hammer to downsize more than 60,000 tons of rock unearthed in the land clearing.

Established in 1999 as an abatement company with a focus on asbestos, lead and mold remediation, Miller Environmental built that end of the business while slowly adding small demolition projects to its list of services. As its reputation for quality demolition work grew, so too did the size of its projects. That, however, did not result in a wholesale upgrade in its equipment inventory, according to Dave Anderson, Miller's operations manager.

"From the time the company started getting demo work — even after they began getting larger projects — rather than incur the expense and upkeep of large capital purchases, Gregg Miller preferred to rent excavators and other equipment," he said. "Most often, he worked with a number of operated rental firms in the Los Angeles area. That arrangement continued for about the first eight years, at which point Gregg saw some benefits to equipment ownership and started building an excavator fleet of his own."

A separate entity, California Equipment Rentals, was formed to be the equipment arm of Miller and sister-firm GGG Demolition.

Today California Equipment Rentals' fleet — its excavator manufacturer of choice is Link-Belt — includes more than two dozen machines ranging from a 31,500 lb. Model 135, to the 158,300 lb. 750X4 mentioned above. 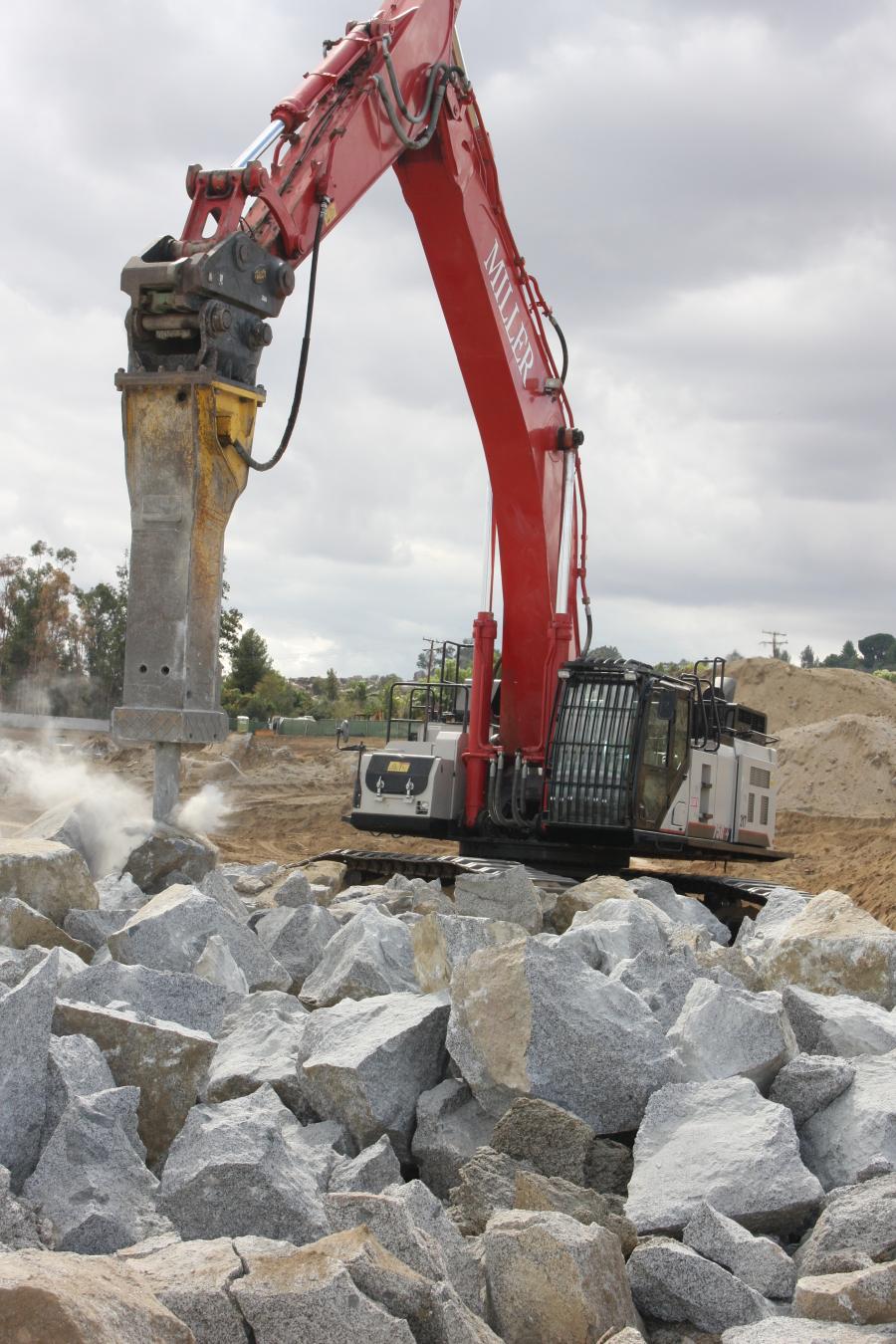 Pairing up the 750X4 with the HB7000 hammer proved the right combination for Miller's crew. Material — extremely hard blue and white granite — had to be reduced to 3 foot-minus size for removal.

For the larger, more demanding projects Miller undertakes, the company had been relying heavily upon an 800LX and gotten outstanding performance from the machine. However, a couple of factors — including the hours it had accrued, and a need to become fully Tier-IV compliant — told them it was time for a replacement.

"We do a good deal of work at LAX and at the various ports in the area, and the general contractors from those jobs now demand Tier-IV compliancy; the 800LX was a Tier-III machine," said Anderson. "In addition, we already had a project on the books to demolish a huge part of the Century City complex in Los Angeles and needed a machine roughly in that same size. So we talked to the folks at Bejac, who told us about the Link-Belt 750X4 and invited us to demo the machine."

The project Miller selected for the demo involved work for the new LA Rams stadium complex, a site that had previously housed the Hollywood Park Racetrack, a thoroughbred race venue.

"There were grandstands from the old racetrack that had been already leveled but the piles still needed to be removed," said Brian Thomas, one of Miller's operators. "Those pilings were some 50 feet in the ground, so I used the 750 to excavate around them and pull them all out. That was a great way to test the power of the machine. It really performed well — so well, in fact, that management pulled the trigger on the purchase."

Since its acquisition, Miller's 750X4 has filled its role nicely, starting in earnest with that Century City project. According to Anderson, while the project was fairly lengthy and presented some challenges, the machine helped keep them on track.

"We were out at Century City for about a year, and in that time, the 750 played a key role in the demolition of a ballroom situated atop a parking structure," he said. "From there, we took it to help on one of the latter phases of the Gerald Desmond Bridge demolition in Long Beach. Because that structure is about 80-feet tall, most of the initial work at was done with high-reach excavators equipped with breakers. But as soon as we got within the 750's range we switched to it because it had the power and control we needed for that application. Mind you, the design of the structure was hearty: concrete girders on the sides, a bottom soffit and a top deck — and everything was post-tensioned. But the machine was outstanding." 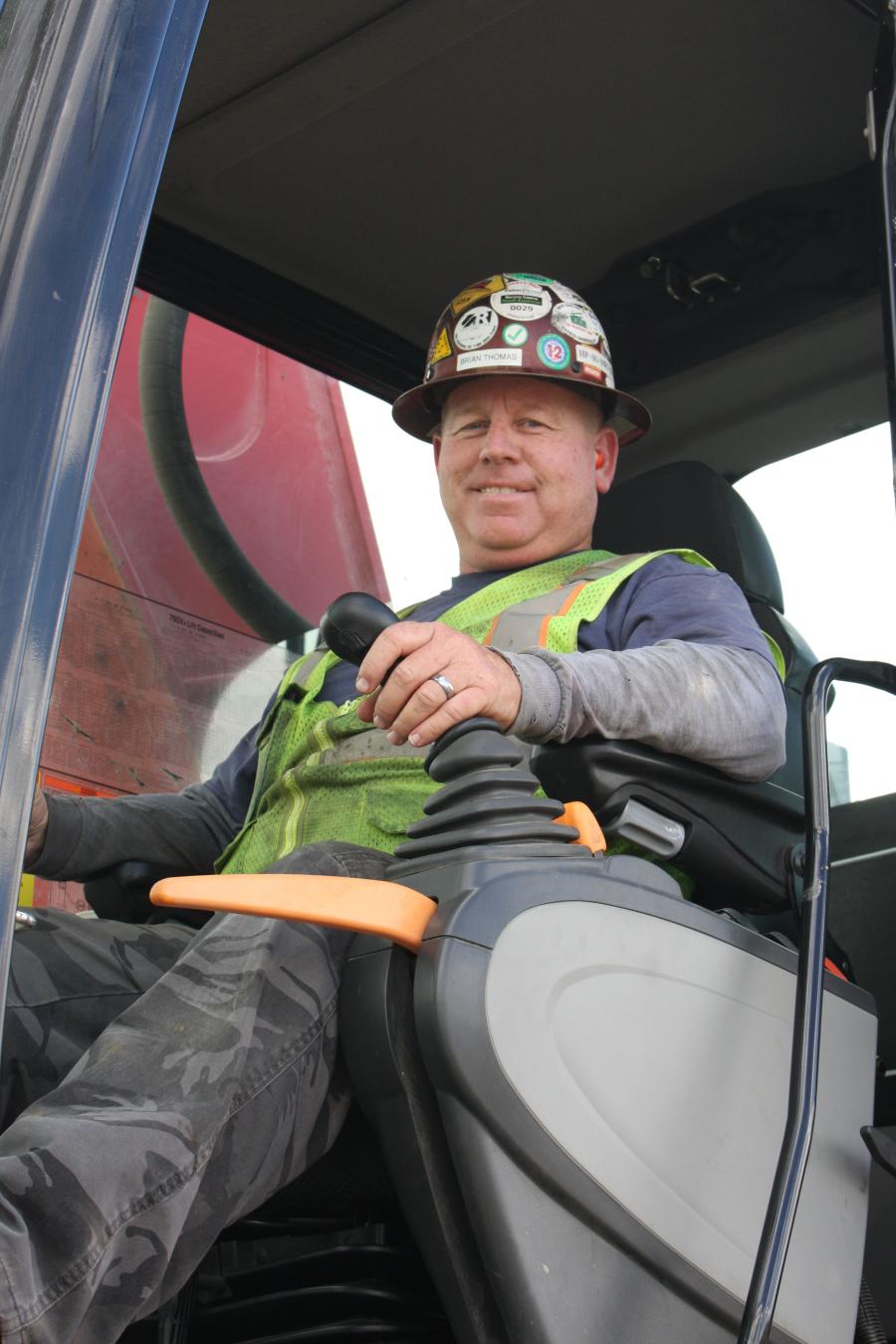 Miller's operator, Brian Thomas, said the attention Link-Belt paid to ensuring comfort in the cab is noticeable, particularly in a challenging application like rock-breaking.

Much of Miller's satisfaction stems from the fact that Link-Belt redesigned the control spools and incorporated spool stroke control (SSC) functions into the hydraulic system to minimize pressure loss and improve the distribution of hydraulic oil. The upshot to that effort is smoother movement and an 8 percent faster cycle time. The X4 series also provides three power modes (speed priority, heavy and applied power) which lets Miller's people choose the best combination of power, precision and fuel savings for the job. In addition, Link-Belt's RemoteCARE telematics, which comes with a free lifetime subscription, lets Miller remotely monitor and track the machine's location, performance, working status, routine and major service intervals and fluid levels, provides a geofencing capability to reduce the risk of machine theft, and more.

"Even compared to the 800LX, this machine is better on fuel, has less emissions, is comfortable to work in, and is quiet," said Thomas. "In fact, one day I was in the unit and talking to a dozer operator and he commented on how quiet — even at full throttle — this machine is. Things like that make for a better day in the seat."

If I Had a Hammer

The latest stop on Miller's 750X4's inaugural tour has been at a development site in Perris, Calif, about 15 miles south of Riverside. There, excavation and clearing for a proposed business park had unearthed massive boulders of blue and white granite which needed to be downsized prior to removal.

"Some of the boulders were the size of a small bus," said Thomas. "Initially, we'd had a different machine out there with a 10,000 lb. hammer, but quickly found that it was taking too long to get the material down to the 3-foot minus size the project demanded. So we brought in the 750X4 equipped with a 15,000 lb. HB7000 hydraulic breaker from Atlas Copco. Given the extreme hardness of the material and the fact that there was far more than the 60,000 tons originally estimated to be out there, it did a super job." 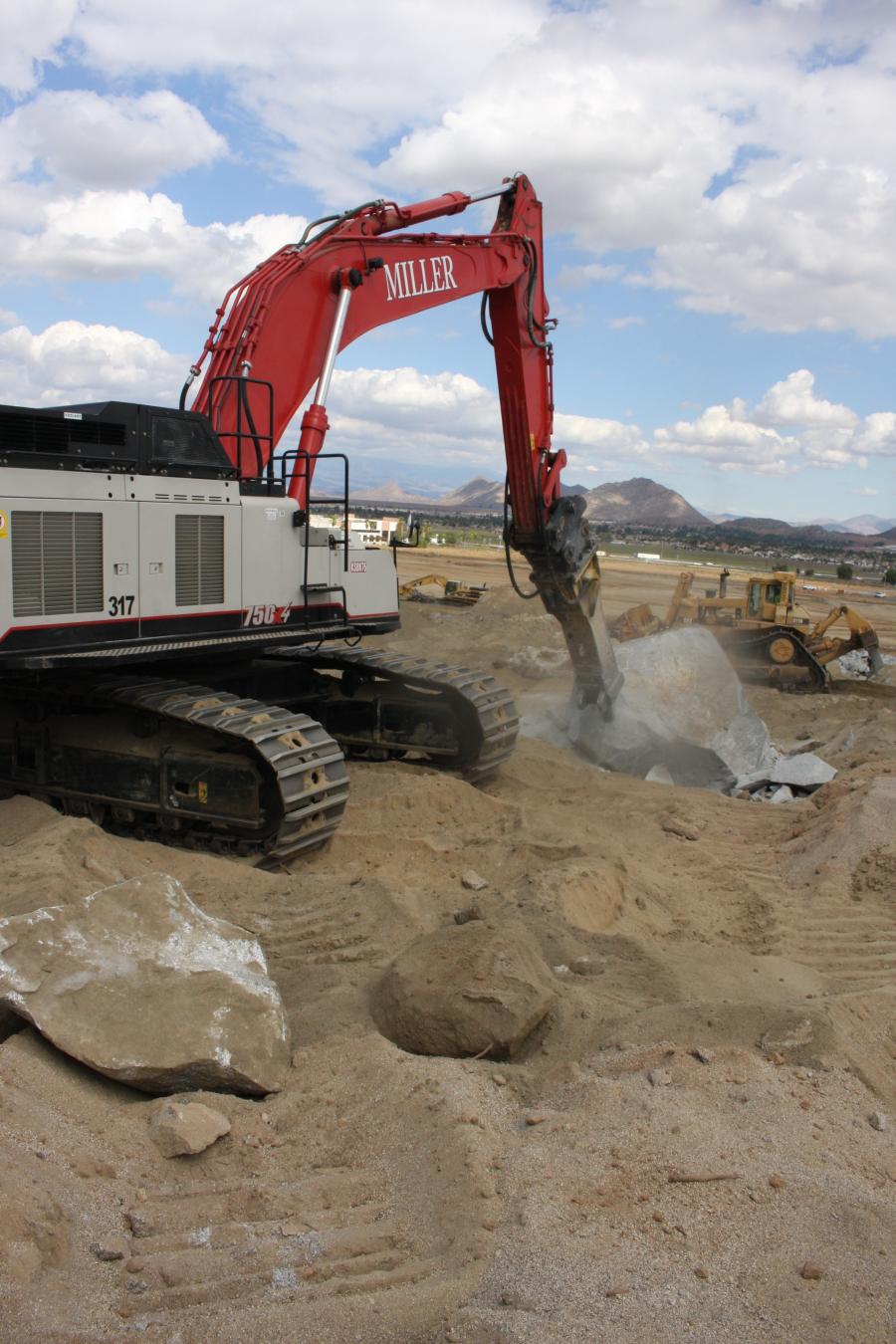 The performance of the 750X4 has proven so impressive for Miller Environmental at the Perris site and others around the L.A. area, that the company recently added a second identical model to its fleet.

While he admits that operating a hammer for 10 hours a day is no picnic, he is equally quick to point out that things are different with the new machine.

"The comfort Link-Belt built into these new excavators makes it so much more bearable — and in an application like rock-breaking, that's saying a lot."

A second 750 X4 was added to the fleet in December 2018 and will be returning to Perris for additional rock-breaking in April 2019.

It's been said that the true measure of a company's success lies not in how much it gets from the community, but rather how much it gives back. With that as a benchmark, Miller Environmental's social and philanthropic achievements are without equal. The company has long supported a number of charitable causes in and around southern California, including the ACE Mentoring program of LA/OC, Orangewood Foundation, The Merage Jewish Community Center of Orange County, American Cancer Society, Goals For Life, The AIDS Services Foundation Orange County, and Children's Hospital of Orange County.

"Gregg really works hard to allow others to benefit from this company's success through a foundation he's established," said Anderson. "There's no better example of that than the casino-themed gala they hold each year to raise money for Children's Hospital of Orange County. The support they get from so many of the area general contractors, equipment manufacturers like LBX, dealers like Bejac, and more, has just been amazing. The first event they held in 2016 raised $235,000 right out of the gate and last year's event in 2018 raised $615,000 — with all proceeds going to Children's Hospital and ACE. There's no denying the company's commitment to the community they serve."

Today the Miller Companies have grown to become oneof the largest contractors of its type in the L.A. metro area, with between 225 and 265 employees and annual sales in the $70 million range. More than just numbers however, the company has proven that good business acumen, coupled with great personnel and solid equipment decisions are the real keys to their success.

"Over the years, we've become known for the quality and reliability of our work and Gregg's relationship with the team at Bejac has helped us maintain that reputation," said Anderson. "They've always been there for us with both proven solutions and the latest technology, as well as the support to back it up. The success we're having with Link-Belt's 750X4 is proof of that. It didn't just fill a niche for us, it's become a key part of the overall puzzle."