As a testament to civic interest and enthusiasm for this bridge, an estimated 700 residents gathered on the new deck to celebrate its opening. 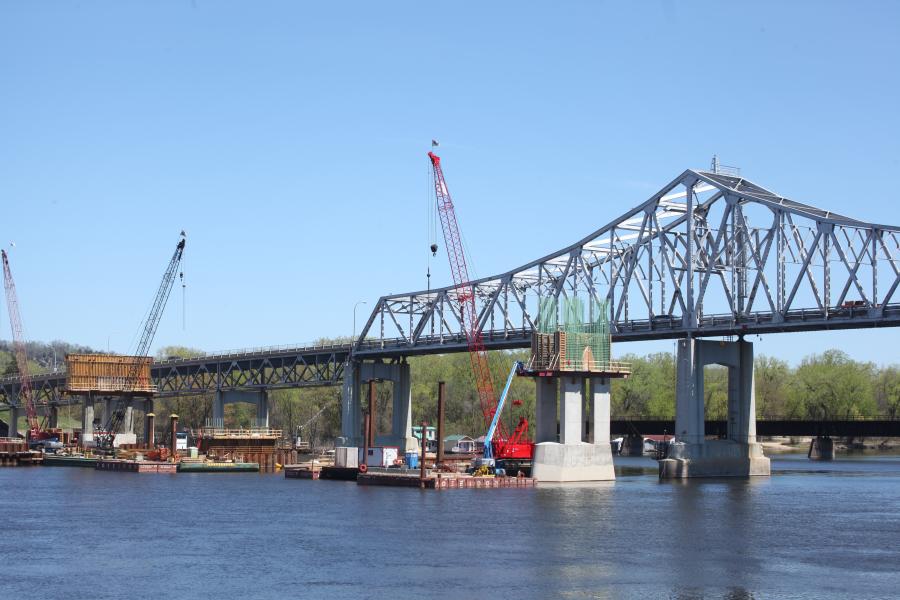 The through truss of the existing bridge, which opened in 1942 and is a historic landmark for the city of Winona, looms above the construction activity on the new bridge piers.

Located in Winona, 115 mi. (185 km) from the Twin Cities bordering Wisconsin in the southeastern bluff country of the state, the bridge recently opened to traffic.

MnDOT awarded the $78 million contract to Ames Construction, based out of Burnsville, Minn., with offices in the Midwest and western part of the country and Alberta, Canada.

Facing a very tight deadline and on the spot coordination a must, MnDOT chose the Construction Manager General Contractor (CMGC) process to push the four-year project onto the fast track.

According to Ames Construction, CMGC is an innovative contracting method that engages a construction manager during the design process. Using a phased plan with multiple work packages, CMGC allows new bridge construction to begin while still finalizing design.

MnDOT notified the company on December 21st, 2013 it was selected to build the bridge. The two agencies moved forward quickly.

In the spring of 2014, MnDOT awarded the four work packages to Ames Construction for the procurement of the H-piling, construction of the temporary access to the river, building the piers and the last work package picked up the remainder of the bridge and roadway work.

As a testament to civic interest and enthusiasm for this bridge, an estimated 700 residents gathered on the new deck to celebrate its opening alongside political leaders, MnDOT and Ames staff.

Acknowledging MnDOT and Ames staff working within the confines of an aggressive schedule, MnDOT project manager, Terry Ward, also gave credit to the CMGC procurement process to launch the design and build this bridge in two years.

“To be where we were in May, 2013 and have this bridge open in August, 2016, I can't speak enough how fantastic many, many people from across the country worked above and beyond to make it happen.

“We didn't have construction limits, we didn't have municipal approval, we didn't have any environmental permits, we had not started final design and not really started the right-of-way process; that's where we were in 2013.

“I can't tell you how pleased we are with the Ames team in terms of our first CMGC project. They've been very transparent with us and that helped us understand the process better,” Ward said.

When the ribbon cutting ceremony ended and traffic began flowing across the river, bridge crews hit the first major milestone in a four-year, two-fold project.

At the same time, the original, through truss structure completed in 1942 is on MnDOT's fracture critical list. It is also eligible for the National Register of Historic Places. This eligibility weighed heavily on the decision to rehabilitate it to keep it standing and build the new bridge to fulfill future traffic demands.

With the new bridge now carrying two-way traffic across the river, bridge crews shut down the existing bridge to begin the three-year rehabilitation work on the original structure.

The pair of bridges span .5 mi. (18 km) across the flowing Mississippi and connect the city of Winona to Latsch Island, a recreational area located on the Minnesota side of the river.

With the help of a design review that included the residents and leaders of Winona, a cantilever box girder design was chosen. With a flatter look and lower profile, the new bridge does not interfere with the panoramic view of the towering steel trusses on the historic bridge; which are an iconic landmark for the city. Cost and migratory bird flights also were critical concerns.

Originally, in the spring of 2013, MnDOT staff viewed right-of-way (ROW) acquisition as a determining factor in pushing the project start date out another year to 2015, Ward said.

Twenty-nine residential and business properties had to be moved from two blocks of the city at the bridge's touch down location.

At this time, “I sat down with our right-of-way (ROW) engineer and we developed a work package concept that allowed us about one year of time to start construction and not impact the ROW schedule. We didn't need any ROW until work package four which basically began in 2015,” Ward explained.

Within days of agreeing on a work package schedule with Ames Construction, MnDOT began the ROW acquisition process.

“The work package approach allowed us to address some of these time sensitive elements that can affect traditional projects like ROW acquisition and environmental permits,” Ward emphasized.

With a July, 2014 start date for construction and what Ward called a “tremendously aggressive start,” and as ROW acquisition continued, Ames workers and equipment moved in.

Bringing in approximately 100 trades people to build the bridge, they would rely on dozens of pieces of heavy equipment. The equipment roster included Cat excavators, dozers, graders, JLG lifts and a half dozen cranes including heavy duty Manitowoc and Terex models to build the bridge.

The geology of the river bottom worked in the favor of MnDOT and Ames engineers for the foundation work.

“We were able to work with the designers to finalize the river pier foundations early because of the fairly uniform depth of bedrock.

“By finalizing the foundations and allowing the designer to go on with the rest of the bridge design, we had the pilings on the job about the time we needed them,” Ward said.

As the barges carrying the H-piling plowed upriver against the Mississippi current and began arriving from a fabricator plant in St. Louis 520 mi. (840 km) away, workers and equipment began digging in.

Manitowoc and Terex cranes began pounding the sheet piling for the dock and river access. Truckers rolled in to dump sand while dozers and rollers pushed the river bank further into the river for the required temporary access.

Zeroing in on the first major deadline of the bridge construction schedule, crews safely closed off from the flowing river 40 ft (12.2 m) below its surface inside steel sheet pile cofferdams worked through the snow and cold of the winter of 2014 and 2015. The goal, to poke the piers above the high water mark in anticipation of spring flooding.

Fighting the ice and cold of that first winter, by the spring of 2015, all three river piers had been built above flood level. Sub structure and super structure work followed. By late fall of 2015, cast in place concrete work began.

Using a system of traveler forms and a post tensioning cable system, bridge workers casted 16 ft (4.9 m) segments on one side of the river piers and then on the other to balance it.

There was no break in the action during the second winter either, keeping workers busy again in the snow and cold to pour high quality concrete in varying temperature conditions.

“To work that second winter and to pour that many, many segments in the dead of a Minnesota winter and maintain a high quality product in terms of concrete and temperature, that was just a fantastic effort,” said Ward.

And to date, there has not been any lost time accidents yet which is a fantastic commitment to safety, Ward said.

With the bridge work, Winona residents and interstate motorists will see an improvement in geometrics at the west side of the bridge landing in Winona.

Traffic coming off the existing bridge into Winona had a free flow movement while the other three legs of that intersection were stop controlled.

“It was somewhat unconventional,” Ward said, “and had fairly high crash rate.”

A new signal system recently installed will improve the traffic control there and make it a safer intersection.

The intersection geometrics and timing include a free right turn, a through lane and a left turn lane coming off the new bridge and what “we think are significant safety and geometric enhancements” for the intersection, Ward said.

It was a project that generated a lot of public interest, said MnDOT's information officer Michael Dougherty. To keep the public tied into the project, Dougherty relied on what he calls “a robust project web site” to keep the community and drivers updated on progress or traffic changes. A Facebook page and regular email updates were also part of the communications plan.

Seeing this project as a great teaching opportunity, MnDOT brought the bridge project into the classroom from elementary schools to graduate level classes, Dougherty added.

With work winding down on the new bridge and shifting into the rehabilitation work, Ward expects to have all punch list work for the project completed by late this fall.