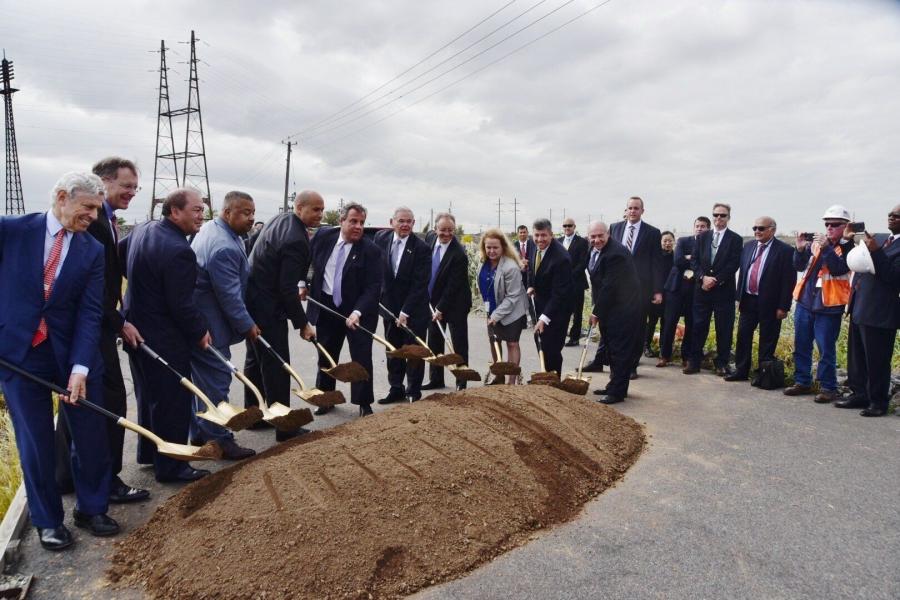 Officials, including Republican Gov. Chris Christie, attended the ceremony near the Portal Bridge over the Hackensack River.

KEARNY, N.J. (AP) A mock groundbreaking near a century-old rail bridge highlighted the stalled funding for a massive project to replace it and build a new rail tunnel under the Hudson River into New York City.

Officials including Republican Gov. Chris Christie attended the ceremony near the Portal Bridge over the Hackensack River. They posed with shovels in a pile of dirt that had been placed on top of an asphalt roadway.

At between $1 billion and $1.5 billion, the replacement of the 107-year-old bridge is a comparatively small component of the wider Gateway project, which aims to build a new tunnel and revamp New York's Penn Station and is estimated at well over $20 billion.

The bridge, which swings open to allow boats to pass underneath, is seen as just as important in the big picture, however, as it is a source of delays when it occasionally becomes stuck. About 200,000 passengers and 450 trains cross the bridge each day, and the delays can ripple up and down the Northeast Corridor between Boston and Washington, D.C.

The bridge project also is the furthest along: Environmental approvals have been awarded, and all that stands in the way of the beginning of construction is the commitment of federal dollars.

That commitment was thrown into uncertainty when President Donald Trump's proposed federal budget appeared to jeopardize the project's ability to gain access to a federal grant program promised during President Barack Obama's administration.

Some preliminary construction activities, such as installing new fiber optic cable poles and a retaining wall, have begun. Officials have said in recent months that full construction won't begin until March, at the earliest, even if federal funding is made available now.

Christie and Democratic New York Gov. Andrew Cuomo, along with several members of the two states' congressional delegations, met with Trump in September at the White House. No decisions were made, but those who attended said they were optimistic.

Christie said he expected Trump, a fellow Republican, to make the money available.

“He knows exactly what we want. I've spoken to him on many occasions about it,” Christie said. “The full replacement of this bridge is happening, and I absolutely believe we will see, within the next year, the beginning of construction on those tunnels.”

A new tunnel has lately been estimated to cost about $13 billion. A final environmental statement, a required precursor to construction, is expected to be released next spring.