Modern said that it understands that a critical component of a customer’s overall experience with a machine is the parts and service support they receive from the manufacturer and their local dealer. 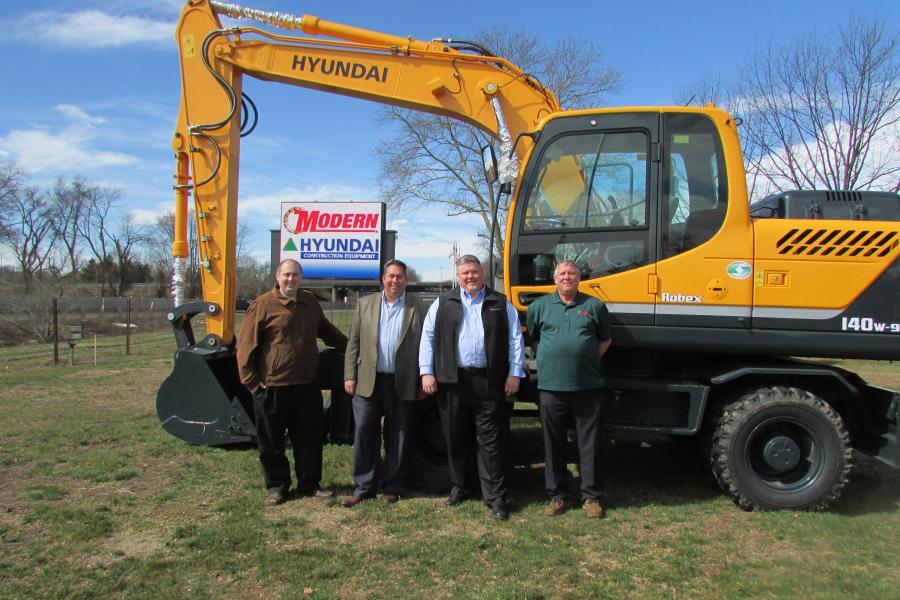 When Modern Equipment was named the Hyundai Construction Equipment dealer in New Jersey and Eastern Pennsylvania, it became a source for the manufacturer's full range of heavy construction products from wheel loaders and excavators to high capacity mini-excavators.

The deal was finalized in December 2015, and customers remain excited by the news, according to Rick Nelson, vice president and general manager of Modern Equipment & Supply.

“They like the quality, they like the warranty that stands behind the equipment. For example, PennDOT has been using Hyundai wheel loaders for the past seven years. That contract came up for renewal back in October of 2015 and we were able to help renew Hyundai as the 28,000-pound machine in that contract, which is an HL940.

“One of the key differentiators of the Hyundai product is the overall value proposition it presents to the customer,” said Nelson “These machines offer an excellent initial cost of ownership. This owes in large part to its industry leading warranty and host of standard features, while competing brands only offer them as paid upgrade options. When combined with an excellent ongoing cost of ownership the value of a Hyundai begins to set itself apart.”

Sam Maury, Modern's general manager of heavy construction equipment, said, “Much like Hyundai did in the automotive business, they are coming to the table with an exceptional machine that is pretty much loaded up with all the bells and whistles within reason at an excellent price point, with a warranty that a lot of people have a hard time touching without tacking on a lot of extra money.”

The 8,000-lb. mini-excavator, for example, comes standard with air conditioning, heat and closed cab and sun roof and a three-year, 3,000 hour warranty, according to Mark Dombrowski, sales manager of Modern Equipment.

Modern said that it understands that a critical component of a customer's overall experience with a machine is the parts and service support they receive from the manufacturer and their local dealer.

“The last time I was out at Hyundai, they were running a 97 percent fill rate out of their Norcross, Georgia, facility. Modern has continually invested in its Central Parts distribution system based out of Bristol, Pennsylvania, and has committed to stock a wide range of high demand Hyundai parts across all branches,” Maury said.

In preparing for the new line, Modern has selected some of its heavy equipment technicians and has initiated extensive training programs with the support of Hyundai and Cummins.

The company currently has 12 road technicians supporting Hyundai and it recently bolstered the capabilities of those road technicians with the addition of two brand new Peterbilt service trucks with crane and utility body modifications.

“We are bringing inventory in. We have ordered 70-plus machines,” said Nelson. “We will have a full representation of the heart of the Hyundai line in stock. If it's not here or at one of our locations, its in the works of being released and shipped to us — from their 65,000-pound wheel loader down to their 23,000-pound wheel loader, from their 17 series mini-excavators up to their 380.”

Of those 70 machines, 25 or 30 will end up in inventory. The balance is already sold, according to Maury.

Back to Its Roots

“In the past we were known as a rental company, but five years ago a strategic decision was made to exit the general rental business. There was a purposeful shift back to the true dealership model with a renewed focus on taking care of our customers though outstanding sales, service, and parts distribution capability,” Nelson said.

“The improvements made under the dealership model is probably most evident in the success Modern has enjoyed with the Bandit line of hand-fed chippers and stump grinders,” Nelson added. “Modern is perennially a top global dealer with a large and growing customer base, which has come to rely on Modern for all their service, sales and parts needs in what can often to be a demanding and fast paced industry.

“Our prior history in the heavy construction business allowed the integration of Hyundai into Modern's product offerings perhaps simpler than it otherwise would have been. Our new relationship with Hyundai brings us back into a business we were already in with New Holland heavy construction when they participated in this market. That is not to say we have underestimated the inherent challenges, which come with this business. In order to best prepare ourselves to serve this market and our customers the decision was made to split Modern Equipment and Supply into two subdivisions: A Construction Division, specializing in heavy dirt engaging equipment, compaction equipment, truck, rough-terrain and all-terrain cranes; and an Arborist Division, focusing on the smaller dirt equipment, chippers, stump grinders, boom trucks, and supporting equipment.”

Modern's Hyundai efforts will be headquartered in Bristol, Pa., and Edison, N.J., but there will be a presence in every location the company has.