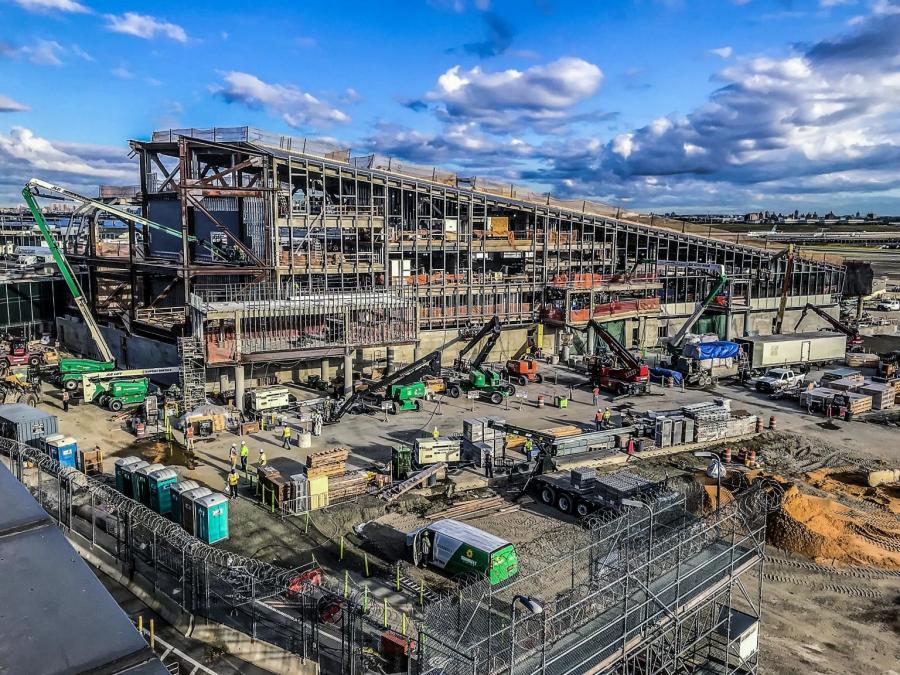 This is the new western Concourse at Terminal B, a near mirror-image of the eastern concourse that opened in December 2018. The existing Terminal B is to the south, operational gates at an existing pier to the west, an active runway to the north and demolition and airside paving to the east. (Christopher Villari photo)

It's been called the most significant new airport project in the United States in more than 20 years. Modeled on the vision outlined by New York Gov. Andrew Cuomo in 2015, this project will transform the cramped, poorly lit and dirty LaGuardia Airport into a unified, 21st Century terminal system with improved transportation access, 8 mi. of roadway, 24 new bridges, additional airside taxiways and world-class passenger amenities.

Five years ago, Cuomo unveiled his vision for a comprehensive redesign of LaGuardia Airport, citing the need to update a layout consisting of multiple, fragmented terminals. It was the realization of a report titled, "A 21st Century Airport for the State of New York: The New LaGuardia — Guiding Principles for a Comprehensive Airport Master Plan," commissioned by the Airport Advisory Panel he established.

The $8 billion project, which is 80 percent privately financed and LEED Silver certified, will be the first entirely new major airport in the nation in 25 years and calls for transforming the facility into a single, structurally unified state-of-the-art main terminal with expanded transportation access with a future AirTrain, parking garages, additional taxi lanes, substations, new roadway and utility networks, significantly increased taxiway space and improved passenger amenities.

Promising to "build the airport that New York deserves" by modernizing and transforming the airport with the worst reputation in the nation into a world-class transportation hub to meet the needs of today's travelers, he said, "We are transforming LaGuardia into a globally-renowned, 21st Century airport that is worthy of the city and state of New York."

The overall project involves tearing down all of the airport's existing buildings and roadways, making it the "most extensive airport construction project anywhere," according to Port Authority Executive Director Rick Cotton.

LaGuardia Gateway Partners, a new public-private partnership of airport experts chosen by the Port Authority of New York and New Jersey (which operate the airport) to oversee the work to modernize the airport through a comprehensive redesign is a consortium of firms with extensive experience in terminal operations, construction, design and finances. Members include Vantage Airport Group, which manages nine airports across three continents; Skanska and Walsh Construction, a construction joint venture; HOK and Parsons Brinckerhoff, a design joint venture; and Vantage, Skanska and Meridiam, a global infrastructure investment fund. 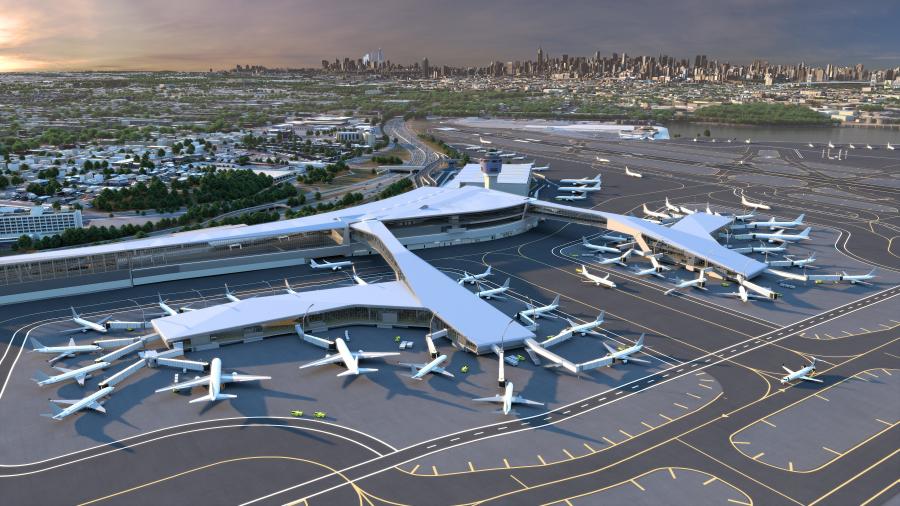 Construction of the new unified airport includes new terminals to replace the existing terminals B, C and D, an improved roadway system, new parking infrastructure and additional related projects. Concourse A is currently under design.

For the most efficient use of LaGuardia's geographic footprint, the new terminal facility is being built closer to the Grand Central Parkway. The redesigned facility also will utilize an island-gate system, in which passengers access their gates via raised pedestrian bridges from the headhouse to the concourses. The gates are high enough for aircraft to taxi underneath.

Together, the relocated terminals and island-gate system will create nearly two miles of new taxiway space. This will permit more efficient circulation of aircraft and reduced taxi-in and taxi-out times, which will yield shorter and fewer gate delays as well as overall reduction in carbon emissions from idling aircraft.

The creation of one main, architecturally unified terminal began with the demolition of the existing Terminal B building, which was operated by the Port Authority, and replacement with a larger structure, located closer to the Grand Central Parkway, that includes new terminal space and a new Central Arrivals and Departures Hall, and links to Delta's Terminals C and D. This represents the western half of the new structurally unified terminal, according to Alana Calmi, Port Authority senior public information officer.

The eastern half of the new unified terminal will be constructed on a parallel track by Delta Air Lines redeveloping its existing terminals closer to the Grand Central Parkway and connecting them to the new Central Arrivals and Departures Hall.

The new LaGuardia Airport will offer a total of 2.7 million sq. ft. at one of the nation's busiest airports.

This is the largest public-private partnership in U.S. aviation history with two-thirds of the cost being covered by private investment.

Totaling about half the entire budget, Terminal B will cost approximately $4 billion in design and construction, Calmi reported. "It is being constructed and opened in phases with key elements opening this year."

The main building is scheduled to open in 2020, she continued, with the final gates being completed in 2022. "Terminal C, at approximately $3.6 billion, is also being constructed in phases."

New gates began to come online in 2019 and the main terminal is planned to be operational in 2021. The final gates will continue to open in phases and will be complete in 2025.

Following the demolition of the old Pier A that allowed for the remaining gates to open in the new eastern concourse, demolition began on the existing Pier B. Pier B demolition was completed in Summer 2019 and utility work and concrete placement is ongoing in the area, in preparation for the western concourse activation in 2020.

Roadway construction, pile driving for Terminal B and demolition of a parking garage kicked off the project. By January 2017, steel erection for the eastern concourse had begun, along with setting of precast concrete structures for the new parking garage for Terminal B. It was completed in late 2019.

The summer of 2017 witnessed groundbreaking for Terminal C, while the Terminal C headhouse steel erection didn't start until May 2017, with pile driving commencing almost a year later. The headhouse — the main portion of the terminal — is projected to open by mid-2020, as will the first gates in the western concourse.

Steel erection is complete and exterior framing is in progress on the first phase of the new western concourse that will house Terminal B's remaining 17 new gates.

Work is in progress on the headhouse, with the glass curtain wall and roof now complete. Inside, testing and commissioning of the new baggage handling system is underway, along with a variety of HVAC, electrical and plumbing systems. Installation of tile and carpet is under way throughout the facility.

Work continues on the pedestrian bridge that will connect the headhouse to the new eastern concourse. Steel now spans the existing terminal headhouse and the bridge will eventually span the taxi lane.

Terminal B broke ground in June 2016. The Port Authority debuted the first part of the new Terminal B on Dec. 1, 2018 with the opening of the first 11 of 18 total gates in the new eastern concourse. Currently, 16 gates are operational. Terminal B main arrivals and departures hall is expected to open mid-2020.

To allow the existing terminal to remain operational during the redevelopment of the new Terminal B, the facility is opening in phases, consolidating construction timing to better serve passengers and ensure that there are as few disruptions as possible.

The new Terminal B includes the main arrivals and departures hall, where ticketing and check-in, security, baggage claim and the main commercial district is located, and two concourses, featuring a total of 35 gates.

Dual pedestrian bridges will span active aircraft taxi lanes — the first in the world — and connect the main part of the terminal to two island concourses. Passengers will walk above planes as they make their way to the gate, with views of the iconic Manhattan skyline in the background. The island and bridge were designed to increase taxi-way space for planes.

The new facility is "common use" to increase operational efficiency, meaning that any Terminal B airline can use any gate.

The new garage opened in February 2018, with 3,100 total spaces, more than 2,400 of which are designated for personal vehicles. It features enhanced signage throughout terminal, along the walkway connector and in the garage.

Delta Airlines broke ground on the new $4 billion Terminal C in August 2017. The New Delta Terminal Project at LaGuardia will replace their existing C and D Terminals with the new Terminal C scheduled to open in late 2021.

The new terminal will consist of 37 gates located on four concourses connected by a centralized check-in lobby, security checkpoint and baggage claim. It will feature a new, larger Delta Sky Club with a Sky Deck, wider concourses, larger gate holdrooms and more seating, as well as 30 percent more concessions space than the old terminals C and D. The gates will have access to dual taxi lanes, which will greatly improve airfield efficiency, resulting in reduced taxi time to and from the gate before take-off and after landing

The new terminal complex will open in phases, beginning with the opening of Concourse G last fall.

AirTrain LGA will provide a reliable 30-minute trip to LaGuardia Airport from Midtown Manhattan, with other stops that allow passengers to transfer to/from the LIRR or 7 subway line. It aims to reduce traffic on Grand Central Parkway and local streets, and ease on-airport parking constraints, with plans that include providing a connection with existing public transportation at Willets Point, helping to relieve vehicular congestion at LaGuardia.

The Port Authority budgeted $2.05 billion in its 10-year-capital plan for AirTrain LGA.

"Site logistics is a big challenge," said Dan Nola, project manager, Skanska. Despite it being such a large area, he said there's not actually a lot of space to maneuver, with so many trades onsite.

Calmi said the biggest challenge has been "keeping the airport fully operational while undergoing a massive, multi-phased redevelopment plan requiring the construction of a new airport on top of an existing one while remaining fully operational." 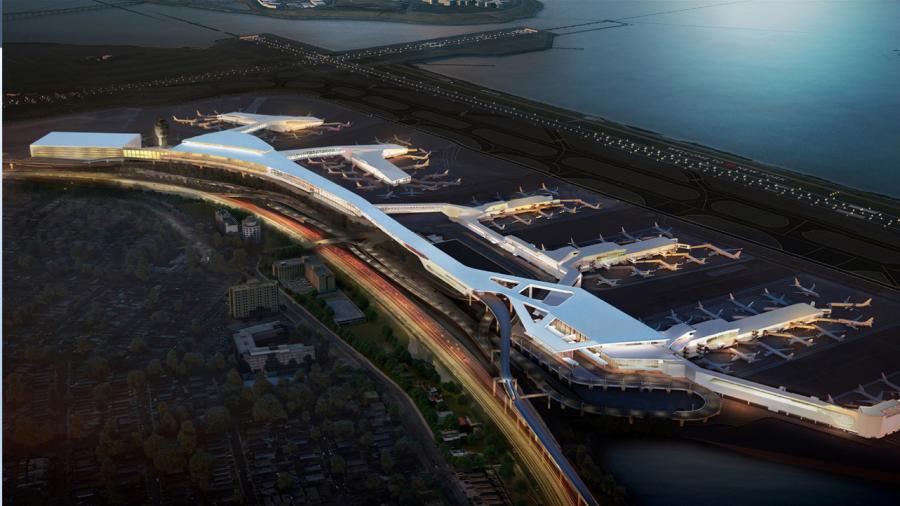 Throughout this multi-phased construction, LaGuardia has continued normal operations and has handled record number of travelers every year; 2018 saw just over 30-million passengers. This project is, in essence, the construction of an entirely new airport on top of an existing one, while keeping it fully operational.

"By opening portions of the airport in phases, we are able to maintain full operations while continuing construction," Calmi said. Additionally, she continued, challenges include minimizing customer inconvenience and any inconvenience to the communities surrounding LaGuardia's uniquely small geographic footprint.

LaGuardia Airport is 680 acres, compared with JFK, which has 5,200 acres, making this project even more difficult. Cuomo characterized LaGuardia as "the size of a large postage stamp," adding, "The parcel is very small. We're now building a new airport at the same time we're operating the existing airport on a very, very small footprint, and that's the structural challenge."

At peak construction, more than 1,000 trades have been on site at once, Calmi said, working multiple shifts.

"There is work six days a week," she said. "Occasional second shift and some overnight work is required. Overall, it is close to 24/6."

There are currently 75 ironworkers on the project, but Nola said that number will climb to 125-130 in August, when a second shift is added to help meet deadlines.

A project of this size requires "all types" of equipment: equipment being used, Cami said, "large cranes for steel erection; excavators and pickers for roads and utilities, and many lifts for interior and architectural work."

Nola indicated that there are currently eight or nine cranes working on site, between the steel and pile driving work.

The New York Daily News recently reported that construction has slowed due to more than 20 people working on Terminal B testing positive for the Coronavirus. Construction at the terminal is broken up into more than 12 separate work areas, all overseen by Skanska. Work halted at a job site at Terminal B's western concourse last month after an employee there tested positive for COVID-19, according to Skanska spokesman John Schiumo.

Despite a worker shortage due to illness, self-quarantining or other reasons, Cuomo said he considers construction at LaGuardia essential. "A lot of these projects, once you start you can't just stop," he said. CEG