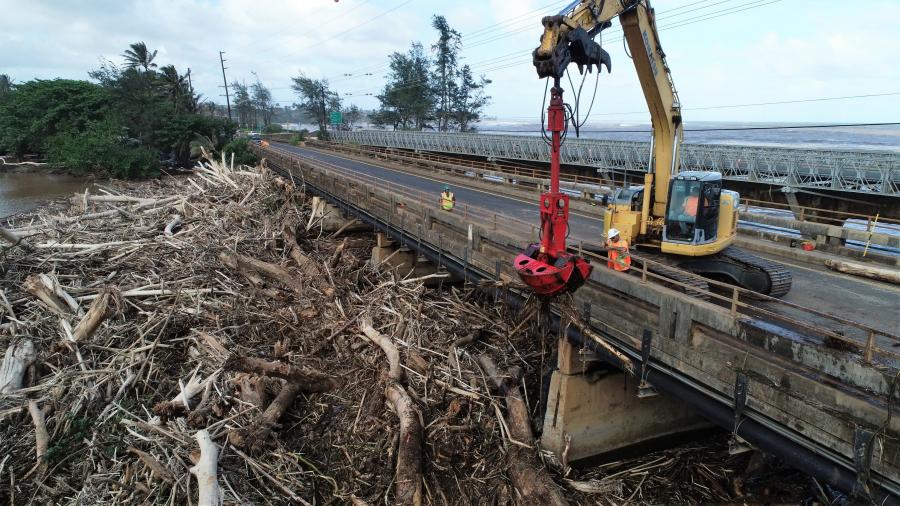 Cushnie used two excavators and a fleet of trucks to remove tons of debris that had washed down the river and compromised the integrity of Kauai’s Wailua Bridge.

Nothing good can come of a severe thunderstorm unless you happen to be on the receiving end of an emergency contract to clean up the aftermath. Cushnie Construction Company Inc. encountered this situation on the island of Kauai in Hawaii starting on March 16, 2020.

"We had a hell of a flood on the island with 20 inches of rain," said the company's Vice President, Ralph Cushnie, noting that he believes this storm was a record breaker. "A bunch of debris came down the river and we basically had a log jam of debris at the Wailua Bridge."

The main problem was heavy erosion damage to the concrete reinforced wall near the north abutment of the bridge, and scouring that was causing instability around several piers, according to Hawaii Department of Transportation (HDOT). Cushnie was already clearing nearby flood-damaged areas and owns a unique clamshell attachment so HDOT decided to award the contractor the emergency contract.

The first challenge was a 120-ft. uprooted tree that was swept downstream and came to rest against the side of the bridge. Cushnie's crews worked around the clock for a week to get it removed.

More debris soon followed, but fortunately the raging river never rose high enough for the debris to breach or pass over the bridge.

"Another big rain like this could have knocked that whole bridge over," Cushnie said.

Clearing debris from the bridge was job one. Overhead wires prevented the use of a long-reach excavator so Cushnie set up two excavators on the one-lane bridge deck. The machine with the clamshell scooped out the debris and piled it on the deck where a five-man crew downsized it to manageable sections with power tools. Another nearby excavator with a grapple loaded the material into waiting trucks.

The next step was to get the debris to the processing sites. Desirable laydown areas were at a premium because of the flood so Cushnie dumped half in a stadium parking lot and the remainder at two other locations. The problem that remained was how to process the material efficiently.

Searching for the Right Attachment

"We had started grinding the logs and they were too big for our shredder to deal with," Cushnie recalled. "We were just looking on the internet for something and we came across Ransome Attachments and the Black Splitter cone splitter," he said.

The problem was that he didn't want to lose time on the extra processes associated with hydraulic attachments, including switching hoses and unpinning buckets.

The alternative was to mount a hammer on the excavator to split the wood, but damaging the pavement in the stadium would have been unacceptable.

Cushnie learned of the Ransome Shark Tooth RST 150 stump splitter/harvester. It had the functionality, but its single serrated edge is designed for sawing and digging out rooted stumps.

Adding Teeth to the Shark Tooth

The Shark Tooth has a serrated edge on the outside blade with a flat edge and thumb on the opposite side, which works well for its primary purpose – splitting, removing and loading stumps. Cushnie's operation called for more teeth because the crew would have to quarter wood on flat surfaces where the timber is not anchored.

"We had nothing to anchor to," he said, noting that they were cutting on pavement at the stadium and dirt in the other locations. "We were going to put the tooth in and then work it back and forth."

The clock was ticking. Ransome quickly agreed to modify the attachment by adding a second serrated edge, creating an attachment that looked like a spade with jagged edges.

"The reason we wanted the front edge serrated is because we were basically just pinning the wood to the ground and then wedging the point into it," Cushnie explained. "When you uncurl the arm of the excavator, you're getting that cutting action on the front edge, while going back and forth and wedging and splitting at the same time."

The role of the Ransome Shark Tooth stump splitter/harvester was to size down material for feeding into the Crambo 6000 dual-shaft shredder. The shape of the logs was a factor as well.

Dropping a log without a flat edge into the Crambo shredder would be like running on a log in the water, according to Cushnie." If you put one of those six-foot logs in the hopper it would roll around for an hour in your shredder," he said. "If you halve or quarter it, it's got that straight edge so the Crambo can bite into it and start shredding."

The majority of the wood came from albizia, a tree that has been deemed an invasive species in Hawaii. The wood was a bit softer and stringier, but splitting it was still challenging because the trees were still green since they had just been uprooted.

The Shark Tooth delivered adequate power, despite being mounted on a mid-size Komatsu excavator.

"It was all green so it took some effort," Cushnie said. "Once it dries out, you just tap it and it splits."

Much of the smaller debris was loaded into the Crambo with a standard bucket. The Shark Tooth was required for splitting stumps and logs over six feet. Chainsaws were used to get the largest pieces down to that size.

Most attachments that Cushnie looked at required thumbs to be unpinned, which would have reduced productivity. The Shark Tooth's can attach to a quick coupler and works in conjunction with an existing thumb. This allowed Cushnie to split and load the Crambo in one continuous process.

The debris was ultimately processed into mulch and given to a local coffee farm and landscaper. No one can accurately predict whether Kauai will see a storm of this magnitude again but one thing is sure: Cushnie will be prepared with the right equipment.

The Ransome Shark Tooth stump splitter/harvester was mounted on a mid-size excavator to size down logs and stumps for processing by the Crambo 6000 Dual-Shaft Shredder.