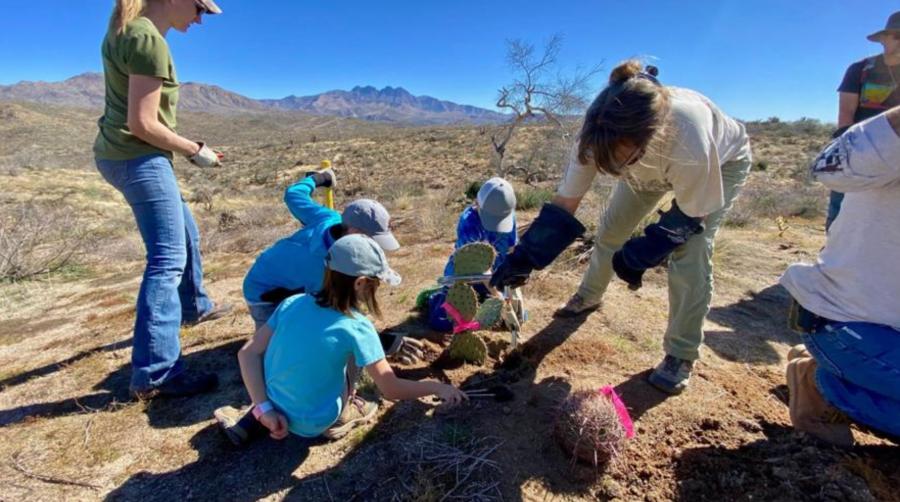 A major federal infrastructure bill combined with the megafires that have consumed whole communities in California and Colorado in the last couple of years have knocked loose millions in federal grants for thinning projects to protect forested communities.

"The reality is we live in a forest. The other reality is the forest burns," said Payson Fire Chief David Staub during Gila County's annual fire meeting in March. "If you can't reconcile that in your mind, perhaps this isn't the place for you to live."

Homeowners can clear their own property, but the overgrown forest at the edge of town also desperately needs clearing. A century of logging, grazing and fire suppression have increased tree densities on millions for acres from about 50 per acre to more like 1,000 per acre — with roughly 50 tons of downed and dead wood on each acre. The result has been a plague of megafires, that have consumed whole communities.

The northern Tonto National Forest has some of the highest wildfire danger ratings in the country, said Taiga Roher, the fire staff officer of the Payson Ranger District.

"For region 3 — Arizona and New Mexico, three of the top 10 fire sheds are in Payson and the Rim Country," said Roher. "That means that is where the Forest Service will wind up focusing a lot of money."

Already, Gila County has received millions of dollars both for forest clearing and for post-fire flood control, said Supervisor Steve Christensen. After the meeting, he said the region could see up to $59 million.

The money has come from a combination of the federal infrastructure bill, earmarks in the current federal budget bill and money the Forest Service has added to the Four Forest Restoration Initiative.

"Last year the county received $6 million for flood mitigation from the Telegraph Fire," he said. "$6 million is coming to the northern Tonto Forest for mitigation."

Where Do Fires Start?

Last year, close to a million acres burned in Arizona. Fire officials fear this year could be even worse — depending on when the monsoon puts an end to the fire season. The danger is especially acute because of the large number of people driving through the forest.

Roher dramatized the point with a map showing every fire start in north Tonto Forest in the past 50 years.

"The Forest Service has kept statistics on fire starts ... from the '40s to '50s until now," said Roher.

The map shows a random scatter of fires started by lightning — which accounts for about half of all fires. But the other half of the fires are caused by humans — and those starting points hug the roads.

"It is a solid string of dots along 87 and 260 of human starts. It stands out like a sore thumb," said Roher. "It really does show the transportation corridors. As such, as we could work on getting rid of those fuels next to the roads."

The Arizona Department of Transportation (ADOT) is already racing to mow and clear road shoulders, with the high-risk fire season looming in May.

"We started mowing down south like we always do," said an ADOT representative. "We've been doing a lot around the guard rails. We will go to the back side of Slate Creek."

Keeping the grass short next to the highways reduces the risk that sparks from a dragging chain or a casually tossed cigarette will start a brush fire. This year, the grasses are tall and dry.

But that's why ADOT also has a water tender truck available to rush to any highway brush fire they hear about.

"If we hear about a fire, we go with traffic control and water support. That's never going to change," said the ADOT staff member.

APS also has improved protection for its equipment out in the forest.

Wade Warden, supervisor of fire mitigation for APS, spoke about the fuel removal around their poles that create "an unintended firebreak," but APS has removed fuels for years.

Last year they found they needed to protect their poles and lines more effectively.

For months, the energy company has worked to create a feedback loop and battery back up for the more remote communities.

Now, APS has found a better way to protect the wooden poles out in the forest.

The power company must use wooden poles in many remote, rural areas, since workers can't easily climb steel poles or get into those locations with bucket cranes.

"In the rural areas, we have to be able to climb," he said.

APS now wraps the poles in "basically chicken wire with a coating." The coating expands when heated so "it doesn't allow oxygen to get in there so the fire can start," he said.

Each innovation helps reduce the risk of wildfires, but the tree and brush-choked forest remains. Only a combination of thinning projects and managed fires will tame the megafires.

"Most of the time, we have to do some initial fuel treatments to even get to where it can be managed by fire," said Roher.

The thinning projects make it possible to make use of managed fires, which the Forest Service can let burn longer with less chance of the fires escaping control. Eventually, that mosaic of managed fires can create buffer zones that prevent the community-destroying megafires.

The Forest Service has a five-year plan to continue to make fuel breaks around communities bigger each year. Over the past five or 10 years, the Forest Service has thinned more than 50,000 acres around most Rim Country communities. The Payson Ranger District also will partner with the state of Arizona on projects such as thinning Hardscrabble Mesa outside of Pine.

"And a future project is to work in the old Dude Fire Scar masticating [machine thinning] that," said Matt Piochek, the lead ranger of the Payson station.