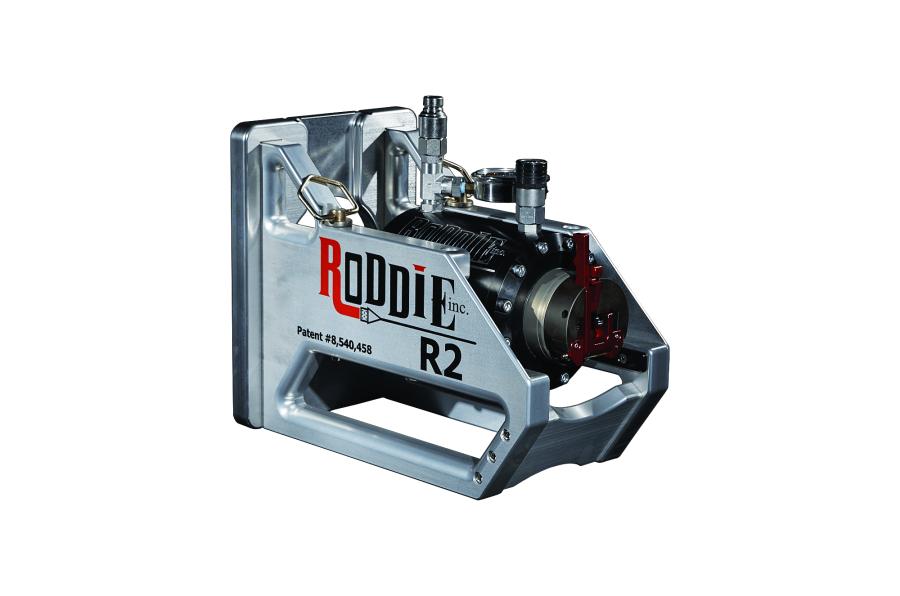 Inside Roddie Inc. last week, a crew was hard at work building a trenchless-pipe-replacement empire that is starting to span the globe.

Machines whirred and slivers of metal curled and flew as pieces of the company's flagship creations — the equipment that allows for underground pipe removal and replacement without having to dig up the ground above it — were manufactured.

Roddie's is still a relatively new technology, developed and created by Rod Herrick, whose decades of experience working in contracting led him to found the business and invent the equipment in the 1990s in California.

But it's also relatively simple in its process: A pump pushes a stainless steel pipe-bursting head on a cable through the old sewer or water line, rupturing it as the same cable drags the replacement pipe in place. At Roddie, they've developed several sizes of machines to handle any size of project, according to Adam Shappell, who handles sales and training for the company.

The traditional model is the R2, followed by the smaller Basement Buddy and the larger Pit Shot. All three models, along with other products such as power carts and hydro-control pieces, are built and shipped from the warehouse near Columbia Falls, in northwestern Montana, then sold to plumbing and construction businesses all over the country and the world.

Like most inventors, Herrick wanted his machines to work well, even if that meant changing some pieces or adding some parts. That's where his other business, Montana Trenchless, comes in. The company specializes in underground pipe replacement in the Flathead Valley.

“It's a perfect proving ground for us,” Herrick said. “There are so many sewer and water lines that are bad here, and they've been pent up because there was no technology other than traditional open-cut methods.”

Shappell said having Montana Trenchless as the de facto research and development department of Roddie Inc. has allowed the company to test its equipment in the field, then bring it back, talk about what worked and what didn't, then make changes.

For example, the Basement Buddy directional drill had some trouble when it ran into rocks. They needed something more powerful, and the Pit Shot was born.

Instead of a sales pitch, Shappell said he just has to talk to potential clients about his work.

“I'm telling them about what I do with this machine every day,” he said. “We try and build everything in-house.”

Shappell's brother, Jared Shappell, works as the designer and engineer, and can whip up plans for new parts or equipment. Jared Shappell believes there are about 1,000 to 1,500 parts that Roddie Inc. designs and manufactures in the shop, which, at 11,000 sq. ft., is starting to cramp the burgeoning business.

“It's always fun when you get to build something new,” he said.

Herrick said the company recently purchased 40 acres on Highway 40 near Columbia Falls to eventually build a new 30,000-sq.-ft. facility. The current building has already had two additions and is “bursting at the seams.”

While Roddie Inc. continues to churn out the product, Montana Trenchless is busy year-round, Herrick said, because they don't have to worry about battling the elements.

“We can put the drill in the basement and drill on out and do it all underneath that frozen ground,” Herrick said.

Most jobs, like sewer line replacements, are finished in a day or a day and a half, and usually sewer service is only disrupted for an hour. Roddie equipment is used in Newfoundland, Russia, Hawaii, and all over the contiguous United States. Recently, a Roddie machine was able to drill 600 horizontal ft. (183 m) for an underground project on lines underneath the Space Needle in Seattle instead of digging up ground and hampering the popular tourist attraction.

Both Adam Shappell and Herrick said they keep their phones on 24 hours a day, seven days a week, ready to assist and troubleshoot for their customers. This responsiveness has earned them praise, and it's what keeps the company developing new technology.

When it expands into its new space, Herrick said the business would likely add employees, including a potential night shift. He and Shappell said they are proud to work for a company that provides good-paying jobs to great employees.

“If there were 10 good guys in the Flathead, I got nine of them,” Herrick said of his crew.

Shappell said the made-in-Montana label is also a source of pride.

“We are from Montana,” he said. “I get to go out across the world and stand at somebody's door and say, 'There's our machine. Our boys put that together.'”

For more information about Roddie Inc. and Montana Trenchless, visit www.roddieunderground.com or www.montanatrenchless.com.