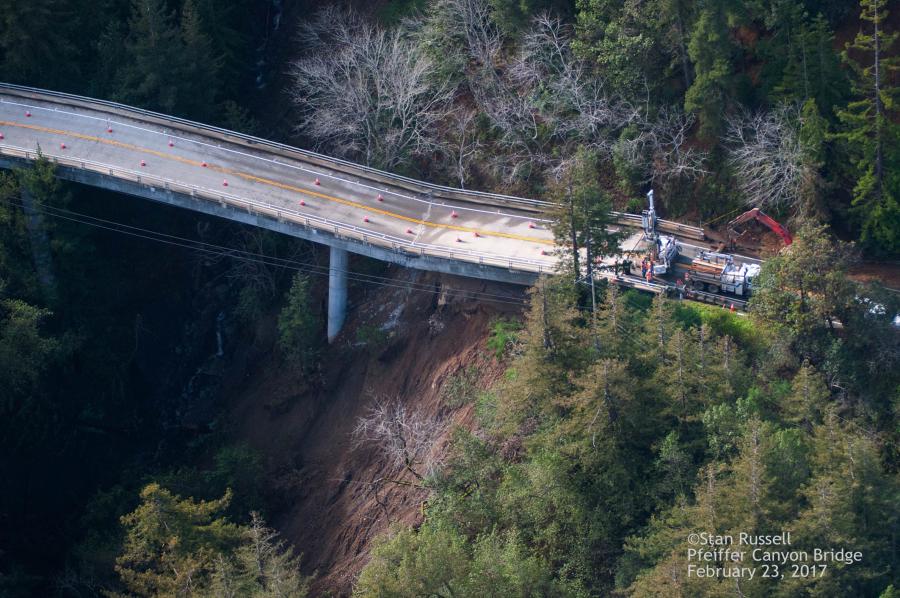 Stan Russell photo Crews are working to clear and repair multiple slide areas on Highway 1, but the most significant is the crumbling of the Pfeiffer Canyon Bridge, trapping residents south of the bridge in the central coast town in Monterey County.

The rains so desperately longed for in California have arrived, finally bringing relief from years of drought, but also ushering a new set of problems.

“Looking at the bright side, we're not in a drought, but it has a price, said Susana Cruz, spokeswoman of district five of the California Department of Transportation. “That is the irony. We have received so much water. The roots of trees are saturated. The hillside is saturated. Even though the rain has stopped, the slides haven't stopped. They can continue for 30 days in dry weather.”

Crews are working to clear and repair multiple slide areas on Highway 1, but the most significant is the crumbling of the Pfeiffer Canyon Bridge, trapping residents south of the bridge in the central coast town in Monterey County.

The bridge was built in 1967 and, as are all California bridges, inspected every two years.

“This has never happened before,” said Cruz. “The slope movement is what caused the fracture, multiple fractures, and the slide is still moving. The bridge is right in the heart of Big Sur. It was closed Feb. 15. It hasn't been brought down. It's closed because of all the movement, but it hasn't fully collapsed. We're just keeping everyone off of it. There is no access for pedestrians, no emergency responders or vehicles.”

Even as crews work to determine the magnitude and depth of the slide that is collapsing the bridge, CalTrans officials are already researching the appropriate replacement.

“The findings are going to be hopefully available on [March 17],” Cruz said. “We're checking the alternatives, trying to find the best bridge design depending on the slope and the slide to see what is needed. We're looking for the best fit. Hopefully, we will be able to build another one as expedited as possible. I'm not sure of a time frame.”

But Cruz did note that it could be finished in as little as a year.

The cracking of the 316-ft. (96 m) long bridge was first noticed by a caretaker of a nearby property. He'd previously built a footpath from the property into town. In mid-February, the caretaker noticed that the distance of his footpath to the bridge was growing larger and larger.

Once another slide south of town is repaired, locals will have access from town.

“We're working 24/7 and hope to finish that within two weeks,” Cruz said. “Once that clears, they will have access out of town, but it will be for locals. I don't think tourists will be able to access. In order to be able to go through, they will need higher profile vehicles to handle the road drop. Locals know the area, but tourists don't. We're trying to dissuade them from trying to access it and have their cars bottom out. There are just so many slides on Highway 1.”

Here are some of the other issues on the central coast as reported by CalTrans at press time:

• The northbound lanes of Highway 17 from Granite Creek Road in Santa Cruz County to Summit Road in Santa Clara County have re-opened. The southbound right lane of Hwy. 17 is closed near Sugarloaf Road due to cracks on the roadway and deterioration near the shoulder. Caltrans engineers are assessing this location.

• Hwy. 35, just south of Zayante Road is expected to re-open to (local traffic) with one-way reversing traffic control with stop signs following a roadway slip out. There will be a 4-ton maximum weight. There is one-way traffic control just north of the Summit Road/Bear Creek Road intersection with temporary guardrail.

• There is a full closure from just north of Black Road to Castle Rock Road due to a major washout. It is unknown when this section of highway will re-open.

• State Route 41 was closed due to a slide at near the Atascadero Creek Bridges. Motorists will encounter a closure at San Gabriel Road near Atascadero and Ironwood Drive near Morro Bay.—CEG