Nation's Tallest Dam About to Burst 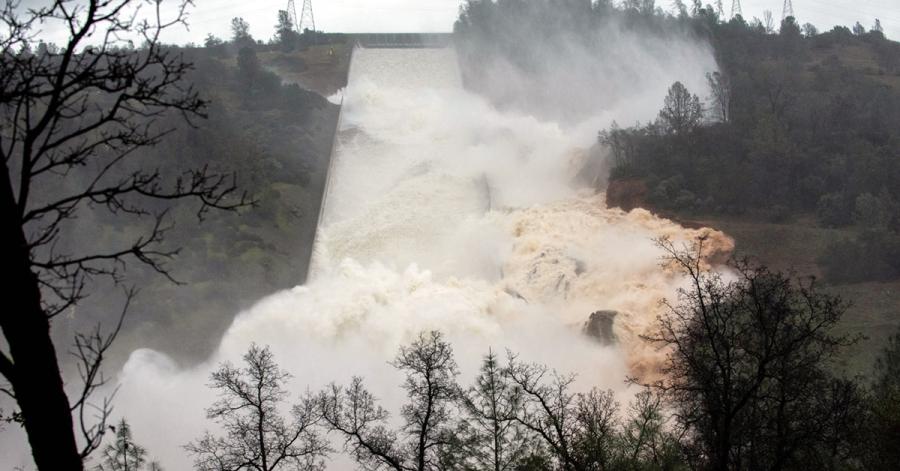 Capping days of tense planning at the nation's tallest dam, water flowed down an emergency spillway Saturday at Oroville Dam for the first time after the dam's main spillway suffered significant damage according to the Los Angeles Times.

Water started flowing down the spillway into the Feather River early Feb. 11th, with officials continuing to emphasize there was no imminent threat to the public or to the integrity of the dam.

The state Department of Water Resources said Lake Oroville — the linchpin of the state's water system that sends water from the Sierra Nevada south to cities and farms — was rising to the point where water would flow down the emergency spillway. At 8 a.m., the agency said the spillway was now in operation.

Eric See, a spokesman for the Department of Water Resources, said it was the first time the auxiliary spillway was used to drain water from the lake since the dam was finished in 1968.

"This is a very unusual event for us at Lake Oroville,” See said. “It's the first time the structure has ever been used to spill water."

"Relatively speaking, it's a small spill," See said, noting that the flow over the emergency spillway is expected to end in the next 38 to 56 hours.

"The lake will actually drop and the spill will cease," he said.

Officials said the flow of water into the Feather River is about half of the downstream flood capacity and consistent with releases made at the same time of year during previous wet years such as this.

Bill Croyle, acting director of the water department, reiterated that the flow is less than half of what the system is designed to handle.

"The dam is not threatened by these conditions,” Croyle said. “These kinds of flows are typical for this kind of runoff period.”

The agency is expecting a few dry days ahead before another storm hits later in the week, he said. The large snowpack means the agency will have to continuously monitor inflows into the lake.

"In this kind of situation, the next 60 to 90 days will be critical how we route this runoff into the Feather River," Croyle said.

"The flow rates that we see now pose no threat to the dam and no flood threat to downstream waters," Croyle said at a news conference at the state park headquarters in Oroville.

A gaping hole — some 250 feet long and 45 feet deep — appeared Feb. 7th in the lower part of the main spillway, a concrete channel that rests on dirt. The state shut down releases from the spillway for a time but then restarted them to counter inflows to the lake from the week's storms.

Workers with the California Department of Forestry and Fire Protection on February 10th used heavy equipment to clear trees and brush from the hillside route of the 1,700-foot-long emergency spillway.

Utility workers were preparing to move transmission poles out of the way. Booms and boats were brought in to collect debris and keep it from clogging the pool at the base of the dam and downstream diversion gates.

A team of hydrologists, meteorologists and engineers concluded that the “river channel can accommodate whatever we throw at it today and over the weekend,” said Doug Carlson, a water resources spokesman.

State engineers repeated that Oroville's earthen dam — a separate structure from the spillway — was not in any danger.

“The emergency spillway has not been used since the dam was finished in 1948, but DWR has anticipated and prepared for its use since Tuesday, when erosion opened a cavity on the concrete, gated spillway typically used in winter operations at Lake Oroville,” water officials said in a statement Feb 11th.

Since then, NPR reports that residents of the area some 70 miles north of Sacramento were placed under evacuation orders around 4:30 p.m. Feb. 12th, after the reservoir rose to a record level — more than a foot above what's considered "full" — and its main spillway struggled to provide relief and its auxiliary spillway was seen at risk of failing. At the time, officials said that dangerous flooding could be just hours away.

Even as the evacuation orders were issued, officials had reason to hope that Lake Oroville would soon begin to recede, due to a drop in the amount of runoff water entering the lake and a dry weather forecast. But the reservoir's infrastructure was struggling to cope.

"The lake is considered full at 901 feet [above sea level], and it's at that level that it began pouring over an emergency spillway early Saturday," KQED reports.

The lake kept rising, surpassing its "full" level by more than a foot. That night, Lake Oroville's water level finally dropped below 900 feet around midnight, in a trend that has continued into Monday morning.

This story will be updated as more information becomes available.

Update by Chris Megerian via latimes.com

The water level of Lake Oroville is dropping at a rate of roughly 3 to 4 inches per hour, according to officials.

According to a spokesman for the Department of Water Resources, water is pouring down the facility's damaged main spillway at a rate of about 100,000 cubic feet per second.

By 10 a.m., the lake's water level was 4 feet lower than the emergency spillway, which suffered damage during its first ever water release over the weekend.

Workers with the Department of Water Resources are scrambling to reduce the lake's overall water level to 50 feet below the emergency spillway elevation of 901 feet. That mission has taken on added urgency as heavy rains are expected later in the week. 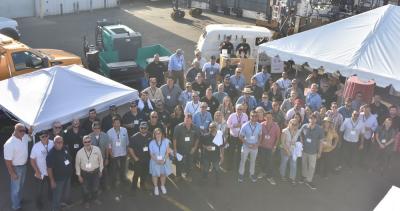