The National Trust for Historic Preservation placed the building on its 11 Most Endangered Historic Places list. 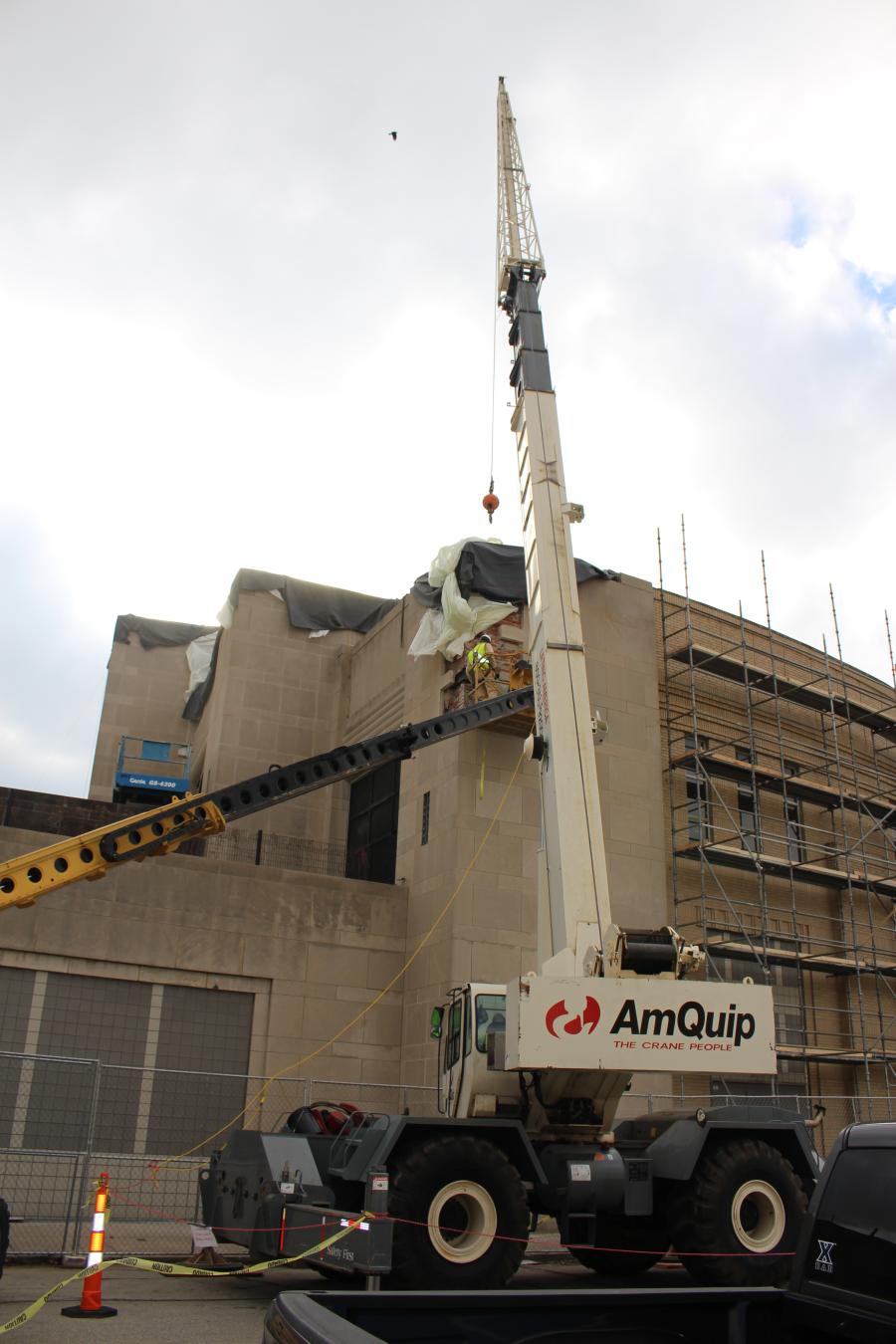 GBBN Architects is behind the design plan. Turner is serving as the construction manager and the general contractor, and is being supported by project consultants Ellington Management Services Inc. and John G. Waite Associates, Architects.

The Turner Construction Company (TCC) started the $212.7 million restoration and renovation of Cincinnati's historic Union Terminal in July 2016, the home of Cincinnati Museum Center (CMC). The project, which is receiving $175 million from a .25 percent sales tax increase over five years, is expected to be completed in October 2018.

GBBN Architects is behind the design plan. Turner is serving as the construction manager and the general contractor, and is being supported by project consultants Ellington Management Services Inc. and John G. Waite Associates, Architects.

The 500,000-sq. ft. (46,451 sq m) Art-Deco terminal, a national historic landmark that was built in 1933 and designed by Fellheimer & Wagner, has suffered from serious water damage that has led to major deterioration. The National Trust for Historic Preservation placed the building on its 11 Most Endangered Historic Places list. The work will focus on preserving the exterior and interior space, and making the museum more user-friendly for visitors. Crews are working to make the space environmentally sustainable via new electrical, plumbing and IT systems and providing more space for exhibits. This includes repairing the dome and marquee, repairing and cleaning the brick and stone exterior walls and restoring windows.

The building houses the Duke Energy Children's Museum, the Museum of Natural History & Science, The Cincinnati History Museum, the Cincinnati History Library and Archives, the Robert D. Lindner Family OMNIMAX Theater and additional exhibit space for visiting collections. There also is a research center for science and engineering. Several exhibits will be closed temporarily during the upgrade. Amtrak has been using the station as a terminal since 1991. In 2015 1.4 million people visited the building.

A temporary lobby has been installed and Amtrak is now using a temporary station on the north end of the structure. The rotunda is being used as an access point for the construction crews and their equipment.

"This is a 100-year fix and it's needed," said Elizabeth Pierce, the CMC's president and CEO. "The building has been a local and national icon for over eight decades and has left its mark in the hearts, memories and minds of millions of visitors. This restoration gives us the opportunity to protect the building for the future. By updating mechanical systems and renovating spaces inside the building, it will also give us an opportunity to expand and refresh many of our exhibits. When the building fully reopens we hope to have a model science and history center that is more interactive and offers a much more personalized experience for each guest. We hope that, in turn, increases visitation both locally and regionally and further boosts the city's incredible cultural offerings."

"It's being thoroughly cleaned and when all is done," he said, "it will be brighter and will let more light inside. We're removing the large air defusers on the ceiling that were added well after it was originally built. We want people to see the original splendor of the design, which is having what some called a chandelier but more closely resembles a very ornate Art Deco-style light placed back at the top of the ramp to the Cincinnati History Museum."

Between the summer of 2015 and last July when construction began, CMC and Turner were engaged in serious planning to identify the issues and establish a work schedule.

The first step was to secure the site and ensure the safety of all workers and visitors. This included placing fencing around the exterior of the building and protecting the larger pieces of the collection and exhibits that could not be removed. A temporary lobby was constructed in the Rotunda to allow visitor access while the building undergoes restoration, with scaffolding forming a framework for the lobby before walls and a ceiling are added. Limestone that is severely cracked or damaged will be removed and replaced with limestone of the same color and finish.

"Stair towers have helped crews access Union Terminal's various roof levels in preparation of limestone and masonry work, which began in September," he said. "The limestone work commenced on the wings of the building. Plywood barriers were also constructed to protect the historic metal railings in the Museum of Natural History & Science and Cincinnati History Museum. The former meeting space on the lower level is being converted to expand Westheimer Hall II, part of our special exhibits gallery. This will add extra square footage to our special exhibits gallery, which will allow us to continue to bring blockbuster exhibitions to the region."

A key milestone was reached last October with the replacement of the aging electrical switchboard with new, custom-built panels.

"The new panels measure 45 feet long, 9 feet tall and over 4 feet deep," said Hefner. "They carry 480 volts and 8000 amps, more than 40 times that of your typical household electrical panel. The electrical upgrade is the first critical step in updating aging electrical, mechanical and plumbing systems.

In December the process of removing the windows on the face of Union Terminal's half dome for extensive cleaning and repairs began.

"Each of the nearly 200 glass louver panels that ring the Museum of Natural History & Science and Cincinnati History Museum weighs 65 pounds apiece and is an inch thick," said Hefner. "That's over 13,000 pounds of louvers to be cleaned, repaired and replaced. The ice tanks that were formerly part of the building's air conditioning system have been removed from the south mechanical yard in the rear of the building. Outdated systems will continue to be removed from the mechanical yard before a new foundation is prepared for the installation of new systems."

The 2017 construction season will be a busy one, with a majority of the work in 2017 continuing the exterior masonry and steel repairs.

"The front fountain and plaza area will be carefully demolished after all historic fountain pieces have been removed," said Steve Swisher, Turner's senior project manager. "Once the fountain and plaza have been removed, the area underneath will be waterproofed in fall. Inside, the historic Scripps Howard Newsreel Theater will be restored and new elevator installation will begin. Ductwork installation and mechanical and plumbing upgrades will also take place throughout 2017. In 2018, the historic fountain and the surrounding plaza will be replaced and historic finishes restored, and the new elevator installation and finishes in office spaces and museum spaces will be completed, as will the final cleaning of the exterior limestone."

Concerning the plaza renovation, Hefner said, "in addition to waterproofing the areas below the fountain and plaza, which is critical, this also allows us to address damage to the fountain. Almost every photo of Union Terminal features the fountain in front of the building, so giving that a much-needed repair will make an impact on the overall look of the building and grounds, just as the original architects imagined, and which have been proven correct over the decades."

Swisher is fully aware of the unique challenges associated with restoring historic buildings and Turner is working with John G. Waite Associates, Architects (JWA), preservation architects based in New York, to consult on the project.

"They have worked with us on initial probes and analysis," said Swisher. "They continue to work alongside local crews. We feel that we have minimized the number of surprises that we'll encounter thanks to the extensive initial work on the project, but you can never rule out every unexpected challenge. The condition of original materials can be a limiting factor in how much we retain in some areas. In places where the original material is too damaged to retain, we are diligently replacing them with material that most closely matches the original.

"That includes, for example," he said, "limestone that not only matches the original in color, but also in pattern, namely the corduroy pattern found on the building. In other spaces, we are actually removing replacement material that has been added that is not true to the original. One notable example is the removal of over 6.5 linear miles of caulking between limestone joints, which we are replacing with mortar that matches the original in color.

Turner Construction was awarded the contract as construction manager in July 2015, which gave the company nearly a year to do planning, probes and analysis to prepare for the project.

"Prior to July 2015," said Swisher, "the Cincinnati Museum Center had spent nearly a year working with civic and business leaders to identify the full scope of the project before presenting it to voters on the November 2014 ballot. That preliminary work also helped us as we prepared to begin the project. Communicating with Cincinnati Museum Center and their stakeholders has been a critical focus of ours. The building and the Museum Center are a key part of Cincinnati's history and culture and the restoration projects impacts so many people across the region.

The Union Terminal is providing Turner several spaces to store and stage equipment.

"As many of the interior spaces have been cleared out to prepare for the project," said Swisher, "some materials are staged inside. Historic components of the building and some exterior masonry pieces are stored in an offsite facility nearby. Our Cincinnati offices are just a mile away from Union Terminal and project offices are housed in trailers on site."

Turner is still determining the amount of materials that it will be removing and bring in for the project.—CEG