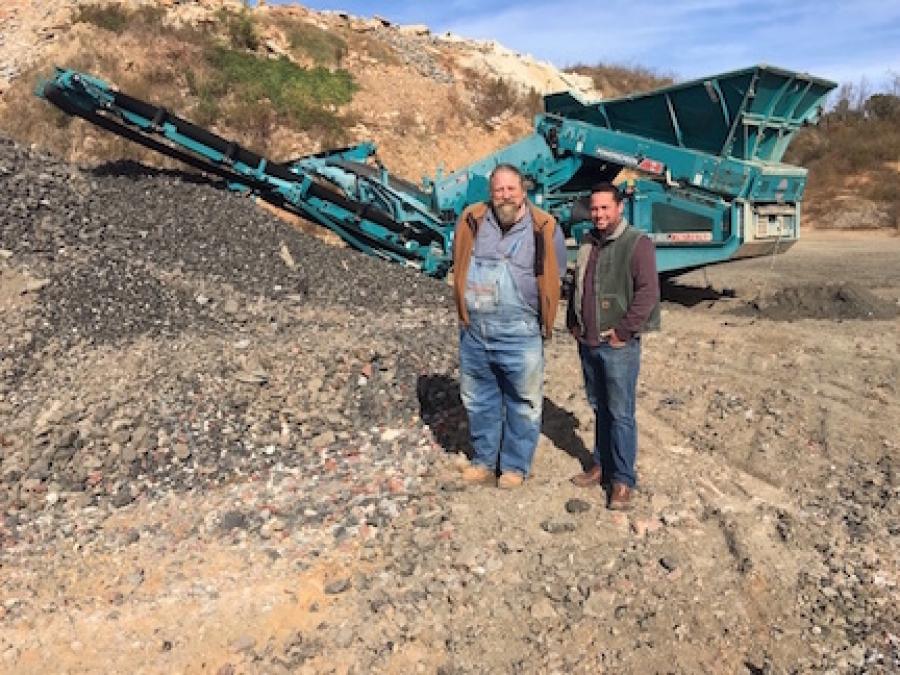 J. Westmoreland Inc. of Kernersville, N.C., proves the old axiom — there is more than one path to success — is accurate. The company was founded by James T. Westmoreland in 1967 as a septic tank company.

“My dad had a farm and a farm tractor with a backhoe and a loader mounted on it. He started digging on the farm and cleaning it up. Then, he started a septic tank business,” said Thomas R. Westmoreland, president of J. Westmoreland Inc. of Kernersville, N.C. “In 1987, I started running the business. Up until then, we were probably 90 to 95 percent septic tanks and five percent commercial grading.

“We started doing commercial grading about 22 years ago with a company that we are still working with today, Venture Construction. The company's major construction operation is located in its main office in Atlanta, Ga., but the company also has a satellite office in Greensboro.

“Larry Vickery, senior vice president of Venture Construction, was building a house at the time and asked me to do some work. At the time, he was on the board of Kernersville Methodist Church, and they had a building project coming up that required demolishing houses, so I did that. They gave my number to one of their project managers, John Raxter. His company was doing a Boston Market in Kernersville, with demolition and grading, and they showed me how to do commercial work.”

Today, the company maintains its diverse portfolio of services. It has recently performed demolition site grading, roof drainage, storm grading, curb and gutter installation as well as putting down stone and pavers for a number of clients. These clients include restaurants — Chick-Fil-A, Wendy's and Bojangles, McDonalds — as well as a doctor's office in Oak Ridge, tennis courts and baseball fields at Wake Forest University.

The company also maintains a landfill, which is a land clearing and inert debris (LCID) landfill. Westmoreland bought the property several years ago.

“When I bought this property, we did not use it as a landfill,” said Westmoreland. “Then, we started to open it up. We had people on the honor system until this past spring.”

The company accepts solid yard and waste debris, asphalt, untreated wood and dirt from the town of Kernersville and the city of Winston Salem, N.C.

“We crush it, and we sell it,” said Westmoreland. “We'll screen the dirt. I have six machines. All of them are Terex machines — jaw crusher, impact crusher, scalper screen and a deck screen. I also have a trommel screen and a conveyor. We do mobile crushing, too.

“For concrete, we use the scalping screen unit before the concrete goes into the crusher, which pulls out all the dirt and crushes the clean concrete. That way, we don't have a contaminated product.”

Westmoreland said that the construction and landfill divisions of his company complement each other.

“We did a couple jobs for friends of mine, crushing on site, which means they don't have to haul the material off. So, they are getting the benefit of not having to pay to haul it off. Some areas will charge $50 to $125 a load for concrete. So, if you are in an area where you have to pay to buy the fill, and you have concrete that you can use on site, it is often a cost savings to crush it on site and use it for the fill,” said Westmoreland.

“We also had a demolition job on a McDonald's in Greensboro. We crushed the building slab, the debris, the curbing gutter and the asphalt, and we used it to fill the hole back in. We didn't haul anything off.”

“Doggett Construction of Summerfield was the grading contractor. We won the demolition contract, and we crushed about 150,000 cubic feet of concrete, which took about three weeks. We used a Terex jaw crusher and two or three Cat excavators, a Caterpillar rubber tire loader and a Caterpillar track loader. We had a lot of steel separating in that facility.”

Today, Westmoreland continues to rely on his Terex equipment, as well as his Powerscreen Warrior 800 that he purchased from Powerscreen Mid-Atlantic, a dealership serving the Carolinas and the Virginias. He purchased it through a $40,000 North Carolina Department of Labor recycle grant.

“I didn't know anything about crushers, and I didn't want to buy a machine from a dealership that was 200 or 300 miles away. Powerscreen's maintenance facility is seven miles from here. They were onboard with any requests to help me. The guy working the yard had never been around a crusher when he came to work here a year-and-a-half ago, but they told me he did an excellent job operating the machine. They've been kind to lead us through it.

“Tom and I have become good friends over the years. We really pride ourselves on building relationships with our customers because it's not our goal to sell one machine and be done. We want people to feel comfortable with us, so if they need something else, they will come back, knowing they had a good experience with us, and that they have both a good product as well as a support team behind it. Tom's very forward thinking and he's is willing to take a shot and try different things. If he sees an application, he will call me up and say, 'what do you think about this?' 'Do you have a machine that can do this?' Nine times out of ten, I do, so we've had a really good working relationship.”

Powerscreen Mid-Atlantic carries a full line of Powerscreen equipment, but also represents Terex Washing Systems, a line of washing and rinsing equipment; Terex environmental equipment, which specializes in grinders and chippers; and Telestack, a material handling company, specializing in track and portable hopper feeders and loadout systems along with track conveyors.