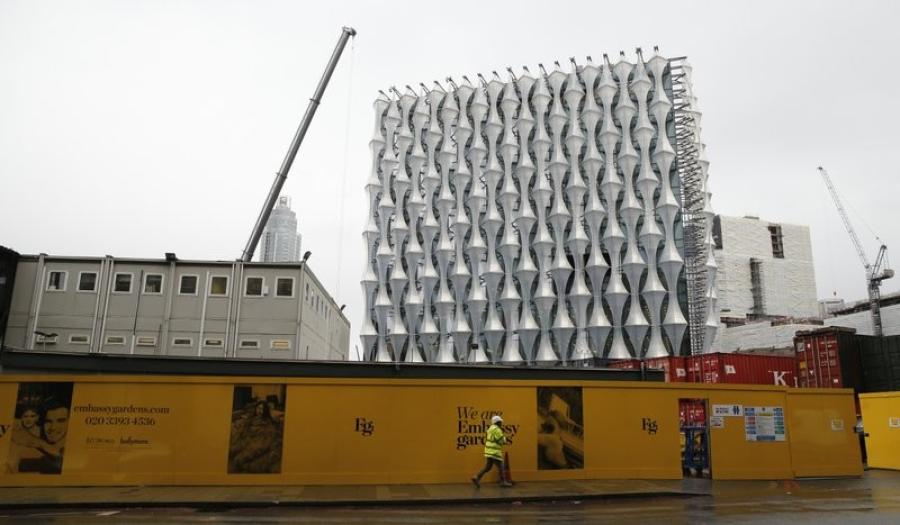 The new building, which replaces the former U.S. Embassy on Grosvenor Square in the heart of London, is playing a central role in the rejuvenation of the Nine Elms neighborhood, which has seen a spurt in housing and office development.

LONDON (AP) — The most surprising aspect of the pricey new U.S. Embassy in London is what isn't there: a perimeter fence.

There is no imposing security barrier to protect the highly visible embassy in a city that has this year been targeted repeatedly by extremists.

Instead there are some public gardens with benches on the edge of the property, then a pond to keep unauthorized people from approaching the new building south of the River Thames. Officials are quick to emphasize the pond is not a moat, it does not encircle the entire building.

U.S. Ambassador Robert “Woody” Johnson said Wednesday the $1 billion building that opens to the public on Jan. 16 is designed to be both welcoming and secure.

He said he hopes President Donald Trump will come to London for its official dedication, which may come weeks or longer after the embassy's first day of business.

“We are looking forward to welcoming the president when he comes over here,” Johnson told reporters during an advance look at the new facility in the Nine Elms neighborhood. “I think he will be very impressed with this building and the people who occupy it.”

He said the president's schedule is difficult and it's not clear when he will visit. Trump has accepted an invitation for a state visit to be hosted by Queen Elizabeth II, but no date has been set.

The ambassador touted the new embassy as a technological marvel, but his remarks were at times drowned out by feedback from a faulty microphone.

The new building, which replaces the former U.S. Embassy on Grosvenor Square in the heart of London, is playing a central role in the rejuvenation of the Nine Elms neighborhood, which has seen a spurt in housing and office development.

Officials say it would have been prohibitively expensive to renovate the Grosvenor Square embassy, which opened in 1960, and update it with modern security features.

The new building, with its distinctive cube shape, is nearly twice as large as the Grosvenor Square facility. It is the single most expensive embassy building ever built by the United States, Ambassador William Moser said, even though U.S. diplomatic compounds in Kabul, Afghanistan and Baghdad, Iraq cost more.

Moser, who supervises overseas building construction for the State Department, said the money for the site and its development was generated by selling other U.S. government properties in Britain.

“It was built with no taxpayer dollars,” he said.

The 12-story building offers a commanding view of the Thames and its design emphasizes sustainability, including the use of water runoff to form a waterfall.

A number of interior gardens emphasize American themes — one evokes the Grand Canyon, another is designed to look like Pacific forests — and the housing for U.S. Marines includes a landscaped outdoor seating area.

“It does so discretely rather than overtly,” he said.