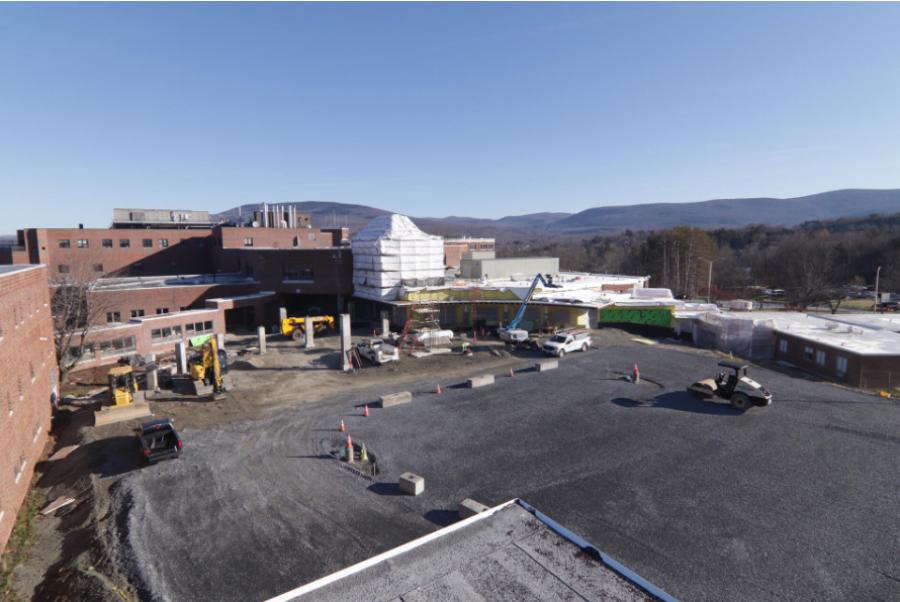 In mid-November, patients visiting the Southwestern Vermont Medical Center (SVMC) in Bennington who had previously used the connector between the hospital and its Medical Office Building were re-routed to a canopy for all the facility's entrances and exits.

The detour is a necessary part of a significant $25 million renovation and expansion of SVMC's main entrance and Emergency Department (ED). Hospital officials expect the connector to remain closed until May 2023.

"Very few patients who have two appointments — one each in the hospital and medical office building — sequentially on the same day, rely on this route," said Pamela Duchene, chief nursing officer and vice president of Patient Care Services. "We are asking them to please use the canopy entrance for hospital appointments during the construction and appreciate their patience with this important project."

The temporary canopy entrance can be accessed using the second right turn for folks entering the hospital campus from Dewey Street. It is the preferred entrance for people using not only the ED, but reaching various laboratories, and imaging, surgical, endoscopy and sleep studies facilities, as well as to visit inpatient rooms.

Operated by Southwestern Vermont Health Care, the Bennington hospital is modernizing its emergency department and hospital main entrance to address overcrowding, operational flow and wayfinding on its campus. Besides expanding the SVMC complex, the effort will include parking and access road improvements.

The extended emergency department will have 18 treatment spaces, an increase of two from the current 16 rooms, and expanding SVMC's mental health crisis care area will add five treatment spaces.

Outside the emergency department in Bennington, the project includes renovations of the main entrance to SVMC, as well as the outpatient registration area, the imaging department waiting area and upgrades to the phlebotomy and laboratory spaces.

An alternate construction ramp will be available to staff, who also will be able to aid patients experiencing an emergency that requires more direct access to the ED.

The renovation and expansion project at SVMC is to be complete and have its grand opening in early 2024, officials said.

Southwestern Vermont Health Care (SVHC) provides care to the communities that make up Bennington and Windham counties of Vermont, as well as eastern Rensselaer and Washington counties in New York, and northern Berkshire County in Massachusetts. The Bennington medical center is one of 25 primary and specialty care practices with the SVHC system.