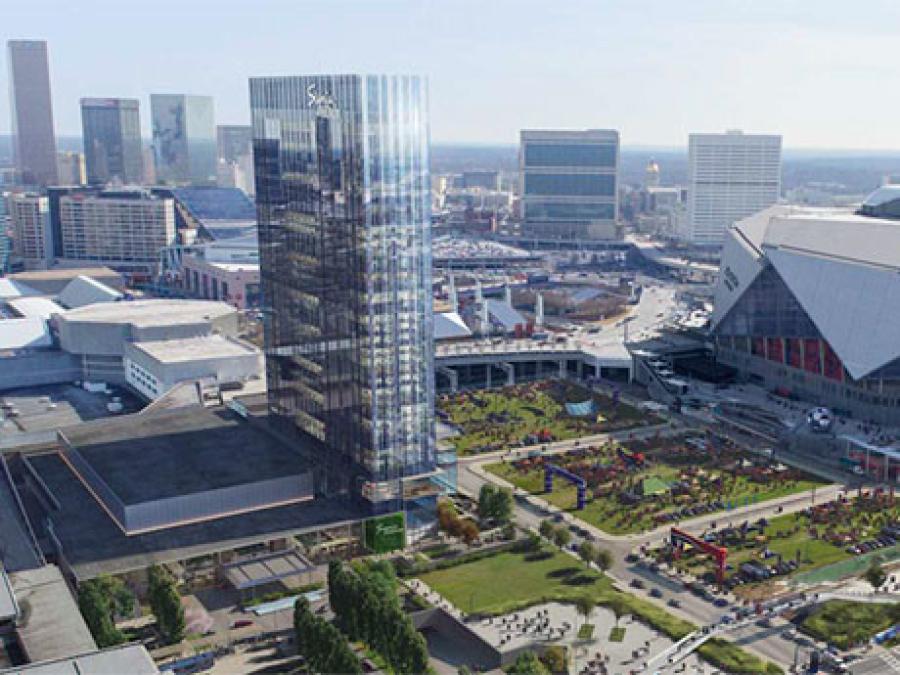 The new Signia by Hilton hotel will be connected to the Georgia World Congress Center via a walkway and will overlook the Mercedes-Benz Stadium in Atlanta.

The 40-story, 1.2 million-sq. ft. hotel will be the first new project under Hilton's upscale Signia banner and is set to become a headquarters hotel for the GWCC. The hotel will overlook Mercedes-Benz Stadium, home of the NFL's Atlanta Falcons, and also is near the Omni Atlanta Hotel, CNN Center, State Farm Arena and the Georgia Aquarium.

A total of 975 guest rooms will make up the Signia by Hilton, along with 75,000 sq. ft. of meeting and event space, a spa, fitness center, 6,670-sq.-ft. pool deck, an outdoor event lawn, a market, two chef-driven restaurants, three bars and a connected walkway to the GWCC.

The construction and development of the hotel, which Cannon said would generate approximately 600 building jobs, is scheduled for completion in early 2024, according to the news-gathering source.

Of the GWCC Authority's $308 million contract, $271 million was awarded to the Skanska/GC Contracting joint venture.

In 2019, the GWCC held more than 580 events and hosted 4.1 million visitors. The center also expanded in early 2020 with the opening of Exhibit Hall BC, a 100,000-sq.-ft. addition by the GWCC Authority allowing for more than one million square feet of contiguous exhibition space within the center.