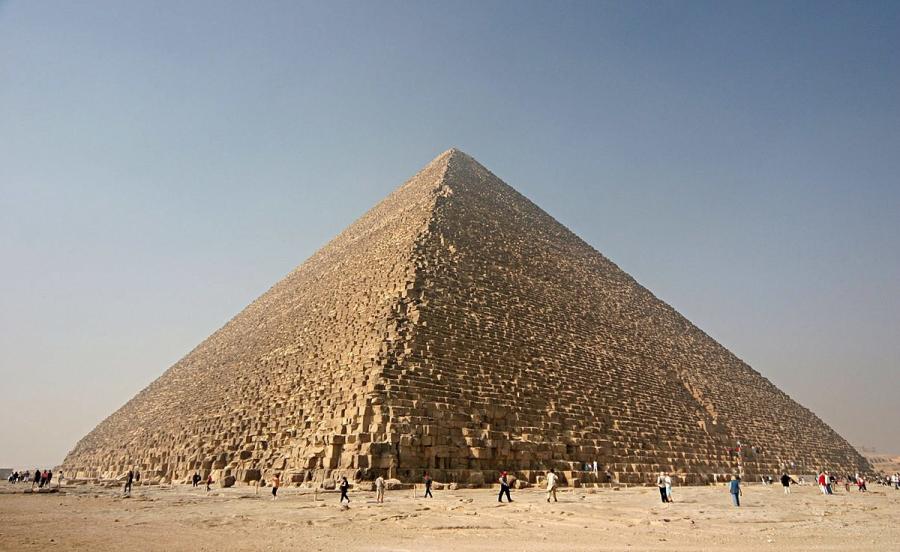 Forty-five hundred years after it was built, archaeologists have discovered proof showing how ancient Egyptians moved stone to construct the Great Pyramid of Giza in Egypt.


Forty-five hundred years after it was built, archaeologists have discovered proof showing how ancient Egyptians moved stone to construct the Great Pyramid of Giza in Egypt.

To build Pharaoh Khufu's 481-ft.-tall pyramid around 2,600 B.C., Egyptians had to transport 2.5-ton blocks of limestone and granite up to 500 miles to the site. How they did it has been a mystery, but a recently-discovered ancient papyrus scroll, ceremonial boat and waterworks system has revealed a complicated infrastructure that workers used in the absence of modern-day earthmoving equipment, the New Zealand Herald reported.

Found in Wadi Al-Jarf, an Egyptian port on the Red Sea coast, the scroll provides new information about how ancient crews used boats to help them move the massive stones. It was written by Merer, an overseer heading a 40-man crew, and is the only known firsthand account to how the pyramid was built. In his writing, Merer talks about the process of shipping limestone casing stones downstream from Tura to Giza. He also mentions that his crew helped to open large dykes, diverting water from the Nile to the site's location via man-made canals, the New Zealand Herald reported.

While the granite of the Great Pyramid's internal chambers was cut in Aswan, an area 533 miles south of Giza, the limestone casing stones from Tura only had to travel eight miles. For years, archaeologists have been unable to agree on how the Egyptians would have moved the stones, the New Zealand Herald reported.

“We've outlined the central canal basin which we think was the primary delivery area to the foot of the Giza plateau,” said Lehner.

Another team of archaeologists recently found an ancient ceremonial boat that was created for Khufu to use in the afterlife, shedding some light on how boats were built at the time. Using a 3D laser and careful restoration, the team learned that the boat was made by sewing wooden planks together with looped rope, the New Zealand Herald reported.