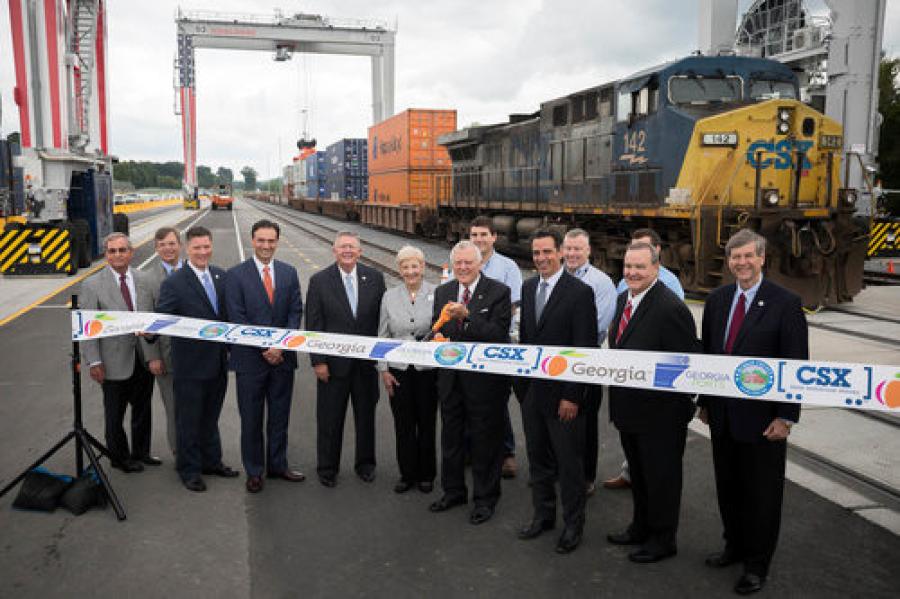 The completion of the rail port was celebrated on Aug. 29. (Appalachian Regional Port photo)

A new inland port terminal that moves cargo by train from northern Georgia to the busy coastal seaport in Savannah is generating new economic interest in an area better known for nature tourism than industry.

Gov. Nathan Deal and other dignitaries celebrated the completion of the rail port, Aug. 29, where trains began hauling shipping containers along more than 380 mi. of tracks linking the inland terminal to the Port of Savannah.

The investment is similar to two inland cargo hubs that rival S.C. State Ports Authority has built in the Upstate and Pee Dee region to provide those areas with a rail-served link to and from the Port of Charleston.

Georgia's Murray County isn't used to high-profile ribbon cuttings. The county is located along the southern edge of the Appalachian Mountains, and one-third of its land area is federally protected forestland. Lakes and state parks attract a healthy tourism business.

“I'm working on three closings right now, literally all three at the same time,” said Copeland, adding that six other prospects put off making decisions until after the terminal opened. “I don't think we've ever seen this kind of activity in Murray County in such a short period of time.”

The direct railroad connection gives shippers an alternative to moving cargo by truck through Atlanta. The terminal should reduce truck traffic by 25,000 round trips in its first year, and reach 50,000 round trips within five years, said Griff Lynch, executive director of the Georgia Ports Authority.

Lynch said his agency wanted inland customers near the Georgia-Tennessee line to feel like they are “at our back doorstep.”

“It's a fairly long truck drive at six, seven hours or more, so we said how can we make it easier to do business with the Georgia ports?” Lynch said. “This opens up a new door and we're seeing a lot of interest as a result.”

The rail terminal has a healthy industrial base nearby, from carpet and flooring manufacturers in Dalton to poultry producers and chemical plants. Volkswagen makes cars just across the state line in Chattanooga, Tenn., about 40 mi. to the northwest. Lynch said the rail port could see business from automakers in Alabama as well.

Companies already planning to use the rail terminal, according to a news release, include Mohawk Flooring of Calhoun and Thompson Appalachian Hardwoods, a lumber company based in Huntland, Tenn.

While the Georgia Ports Authority will operate the rail terminal, Murray County taxpayers and railroad company CSX Transportation shared in the cost. Murray County officials put up $700,000 to buy farmland for the terminal site a few miles from Interstate 75. And CSX paid for laying new track to connect the terminal to its network.

The port authority hired 11 workers to staff the rail terminal, which operates three electric cranes to move cargo containers. Lynch said all of them were hired from the Murray County area and spent several months training in Savannah.

The state has one other inland rail terminal located in Cordele in southwest Georgia, that's run by a private company. And Lynch said port officials are looking for a site to build another in northeast Georgia.