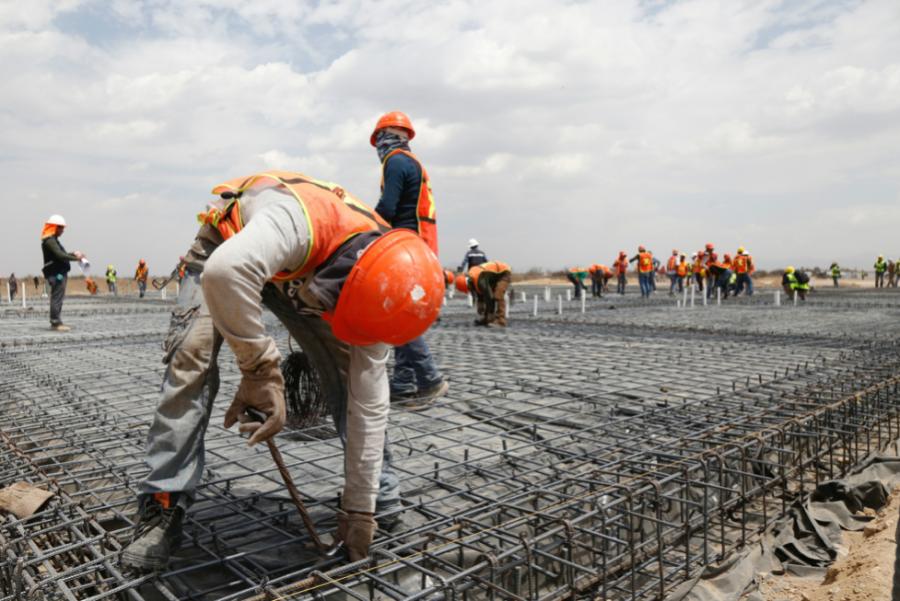 With work under way on a Facebook data center in Los Lunas, a major rapid transit project in Albuquerque and hospitals and roads in Santa Fe, New Mexico's construction industry is off to one of its best starts in years.

The number of construction jobs statewide in March hit 46,000 — the highest since the middle of 2009. The jump from February employment represents an increase of 3.4 percent, the best gain in the United States, according to the U.S. Bureau of Labor Statistics.

That's nowhere near the peak for the state, which saw 60,000 industry jobs just before the recession in 2007-08, but March numbers are higher than the past few summers and the best in 90 months.

With the state budget facing spending cuts, it's too early to tell whether the trend will be enough to offset shortfalls in areas such as retail or manufacturing, but preliminary data show construction is helping the city of Santa Fe's bottom line. Construction-related payments from the gross receipts tax are up 11 percent in fiscal year 2017 compared with the same period in 2016 — that's a boost of $780,000.

In the village of Los Lunas, construction is well under way on the new data storage center for Facebook. The work so far is dirt moving, trenching and utility extensions, but this summer the first building of a million square feet will start to take shape, said Ralph Mims, director of economic development of the village.

Over the next several years, the site will see anywhere from 200 to 1,000 construction workers a day. “If they go ahead and do all six buildings, we're looking at nine years of construction,' Mims said.

In Santa Fe, the city is seeing ongoing work at the new Presbyterian Healthcare medical center in Las Soleras as well as an expansion of Christus St. Vincent Regional Medical Center.

Both sites have large cranes, something not seen in Santa Fe since completion of the New Mexico Rail Runner tunnel.

Another high-profile project is a retirement center. Houston-based PinPoint Commercial is building The Legacy at Santa Fe with a total of 84 units offering a mix of limited assistance, traditional assisted living and memory care.

The facility also will house a restaurant, a movie theater, a general store, a gym and a library. The company has other facilities in Texas, Florida and Georgia.

Another retirement complex was set to break ground this spring. The Place at Caja del Rio has been given full development approval by county commissioners with plans to complete it in phases over five years.

The initial phase will open in 2021 and, when completed, will have 180 units for independent living, 200 for assisted living, 120 skilled nursing beds and 80 units for memory care, according to information on file with Santa Fe County. The project is being developed by Cauwels & Stuve Construction of Albuquerque.

Closer to downtown, Vital Consulting Group is installing concrete beams and approach slabs for the new underpass of the city's Acequia Trail. The entire project is expected to be complete by the end of September and has its own Facebook page — AcequiaTrailUnderpass.

The city also has started work replacing the narrow DeFouri Street bridge over the Santa Fe River. The $500,000 project will replace the span between West Alameda and Alto streets that was built in the late 1930s and reconstructed in 1959.

That work continues through the summer and will require some traffic detours around the work zone just west of downtown.

Homebuilding also is picking up in Santa Fe, said Kim Shanahan of the Santa Fe Area Home Builders Association. He said a project by the Pulte Group in Las Soleras is advancing quickly and will eventually have 300 homes. Pulte also recently purchased a tract of land for higher-end, single-family homes in Las Campanas, according to Shanahan.

Twilight Homes and Palo Duro are building new homes in Cielo Azul. Also on the south side, the Santa Fe Housing Trust and Homewise have more affordable projects moving forward.

“We signed up 15 homes yesterday for the Parade of Homes,' Shanahan said of the annual new-home tour in which builders highlight their inventory. He expects if building continues at the current pace, the home tour will be bigger than last year.

In Albuquerque, the city's newest hotel opens next week in Old Town. The Hotel Chaco by Heritage Hotels is 118 rooms and five stories with a price tag of $40 million.

Albuquerque also is in the middle of a bus and mass transit redevelopment project known as ART — Albuquerque Rapid Transit. The $120 million project, a headache for drivers and businesses, will include new buses, but construction spending alone is $86 million, said Joanie Griffin, project spokeswoman.

“At any given time, there are 350 workers' on the project, she said. Many live in Albuquerque and can now work without having to travel, she added.

“Everything is local except for the buses. Obviously, we don't have bus manufacturers here.' —CEG