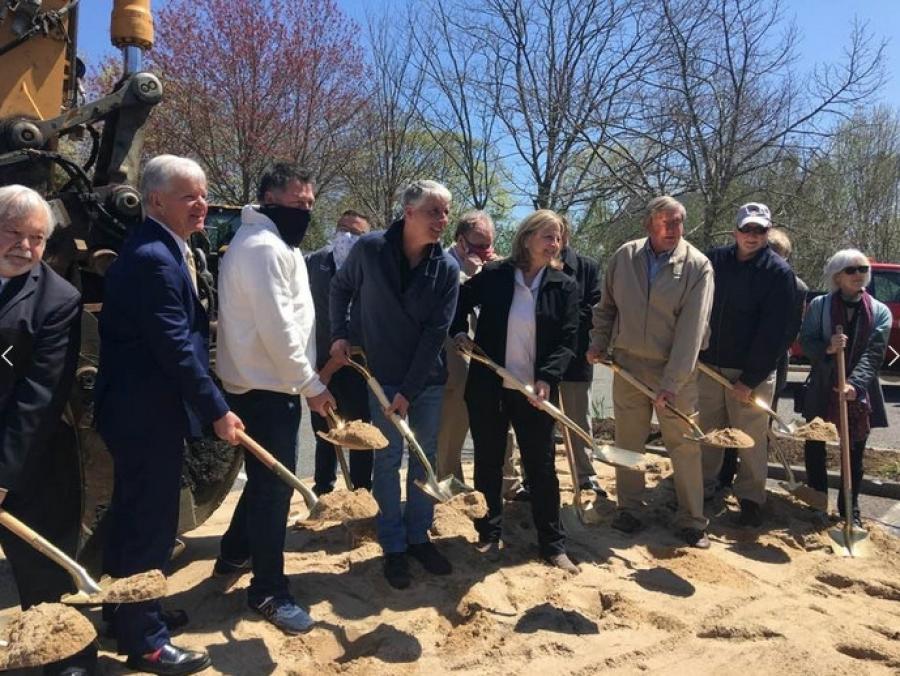 After more than six years of planning, engineering, and negotiation, a ceremony was held to mark the commencement of construction on a sewer project in the village that's been a far-off dream for years. (Village of Westhampton Beach photo)

Following years of planning, a groundbreaking was held April 23 in Westhampton Beach, N.Y., to kick off the construction of a new sewer project designed primarily for environmental protection in the resort community, but also to boost more dining and apartments in the village.

Town officials spent six years on the effort, which also included input from engineers and negotiations with state and local concerns to secure the support and funding needed to bring the project to fruition.

Westhampton Beach leaders had long regarded the sewer project as a far-off dream, according to Patch Media.

"What a great way to celebrate Earth Day week," Mayor Maria Moore said at the groundbreaking. "We are one step closer to improving the quality of our waterways and protecting the environment."

As a result of working collaboratively with Suffolk County, the village will be able to connect its collection and conveyance system to the county's wastewater treatment plant, located at nearby Frances S. Gabreski Airport. By doing so, Moore added that Westhampton Beach furthers New York's goal of building shared services.

"This necessary infrastructure project will eliminate 5,000 pounds of nitrogen each year from our bay, representing a 24 percent reduction," Moore noted, according to Patch Media. "Having the sewer system in place will also alleviate some of the restrictions on our downtown, allowing for occupancy of apartments above our Main Street and expanded dining opportunities."

She said that with an expected completion date of September 2022, village roads will likely not be closed, only narrowed, during construction, allowing two-way traffic to continue.

The cost to build the collection and conveyance system is $11.1 million, Moore said, while the estimated cost to construct the modifications at the county's wastewater treatment plant at the airport is $4.4 million.

As of April 23, Westhampton Beach had been awarded grants from the DEC for $5 million, from the EFC for $1.8 million and from Southampton's CPF for $4 million.

The town contracted with Farmingdale's Novelli Contracting and Hinck Electrical Contractor in Bohemia, N.Y., for the building of the collection and conveyance system. Melville, N.Y.-based H2M Architects + Engineers designed the system and guided Westhampton Beach through the process, Moore said.

The planned sewer system is just another step in the village's efforts to upgrade its infrastructure, according to Patch Media.

"With all the environmental improvement features incorporated into our recently completed Main Street Reconstruction Project, including new drainage, hydrodynamic separators, permeable pavers and LED lighting, we've made great progress in protecting the quality of our environment and ensuring the economic vitality of our Main Street," Moore explained.

She cited a 2017 study by Christopher J. Gobler, of Stony Brook University's School of Marine and Atmospheric Sciences, that the new sewer system would mean a reduction of 5,000 pounds of nitrogen from Moniebogue Bay.

Kevin McAllister, founder and president of Defend H20 and a longtime project advocate, said, "Nitrogen pollution from antiquated septic systems is a serious and mounting threat to coastal water quality. Downtown Westhampton Beach, with its proximity to the bay, and where cesspools are immersed in rising groundwater, is a direct and significant pollution source to Moniebogue Bay. Recognizing what it would mean for both water quality and community lifestyle, I've been a vocal supporter of a downtown sewer district. Congratulations to the village and Suffolk County officials for making this happen."