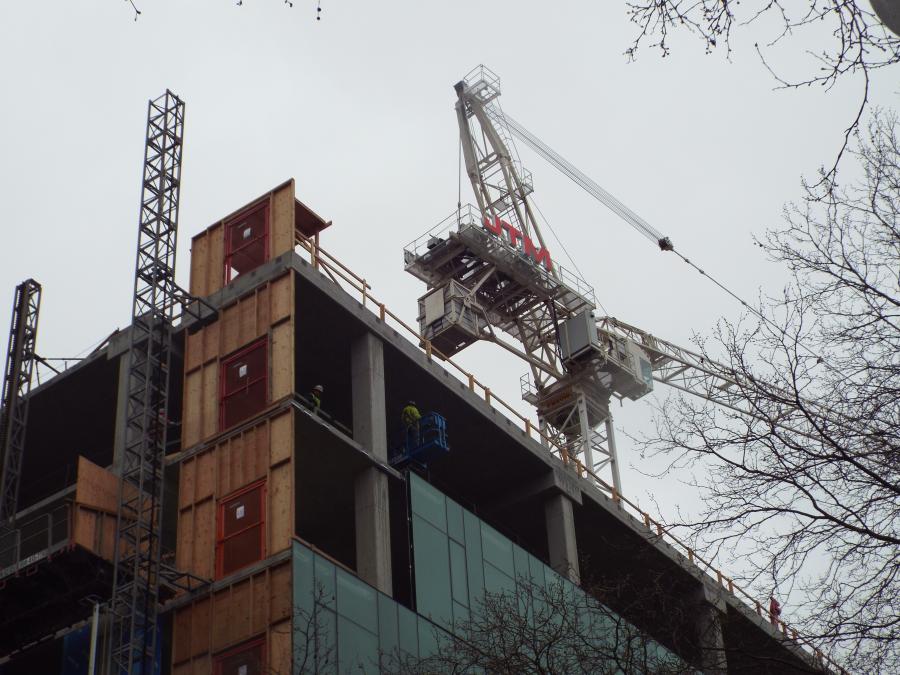 Andrea Watts photo Pioneer Square is a historic neighborhood currently undergoing a revitalization due to an influx of people and businesses moving to Seattle.

Weyerhaeuser will become downtown Seattle's newest tenant when the company moves into its brand-new corporate headquarters in the coming months. This eight-story building is billed by Urban Visions, the Seattle-based real estate development firm responsible for the project, as “a keystone project for Pioneer Square.” Pioneer Square is a historic neighborhood currently undergoing a revitalization due to an influx of people and businesses moving to Seattle. For Greg Smith, president of Urban Visions, this building is a culmination of nearly 15 years of patience and envisioning the potential of the surface parking lot at 200 Occidental.

“It was my dad's vision, for nearly 15 years, to have a high-performance building in the heart of downtown Pioneer Square that was a blend of old and new,” said Broderick Smith, vice president of Urban Visions. When his father proposed his vision in 2001, there was enthusiasm for the project, yet no momentum. It wasn't until 2007 when the project received new attention, and this time also the momentum to construct it.

“The building was originally going to be combined with a maintenance facility for the Seattle streetcar, as well as some housing and office in it,” said Bill LaPatra, project director at Mithun's Seattle office. Mithun is an architecture firm that specializes in sustainable design, and they were awarded the commission to design the building.

Yet combining all these multiples uses into one building proved too unwieldy, and when King County Metro, which oversees the streetcar, reassessed its route, the project went quiet again — and stayed quiet for more than five years because of the recession.

In 2013, with the office market rebounding in Seattle, especially in Lake Union because of Amazon's growth, “Urban Visions had a vision that Pioneer Square is the next place to have both a repurposing of buildings and infill of existing empty sites with new projects to bring more activity to Pioneer Square,” LaPatra said. And that vision involved building 200 Occidental.

Once again Mithun competed for the project and was awarded the commission. LaPatra said that in this iteration, the building was much simpler because it was dedicated to only office. The final design, he said, also had “a deep green agenda; with an agenda to really be a capstone project on Pioneer Square, and a catalytic project for Occidental Park, filling in that site that had been empty for 60 years.”

Approval of the final building design went through the Pioneer Square Preservation Board. Although other developers might see this extra layer of approval as a project delay, Smith said that “it ultimately helped us design a better building,” and with Urban Visions having worked with the Board on earlier projects, “it gives us a competitive advantage as a firm, as we focus on downtown and know the process well.”

“We had a lot of discussion [with the Board] about expression of brick and its level of detail; how the coloration of the glass and the reflectivity of the glass complement the park; and from the metal detailing to lighting the exterior. There was some ideas about colored lights or no colored lights,” LaPatra said.

Lana Lisitsa, Mithun's project manager, estimates that they had at least eight to nine meetings with the board, and she said that one of the tools that Mithun's team used to help the Board visualize the future building was Lumion 3D, architectural visualization software. “The program allowed us to fly through dynamically, right in the meeting, around the building,” Lisitsa said. “The board was really appreciative of that because it helped them to see the future product.”

Of the final design, which includes street-level retail wrapped around all-street facades that extend into the alley corners and seven floors totaling 158,000 sq. ft. (14,678.68 sq m) of office space, Smith said, “we wanted something that's timeless, we wanted something that was respectful of the neighborhood, and you can see that in the design of the building. There's brick on three sides with big, nice open windows. On the fourth side there is a curtain wall; at first one wouldn't think [it would fit in] within the context of the neighborhood, but once you see it in place, it's really the fourth dimension of the park.”

Seattle-based JTM Construction is the contractor. Although Urban Visions hadn't worked with the firm before, Smith contracted with the company based upon feedback that he heard from the local community and another developer who contracted JTM on a neighboring Pioneer Square project.

“They've been doing a good job, and they're on track,” Lisitsa said. “They have come up with some great ideas for working with the aggressive schedule that the client has. They've been prefabricating certain components, such as exterior panels behind brick cladding, and are using unitized curtain walls to make erection faster.” The building structure is nearing completion and then it's on to the building's skin and interiors. Nearly 75 workers, spread across 18 different crews, are on site during any given day. Lisitsa reported that approximately 32,000 tons (29,029 t) of concrete is being used in the building and foundation, along with a little more than 3,000 tons (2,721 t) of reinforcing steel. Approximately 275 tons (249 t) of structural steel is being used for the entire building.

With there being little laydown area, prefabricating certain portions of the project reduces the storage on site.

“I think JTM should be applauded for not only doing a compressed schedule but also doing it at a tighter site,” LaPatra said. They also had to do crane work without the benefit of the swing arm because of the nearby trees and buildings.

Inside the building, LaPatra said they are using Weyerhaeuser products extensively in the building, in the flooring, ceiling and cladding. And with Urban Visions' having sustainability as a priority, the building incorporates elements that make it eligible for LEED Platinum Certification, such as an efficient HVAC system; a green roof strategy to capture water from the roof; and use of local building materials. Creating a healthy work setting was also a priority, and Lisitsa added that there are three sets of communicating stairs; reduced amount of interior finish materials; and when finish is being used, it is either no or low VOC.

One design feature that Smith is particularly proud of, and which sets Urban Visions apart from other developers in his opinion, is their decision to build an eight-story building instead of a nine-story building — forsaking 26,000 sq. ft. (2,415.47 sq m) for the benefit of having higher ceiling heights 13 ft. 6 in. (4.1 m) floor to floor resulting in approximately 12 ft. 10 in. (3.9 m) ceilings which allows more natural light into the building. Our decision creates a jewel box in a commodity market, he said.

The grand opening of the building is scheduled for late summer, and the team is looking forward to the building fulfilling its promise.

“I think this is an amazing opportunity,” Lisitsa said. “I really love Pioneer Square, as most of us do in Seattle, and there is such a tremendous reinvention of that place and Occidental Park.”

“The neighborhood itself is going through a wonderful transformation, thanks in part to a lot of things: more residents moving in, more focus from the city for investment in the area, investment in Occidental Park,” Smith said. “Our building is just part of the story. Our prediction is it will be one of the most famous destinations in the city.”