Next Phase of Providence, R.I., School Construction to Begin With Demolition 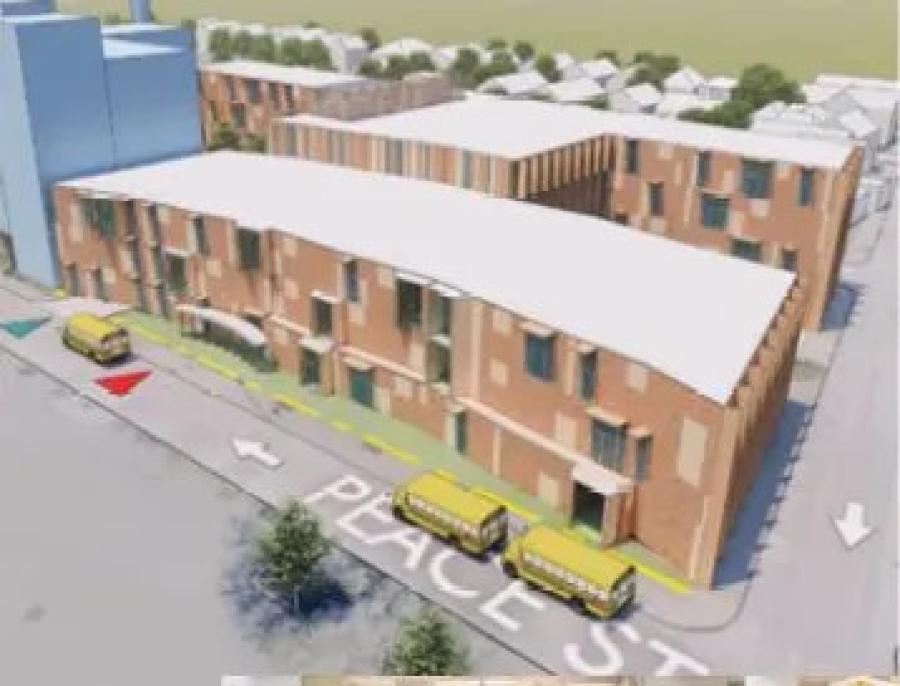 A PPSD rendering of the future elementary and middle school buildings on Peace Street.

A Providence, R.I., television station has learned that portions of the former St. Joseph's Hospital being donated to the city will be demolished to build a brand-new school in its place.

It is the latest in a series of construction projects in Providence to replace its often-decrepit public education buildings and infrastructure.

Originally, the city and the school system were to spend $75 million to renovate the shuttered eight-story hospital, which has been vacant for years. But the state-run school district and Providence — which still controls the city's physical school buildings — determined it was more cost effective to knock it down and build from scratch, Theresa Agonia, a spokesperson of Rhode Island's capital city, told WPRI 12 News.

The cost to build the dual-language school at 21 Peace St. in South Providence is now pegged at $85 million. But the news outlet reported Feb. 23 that engineers contracted by the district in recent weeks determined the cost to renovate the existing hospital buildings would be $91 million, higher than original estimates.

Plans call for the new school to serve 900 students in grades pre-K through 8th grade. It was one of five projects submitted earlier in February in a 2,500-page application to the Rhode Island Department of Education (RIDE).

The school construction is being funded in part using a $140 million bond approved by Providence voters in 2020.

Engineers who inspected the Peace Street property reported the hospital to be structurally sound, but a "concrete encased steel framing system" within would make it difficult and expensive to demolish parts of the interior — a necessary step to reconfigure hospital rooms into larger classrooms.

A date has not been set for when the former hospital will be razed, and the city does not actually own the donated buildings yet.

Real estate developer Joe Paolino — the former mayor of Providence who bought the vacant hospital in 2016 — signed a donation agreement in August 2020 to give the city the East building, the chapel and some land for a parking lot and recreation area. In exchange, WPRI 12 News noted, the city agreed to drop a dispute with Paolino over taxes owed on the property that became the subject of a court complaint.

He is retaining ownership of some sections of the hospital campus, including the West building which currently is home to an urgent care center. Paolino is interested in turning that building into a charter school in the future.

The new Peace Street school is currently scheduled to be finished in time for South Providence students to attend in the fall of 2025.

The construction of a brand-new school where the hospital currently stands is part of the next phase of Providence's school construction plan, known as Stage II, which is expected to be approved by the state Council on Elementary and Secondary Education in May.

Several school buildings in Providence — some of which were built in the early 1900s — have long been in disrepair. When the state took over the district in late 2019, RI Education Commissioner Angélica Infante-Green said some schools would get repairs while other buildings might close to make way for new construction.

"I grew up attending crumbling school buildings in Providence," acting Providence Public School Superintendent Javier Montañez said in a February city council finance meeting. "And when I returned as an educator, I found that those buildings had the exact same problems decades later."

This second phase of construction is expected to result in several "like-new" school buildings, in addition to the new building at Peace Street, which will use up the largest share of the $140 million bond money.

WPRI 12 News said a new Spaziano Middle School will be built in the existing Spaziano Elementary School, at a price tag of $27 million, according to the application.

But first, the district will need to complete a renovation at the vacant Windmill Street School — recently renamed the Narducci Learning Center — to use as swing space for students.

The Providence news outlet reported that that will allow Veazie Street students to have classroom space at Windmill while their new school is under construction in 2025, according to the documents. In addition, Fogarty students would move into the new Peace Street school at the old St. Joseph's Hospital, and Kizirian students would go to Windmill in 2026 while their school is renovated.

"This allows us to do transformational work," Deputy Superintendent Zack Scott told the city's finance committee. "That is not just about roofs, walls and boilers. It is about new building spaces that we know our community has sought."

Those renovations will include building welcome centers and collaborative spaces for both students and teachers, Scott said.

Providence voters similarly approved a $160 million bond in 2018 for Stage I, where construction is still underway and expected to be finished next summer. That phase includes the $30 million renovation to

Stage I also includes demolishing the Spaziano Annex to build a new K-5 school. The new Spaziano Middle School for grades 6-8, a part of Stage II, will then be built inside the existing Spaziano Elementary building.

Between the two phases, Scott said a third of Providence students will be learning in a "fundamentally transformed" school building.

Still, more structures beyond the ones in the plan need significant rehab, WPRI 12 News reported. The application to RIDE said the city cannot seek more bonds until 2029, though it can apply for state funds through the state's School Building Authority.

The Providence school district also is taking declining enrollment into account in its plans, according to the application. Presentations by school officials show middle school enrollment is projected to fall, which could lead to a middle school being closed or shifted to a K-8 school in the future.