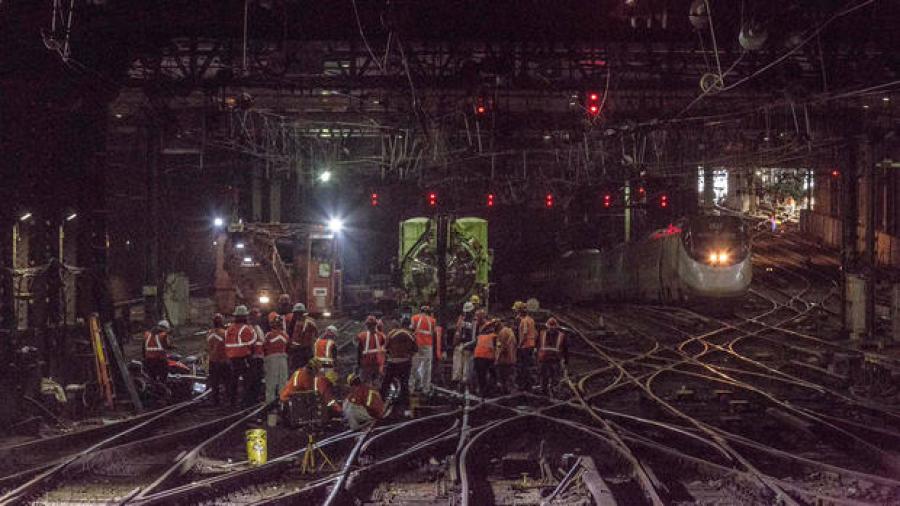 NEW YORK (AP) A massive two-month repair project will launch July 10 at the country's busiest train station, temporarily exacerbating the daily commuting struggle during what New York's governor has predicted will be a "summer of hell."

But it's only a stopgap measure against a root problem it won't solve: that one of the world's great cities increasingly seems unable to effectively transport its workforce.

At Penn Station, crowds of commuters fuming at frequent afternoon delays already wedge into narrow stairways down to the tracks, all for the privilege of standing in the aisles of packed trains for a 45-minute ride home. In the mornings, it can take 10 minutes just to climb a flight of stairs to the concourse.

The summer's accelerated repair work, prompted by two derailments this spring, will close some of the station's 21 tracks and require a roughly 20 percent reduction in the number of commuter trains coming in from New Jersey and Long Island. Amtrak also is reducing the number of trains it runs between New York and Washington and diverting some trains from Albany across town to Grand Central Terminal.

"We're all dreading it," said Maura McGloin, who commutes daily from Woodbridge, New Jersey, about 25 miles away. "I'd rather have my teeth pulled out."

Gov. Andrew Cuomo said in May that "it will be a summer of hell for commuters."

Penn Station is just one symptom of a larger illness. With an aging subway system subject to a recent state-of-emergency order by Cuomo, and a 67-year-old bus terminal called "appalling" and "functionally obsolete" by officials of the agency that runs it, the New York area's transportation systems embody America's inability, or unwillingness, to address its aging infrastructure.

Penn Station is a destination in itself, but it also is a hub for transfers, greeting about 600,000 passengers a day with low ceilings and dim lighting in what is essentially the basement of Madison Square Garden.

Commuter rail lines snake in from New Jersey to the west and Long Island to the east. Busy subway lines run through it, and it's the city's only Amtrak stop. Delays are common, and commuters often tweet photos with captions that can't be repeated here.

Amtrak owns and operates the station, as well as surrounding tracks and equipment. New Jersey Transit and Long Island Rail Road have used Twitter to pin blame for delays on the government-owned railroad.

One, caused by aging ties that allowed a track to split apart, closed eight tracks and disrupted service between Boston and Washington for four days. During a separate hours-long delay caused by a disabled train, police shocked an unruly person with a stun gun, leading to a stampede over fears of a shooting.

On July 6, there was another minor derailment at the station. No injuries were reported.

Rail commuters will suffer this summer's overcrowding and reduced service with the knowledge that the repairs won't add train capacity or eliminate problems like overhead wire failures in the tunnel that cause regular delays.

That won't happen until the completion of a $12.9 billion project to build a new Hudson River tunnel and overhaul the 107-year-old tunnel, damaged by 2012's Superstorm Sandy.

Amtrak officials have said its two tubes will need to be closed for repairs within the next 15 years, possibly sooner. Without a new tunnel, rail service would be reduced by an estimated 75 percent, from 24 trains to six during peak periods.

"New York City is basically this invention for creating human prosperity, and what makes it work is the access for the millions of people who live around the city," said Tom Wright, president of the Regional Plan Association, an urban planning think tank.

"Without these tunnels, without Penn Station bringing in hundreds of thousands of people from the east and west, New York can't continue to grow jobs," he said. "Without that connectivity, I really think we would see a national recession."

A 2014 report by the Federal Railroad Administration estimated that the loss of the Northeast Corridor, Amtrak's busiest line, for one day could cost nearly $100 million in impacts and productivity losses.

The tunnel project won an accelerated environmental permitting process under former President Barack Obama, and a preliminary report was released Thursday. Early construction wouldn't begin until late 2018, officials said, and that probably will depend on the federal government putting up half the money, as agreed to under Obama. But Trump's budget proposal recommends a change to a federal grant program that could jeopardize that funding.

The years of neglect are evident throughout the Northeast Corridor, connecting Washington, D.C., and Boston.

Amtrak says it has an $11.6 billion backlog for basic infrastructure projects — tracks, signals, electrical systems and more. That's on top of an estimated $26.5 billion in backlogged projects considered essential, a list that includes a new $4.5 billion tunnel in Baltimore to replace one that dates to the 1870s.

On the bright side, some other large-scale projects are pushing ahead.

A new, $4 billion Tappan Zee Bridge, a major Hudson River crossing north of the city, will open this year. And last fall, Cuomo announced plans for a long-delayed project to transform a historic post office near Penn Station into a new train hall by 2020 that should ease crowding. The plans also call for widened corridors and raised ceilings in Penn Station.

While not a final solution, this summer's Penn Station work should give commuters a measure of reliability.

"What commuters have every right to expect and should expect is that as we go through the next period of months, that we gradually take away some of the problems that have been causing delays in the station over the past number of years," Amtrak CEO Wick Moorman said this week.

Marybeth Tregarthen, 52, has commuted from Bay Shore, on Long Island, for about four years, and has found her own antidote to being stuck regularly at Penn Station.

"Sometimes I just jump on any train heading out of the city, even if it's not my branch," she said, "just to escape from New York."