All seven projects were identified by the city through extensive consultation with residents and their elected officials. 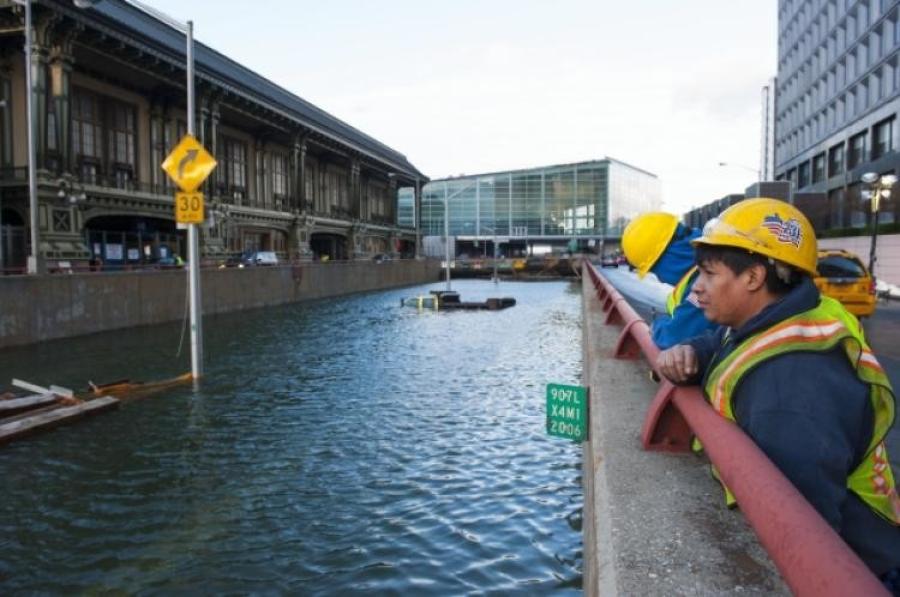 On the Oct. 29, 5th Anniversary of Hurricane Sandy, Mayor Bill de Blasio announced a $145 million investment for up to seven resilience projects to help protect communities in the Rockaways from the impacts of climate change. Each project will be designed to improve quality of life and build more resilient neighborhoods in the Rockaway peninsula that will be better prepared to withstand future flooding and coastal storms. All seven projects were identified by the city through extensive consultation with Rockaway residents and their elected officials.

"These investments are an important step forward for Rockaways residents, connecting them with parks and the waterfront, while helping shield them from future storms," said de Blasio. "The community will see a lot they will like in newly renovated parks, and will feel safer because of the flood protections that will be built in. New York is building this kind of smart infrastructure to fight climate change and inequality at the same time, so future generations will inherit a city that's more resilient and just."

This past February, the city submitted a list of recreational and resiliency projects to be considered by FEMA for funding from cost savings from the Rockaway Beach boardwalk reconstruction. A total of $480 million was obligated for the Rockaway Boardwalk project, and Mayor de Blasio committed to keep any additional funding that was not spent on the boardwalk in the Rockaways. $120 million was saved from reconstructing the Boardwalk. Under FEMA 428 program rules, the city was able to allocate the saving to other resiliency projects. FEMA reviewed the City's application and approved the full amount to be used on the submitted recreational and resiliency projects pending approval of environmental and historical preservation reviews. This was supplemented by a contribution of $25 million from the administration, Borough President Katz and other public and private sources. With FEMA's approval, the city will now be able to complete design on following seven projects, moving them another step closer to construction, subject to final FEMA approval.

Bayswater Park. This project will install berm along the waterfront and other features to help manage stormwater. It will also include new sports fields, play areas, a public plaza, a refurbished comfort station and access for kayaks.

Edgemere Raised Shoreline. This project will raise the shoreline around the Edgemere neighborhood. It will include new vegetated berm and new bulkheads to help mitigate coastal flooding.

Shore Front Parkway Recreation Zone. This project will include six new recreational facilities along Shorefront Parkway to replace those lost during Hurricane Sandy.

Rockaway Community Park. This project will include raising the shorelines around the parks's eastern and western edges as well as restore the native wetlands as a natural buffer between the park and Jamaica Bay.

Beach 88th Street Park. This new waterfront park will include a new seawall and restores wetlands to mitigate against tidal flooding in the Rockaway Beach neighborhood. It will also include play and seating areas and kayak access.

Thursby Basin Park. This project will transform a vacant lot into a park with seawall and new resilient vegetation along the water to help protect against tidal flooding. It will also include new sport courts, play equipment and a kayak launch.

NYC Parks Operations Headquarters for the Rockaways and Broad Channel. This project will elevate parts of the facility to protect from future flooding and ensure it can as a response center in the event of a future storm.

FEMA shared their enthusiasm and appreciation of the City's ability to identify these projects which will provide additional resiliency features to the peninsula's shorelines, improve NYC Parks" operations and emergency response throughout the peninsula and Broad Channel, and supply the communities with both renovated and new parks.

Public scoping meetings to begin these projects are expected to be held starting in spring and summer 2018.

Hurricane Sandy struck New York City in October 2012, taking the lives of New Yorkers and causing $19 billion in damages and lost economic activity. It also laid bare pre-existing challenges in the city's waterfront communities and highlighted our vulnerabilities to coastal storms and rising seas. The city's climate vulnerabilities, which also include increases in heat and precipitation, are also exacerbated by other challenges, including an increasing population, aging infrastructure and rising inequality.

In the aftermath of Hurricane Sandy, it was imperative that New York City emerge a stronger and more resilient city, one that did not just prepare for the next storm, but one that invested against a wider range of threats. In March 2014, Mayor de Blasio created the Office of Recovery and Resiliency (ORR) to implement the city's comprehensive OneNYC climate resiliency program. Since Sandy struck, considerable progress has been made to recover from the storm and make the city ready for the future impacts of climate change.