Constructed in the early 1960s, the TWA Flight Center opened in 1962, “ushering in a new era of jet air travel,” according to a fact sheet on the project. 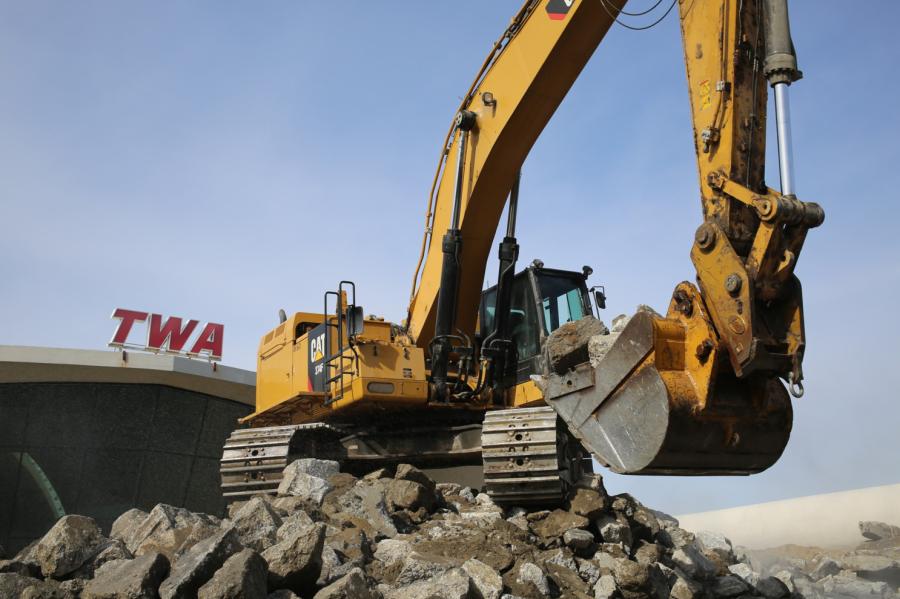 In February of this year, workers began excavation work for the foundations of the hotels and conference center, which will sit just behind the original building in deference to the landmark. (MCR Development photo)

Construction workers have the opportunity to take part in all kinds of different projects, many unique in their own right. But a $260 million project under way at the JFK Airport in New York is bound to top career memories for many workers on site.

It's a multi-faceted task that involves rehabilitating the iconic Eero Saarinen terminal — also known as The TWA Flight Center — and constructing two seven-story hotels and a 50,000-sq.-ft. subgrade conference, event and meeting space.

“It's not often you get to work on a piece of art like this,” said Jason Garone, vice-president of construction of MCR Development, a partner in the public-private partnership with The Port Authority of New York and New Jersey. “This is very unique. There is only one of these.”

Constructed in the early 1960s, the TWA Flight Center opened in 1962, “ushering in a new era of jet air travel,” according to a fact sheet on the project.

“It is a reinforced concrete structure,” said Gary McAssey, project executive for construction manager Turner Construction. “It is a large span roof structure, supported off of four large columns. The roof and the shape of the roof is what is unique about it. It was formed with scaffold and with plywood planks and took two years to form. It's an amazing building.”

But from the day the Flight Center opened, it was already considered functionally obsolete as jets grew larger, technology ever more cutting edge. In the 1970s and '80s, the flight center was expanded with what some described as “bat wings.” In 1994, the terminal was designated a New York City landmark, and listed on the National Register of Historic Places and the New York State Register of Historic Places in 2005. The terminal was closed in 2001 and has remained in the dark since.

Now, that's about to change.

Work began in May 2016 on utility work, abatement and selected demolition in the existing TWA building. The so-called batwings were removed and the original wing structure is currently being restored.

In February of this year, workers began excavation work for the foundations of the hotels and conference center which will sit just behind the original building in deference to the landmark.

“We've excavated the north hotel and we've poured the foundation slab,” said Garone. “We're currently working on the concrete walls. One-third of the conference center slab has been poured. Because there is so much ground water and hydrostatic pressure, we have to tie down the slab. The tie-down is meant to prevent the building from lifting. We're really close to Jamaica Bay here. In the 1920s and '30s, they effectively backfilled all this marshland. This is a typical story of where they backfilled on top of vegetation, when you dig down, you have a peat layer, compressed vegetation. Below that peat layer, you have this beautiful sand. It's like building sand.”

The dewatering process calls for some special equipment, including a 2,000-gal. a minute pumping system. The water is then passed through a filtering system before it is disposed. Workers are using the soil mix method to support excavation. Drill rigs modified by the contractor drill cylindrical casings, which are reinforced with beams.

“As you drill, you inject a grout mix,” said McAssey. “When it hardens, it creates a wall around the building. It's an interesting method for supportive excavation.”

Other equipment includes large excavators and two small cranes for setting form work. A 200-ft. stick, 300-ton crane is expected on the job to do the steel work to create the new roof line.

Other project features include a curtain wall system with very high acoustic ratings and designed to blend in with the green-hued glass of the original building; a rooftop pool and bar, retail space, 505 hotel rooms and a 10,000-sq.-ft. observation deck. The original TWA Flight Center also will act as a historical museum of sorts with displays of old artifacts.

“The restoration of the existing TWA building was a challenge, but it's a nice challenge,” said Garone. “I'm extremely proud to be part of it. I've worked all over the world on a lot of different projects, big residential projects, commercial projects. I built an airport in the U.K. I've worked on amazing projects in New York City. Every project is unique and comes with its own challenges. This is very unique. There is really a little bit of everything here. It's one of a kind. It's very special.”