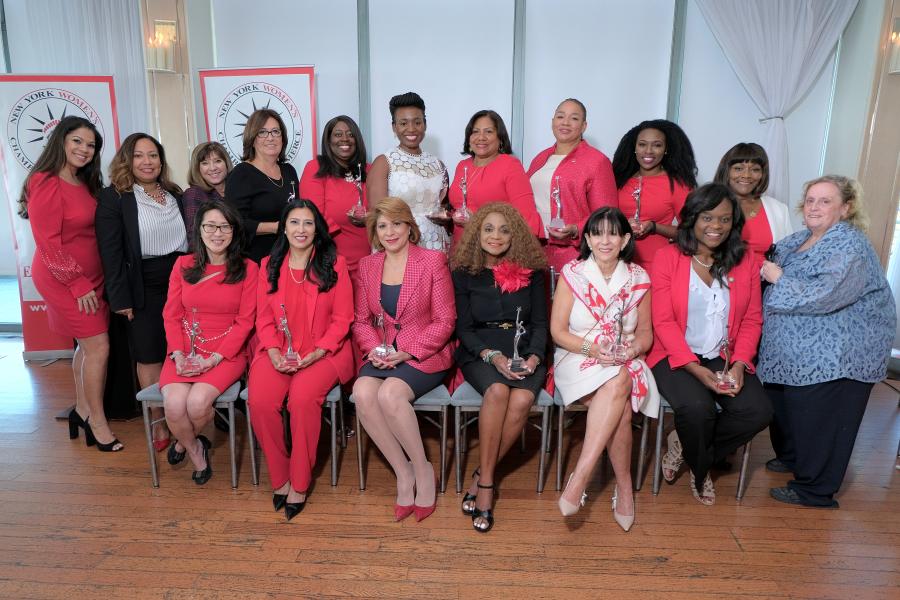 "We're here to make sure women get a piece of the pie," said Quenia Abreu, president and CEO of the New York Women's Chamber of Commerce (NYWCC), opening the organization's 17th annual Women of Excellence awards held at Battery Gardens Restaurant on Sept. 20. Abreu noted that women still receive only 4 percent of contract opportunities overall and women of color less than 1 percent. "We're going to do better, we're going to make it happen," said Abreu.

The NYWCC's ContractHER program, launched last year, currently is preparing 40 women to do business with the city and state.

"We're helping to put women-owned businesses in front of agencies and prime contractors," said Abreu, asking the audience for support and, most of all, to "Contract HER!"

Lorraine Grillo, president and CEO NYC School Construction Authority (SCA), commissioner Department of Design & Construction (DDC), noted that "the NYCSCA has an amazing MWBE program thanks to my team." Gottesman said that Grillo's "support for women has been unwavering."

Shendora Pridgen, executive director and global head of supplier diversity, Morgan Stanley, told all that "Diversity is fundamental to our role as a global leader."

Francilia Wilkins Rahim, CEO and founder, R.F. Wlkins Consultants Inc., whose firm is, noted Moore, playing a key role in "ensuring minority inclusion in the JFK project," told attendees to "keep doing the good work to make sure this City is Contracting HER!"

Eugenia Foxworth, president and owner, Foxworth Realty and a NYWCC board member, thanked Abreu and all present who helped her business grow in Harlem, saying "I hope you all will support women in business."

Cira Angeles, president & CEO, LA Riverside Brokerage Inc., said that the livery-based association she works with is helping her "be the voice for women in rooms filled with men."

Sarah V. Man, managing director-investments, The Voyage Group of Wells Fargo Advisors Inc., said "we are the authors of our life's journey" and defined her role as helping "women protect their financial future."

Gladys Lopez, global head, supplier diversity, BNY Mellon, pledged that her company "will work to further opportunities for women of color in the NY-NJ area."

Kimberly Hardy, vice president of compliance, McKissack & McKissack, thanked Scanlon and Abreu, "a fierce advocate for women throughout the city and the country [who] works tirelessly to empower women…and all people to lead better lives."

Zenaida Rodriguez, assistant director, Business Diversity Initiatives Unit, MTA Department of Diversity & Civil Rights, called "a force of nature" by Velez, asked all to "prepare yourself for the contracts coming down the pipeline."

Adeola Adejobi, CEO and founder, Avant-Garde Network (AGN) which focuses on "the intersection between business and diversity," welcomed the opportunity to "be part of this amazing class of women," noted the obstacles all women and especially women of color face, and vowed that she "looks forward to collaborating with all."

Gentleman of Quality, Mark Gjonaj, NYC Council member and chair of the Small Business Committee, called small business "the backbone of our economy" and urged women-owned businesses to combine their purchasing power.