While a few punch-list items remain, substantial completion of the Oregon Department of Transportation's (ODOT) I-205: Paving & Auxiliary Lanes project in the city of Portland was delivered last December by Kerr Contractors Inc. on-time and on-schedule.

Crews began the work, part of the Keep Oregon Moving initiative, on March 26, 2018, with the work zone covering the highway (three through lanes in each direction) from Johnson Creek Boulevard to Glenn Jackson Bridge. House Bill 2017, Keep Oregon Moving funding, provided $30.7 million of the cost. 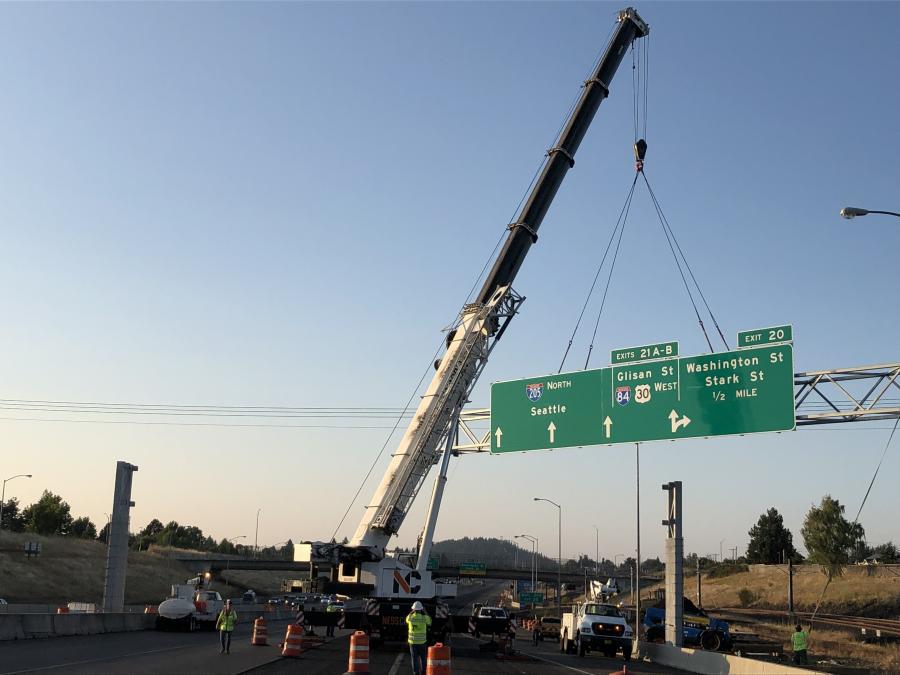 Region 1 Manager Rian Windsheimer said, "This project makes a difference. If you're driving I-205, you're already experiencing the benefits of auxiliary lanes and ODOT RealTime signs. These improvements are delivering on the congestion relief promise in HB 2017, to keep Oregon moving."

The project paved 9 mi. of freeway in both directions between Johnson Creek Boulevard and the Glenn Jackson Bridge, providing a smoother ride; constructed three auxiliary lanes to help reduce conflicts with merging traffic, ease congestion and improve safety at key bottleneck locations — one more expected to open in 2020; installed ODOT RealTime signs that give drivers the ability to make informed travel decisions by providing them with real-time information about traffic flow and roadway conditions; several ramps and intersections were updated to new ADA standards; eight new water quality treatment facilities were built; and improvements were made to the I-205 shared-use path entrance at Glisan Street and other local streets to accommodate pedestrians and cyclists. RealTime Sign locations include I-205 southbound at Airport Way and Division Street, and I-205 northbound approaching I-84, among others. 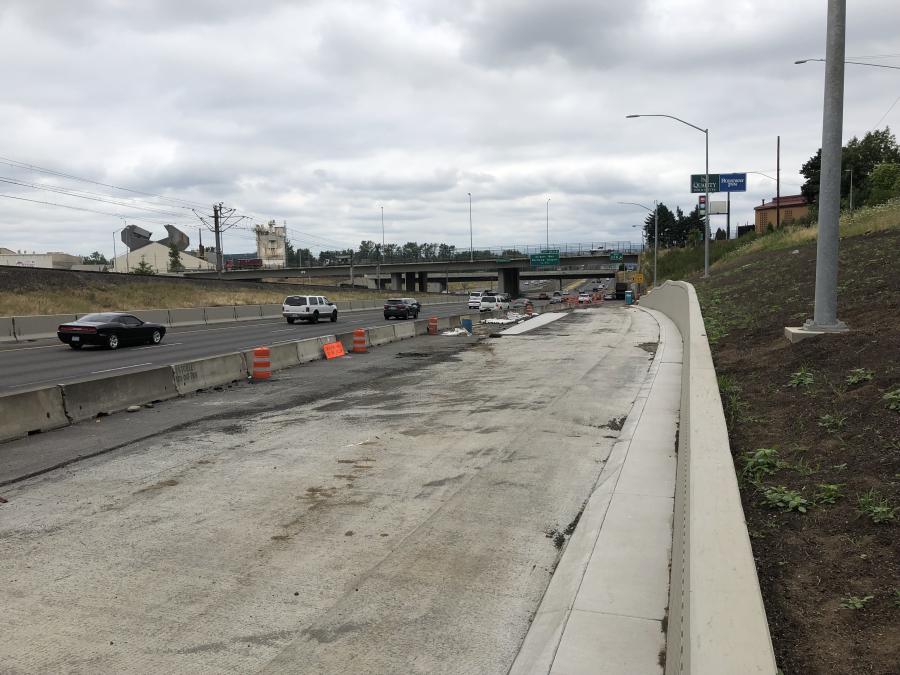 "This completed project came in on time and on budget," said Jackson. "After ODOT installed RealTime signs on Oregon 217, the number of crashes dropped by nearly 11 percent in the first year. They do make a difference in helping everyone get where they're going safely and efficiently. ODOT expects the new auxiliary lanes to reduce the frequency of crashes by up to 30 percent."

"Nearly 1,015 feet worth of concrete foundations were poured for 24 sign structures, some going down as deep as 61 feet," said Jackson, who noted that 17 new structures were raised, including a sign bridge spanning both directions of I-205 at the Johnson Creek Bridge and other sign bridges, and cantilevers and monotube structures along I-205 in each direction.

ODOT engineers and staff designed the new roads and infrastructure. The auxiliary lanes will not increase capacity. The average daily traffic on this section of I-205 is 168,000 trips. 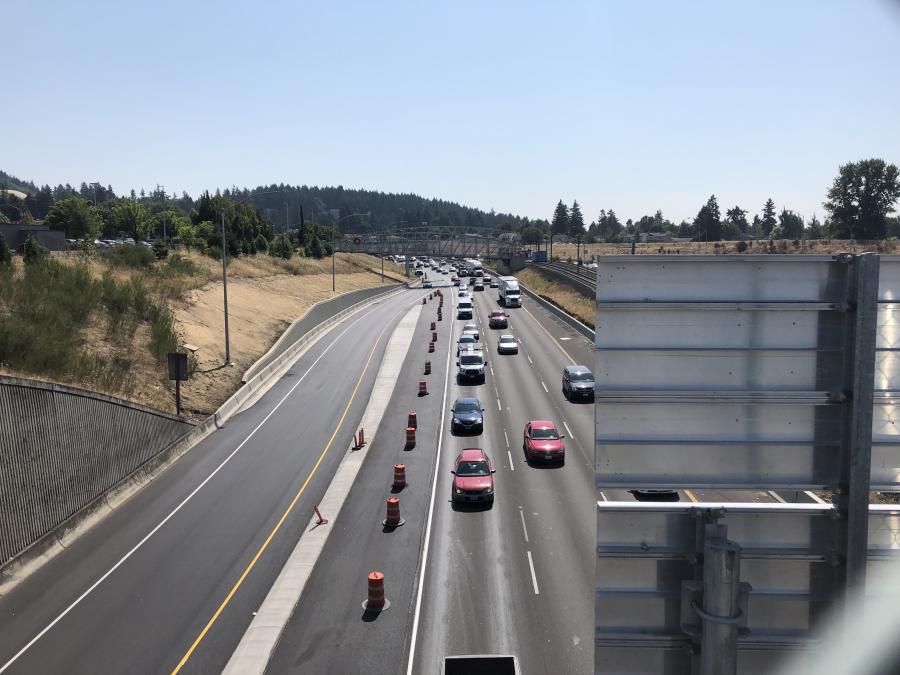 The traffic plan was based on lane closures and detours to keep motorist and construction workers safe and maximize the construction, which had crews working 24/7 for several consecutive months.

David Finnigan, Kerr Contractor's project manager, knew that the project had many challenges.

"Traffic control was the biggest challenge, especially at night with the lane closures when you could have crews working in the middle of the travel lanes," he said. They allowed travel lanes to be closed from about 8 p.m. to 5:30 a.m. for a single lane closure and 10 p.m. to 5 a.m. for a double-lane closure, so there was a short amount of time for the milling and paving operations. There was a lot of night work — we worked probably six-to-eight months straight at night during the 2018 and 2019 construction season. It was difficult for the crews and we lost some people. Night work is not for everybody, but we tried to be flexible and rotate people around if possible. We also tried to re-arrange the traffic control so that we could work to areas during the day instead of at night.

"There were very few utility issues and the ones that were issues, were known about from the beginning," he added. "Our relationship with ODOT started off a little rocky, but as the project went forward, an excellent working relationship developed. When we had questions or issues arise, we received the most timely responses we've ever seen from ODOT. This started off as a $26 million dollar project and then we got another $15 million project — a trigger project that had to be completed on time so that the state legislature could increase the gas tax. We met their timelines."

Getting the Job Done 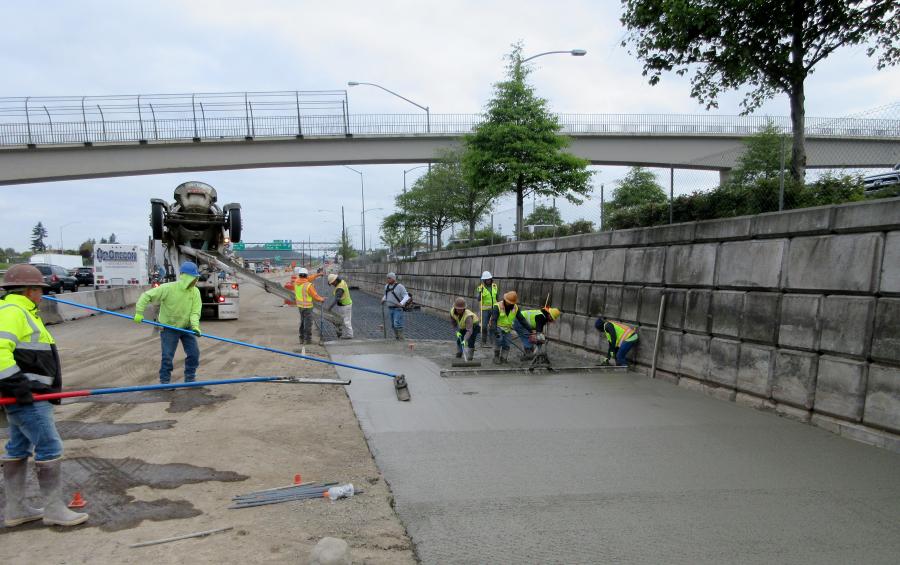 "This was done so we wouldn't have to move the equipment all the way back to the south end of the project," said Finnigan. "Most of this was done at night. We had some issues with de-lamination of the existing asphalt pavement section of the roadway, that had 2.5 inches of asphalt over 10 inch concrete panels. In some of the areas where the mill came through, there would be asphalt left on top of the concrete. We also did some improvement of subgrade for the widening of the additional lanes, and in some of those areas, we had to go deeper due to subgrade issues and replace with large rock. But that is to be expected when the shoulders of the roadway are exposed to the elements for years."

Last spring the southbound auxiliary lane was opened to traffic, while the northbound lanes were opened in the summer and late fall respectively.

"The plan of attack was to do the bulk of our excavation first and install the manholes, inlets, and storm pipes," said Finnigan. "Then we placed the aggregate base, concrete panels, and the new asphalt paving. Our crews were working in multiple areas — we had two lanes to build in phase 1 and one in phase 2. For the widening and auxiliary lanes we also had to remove the existing storm pipe and place new storm pipes, manholes, and inlets at the edge of the new lanes. For phase 1 of the project, we opened the southbound auxiliary lane in nine months. We spent a lot of time planning the work schedule and it proceeded as planned."

The new water treatment facilities had new swells constructed and existing ones renovated.

"The work did go well," said Finnigan. "It was done by Fox Erosion Control, one of the subcontractors, because a special mix for water control and filtration, goes into the swells that filter the storm water run-off. Our crews performed the excavation for this element of the work."

Crews installed 58 signs, with many of them installed at night and 24 requiring deep pile foundations. Much of this was done in the second phase of the project.

"To get the structures up, we had to first drill concrete foundations that were roughly 30-feet deep at each of the locations — about five-to-six feet in diameter," said Finnigan. "We put in steel reinforcement cages. The foundations had to be done quickly before the ground caved in. Shoring helped to keep the shafts open. In some spots we encountered ground water, which made it more difficult to put the foundations in. Those would take three days a piece and we progressed as best we could."

The foundation work was subcontracted to Pacific Foundation, which was using highly specialized equipment that included excavator mounted drill rigs and oscillators. It was crucial to keep this equipment in pristine shape to meet the benchmarks, especially as much of this work was done during lane closures. Electricians often installed the wiring and conduits for the electronic signs at night, as well as drilling underneath the highway to hook up the new systems to existing power sources.

Many sign structures are massive in size and heavy, which required cranes to lift and set them in place. 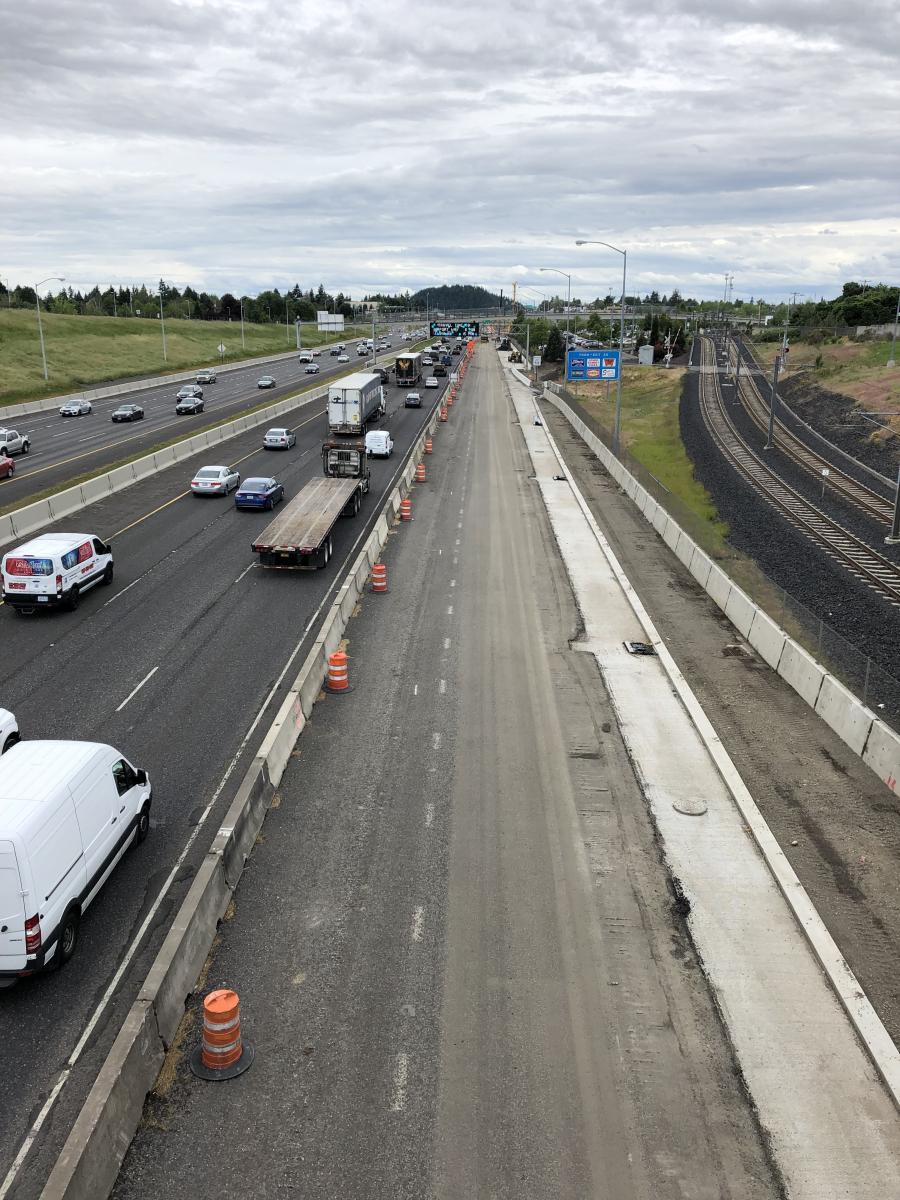 "Three of the structures, that were truss bridges, spanning over the entire northbound lanes, were delivered during a weekend closure," said Finngan. "During phase 2, ODOT allowed us to perform a weekend closure of the northbound I-205 for four miles. We not only raised three structures, but we milled and paved nearly all of the area, putting down about 15,000 tons. "

A typical sign took three days to install, with one day or one night shift to hoist the vertical posts, another to construct the bridge onsite, and a third day to hoist and install the bridge.

The largest bridge was placed on the Glenn Jackson Bridge, which connects Oregon to Washington State via I-205.

"For this installation we had a special freeway closure," said Finnigan. "We detoured traffic to the I-5, another north-south freeway located to the west.

"Hedberg was a big part," said Finnigan. "The team dynamic was pretty good and we all worked well together."

Peak days had around 25 Kerr and subcontractors for the day shift and a similar number for the night shift when paving operations occurred. The subcontractors included Lee Contractors for bridge joints and concrete paving, Aaken Electric for electrical work on phase 2, and Coral Construction for sign installation.

Crews removed 120,000 lbs. of asphalt and replaced it with a similar amount.

"Recycling was big," said Finnigan. "We typically recycle all of the asphalt on the project and all of the concrete recycled either into the project or in others in the area."

The elevators allowed Kerr to run belly dump trucks and drop the asphalt on the ground in windrows in front of the paving operation.

"This allowed us to pave as fast as possible," said Finnigan.

"When they were doing the paving at night, they had their own mechanic onsite," said Finnigan. "During the day, we had a mechanic dedicated to all the jobs in the area."

Kerr Construction has a sizeable fleet, which is engaged in many projects in the Portland area and dedicating resources for maintenance ensures the equipment operates efficiently.

"We typically don't rent equipment," said Finnigan, "but when we do it is typically for smaller, specialized items."

The firm purchases and rent equipment from local and regional dealerships.

Kerr Contractors also is being pro-active and has shared ownership in local dealerships, as it has done with subcontractors, suppliers, and other construction resources, such as the one it uses for shoring operations.

"By no means was this an easy project," said Kerr. "Having good communications with the owner is very important and you have to keep them in the loop and work with them though issues as they are solved for the best interest of the project."

The following video, produced by ODOT, shows the improvements that were made: - https://www.youtube.com/watch?v=6jEfsdCXNUY&feature=youtu.be. CEG