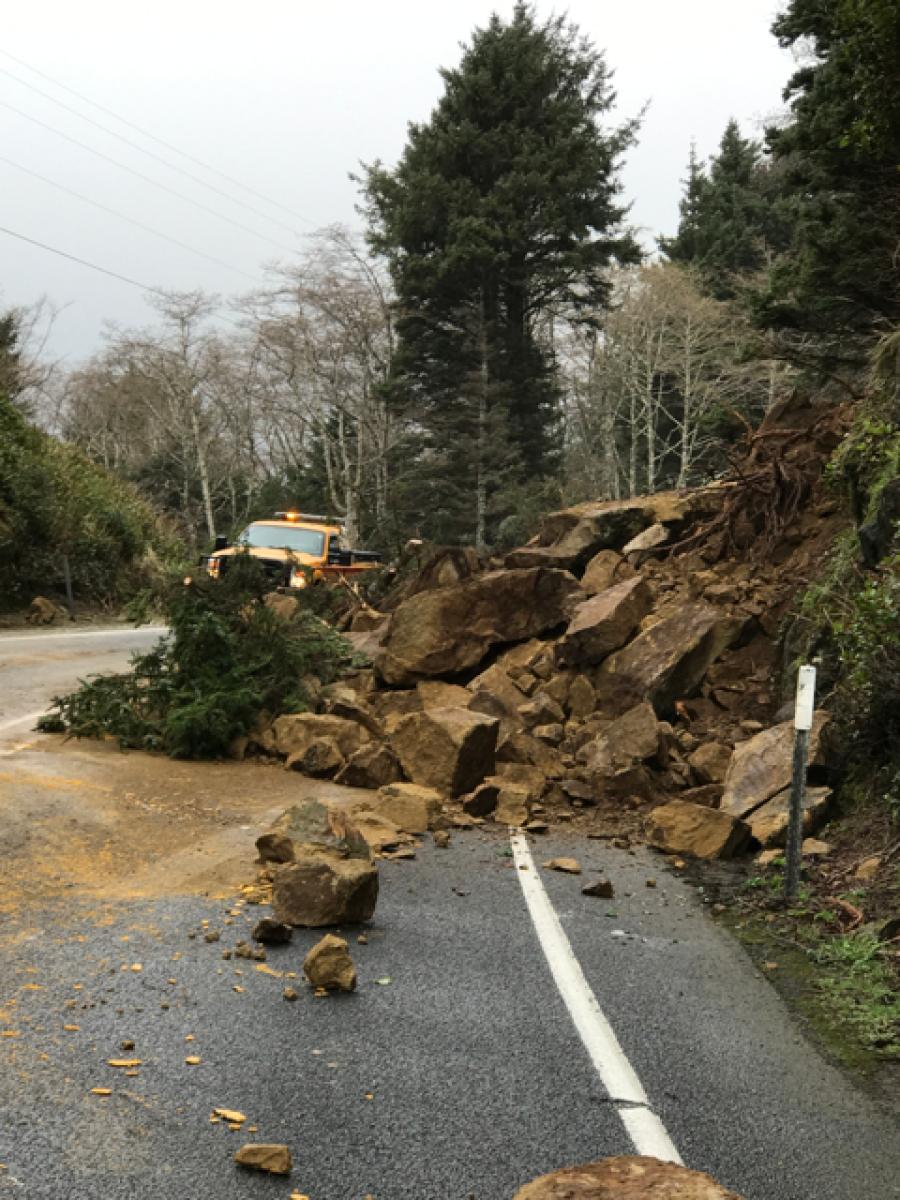 Crews used dump trucks and front-end loaders to scoop out the larger pieces of debris. They hauled 27 loads of debris away.

When word of a slide came in the wee hours of Feb. 22 on one of the most scenic portions of Oregon's Highway 101, the Oregon Department of Transportation was quick to send out a crew, but work on the slide would have to wait.

“It was dark,” said ODOT spokesman Lou Torres. “They heard the sounds of rock and other materials still coming down. It was still an active slide. We didn't want to put anyone close to it.

Typically what we do, especially at night, is we tell our folks to move back and keep out of the way. We just close the road to traffic and that's what we did. Even though there was a little bit of room in southbound lane, we didn't want anyone going near that slide if it was active.”

At daylight, geologists from the ODOT geotechnical engineering department were better able to assess the damage. It was more of a rock slide than landslide, near the Arch Cape Tunnel.

“Engineering wise, they really had to fit it in tight,” he said. “There is a pretty big drop off from 101. It's a couple of hundred feet high if I remember. I try not to look down.”

The geotechs determined professional rock scalers would be needed before crews could be sent in to clean up and reopen the highway. That meant travelers would need to take Highway 53, a winding country road that would take them an hour and fifteen minutes out of their way.

ODOT contracted with TRIPTYCH Construction LLC, based out of Douglas County, Ore., with 30 years of experience in rockfall mitigation.

“A scaling company has the expertise to send people up the slide,” Torres said. “You just can't send anyone up there. They have to know what they are doing. the scalers were able to move the close rock and debris that would likely come falling down on the road. That's important. It's hard to get maintenance crews out to those locations quickly. We didn't want any more rock falling on vehicles. The scalers either have to climb it or usually find a way around it and tie themselves in so they are secure so they can almost repel along the rock wall, around the sides of the slide. It's hazardous work. You really have to know what you are doing. They try to stay above the slide, but the main hazard is losing their footing.”

Meanwhile, crews using dump trucks and front end loaders worked to scoop out the larger pieces of debris. They hauled 27 loads of debris away. Although it wasn't necessary on this slide, they will sometimes bring in large cranes with scoops to work on higher areas.

By early that evening, ODOT was able to open one lane with flaggers controlling traffic. The plan called for the scalers to return in the morning at which time ODOT expected to again close Highway 101 to allow crews to continue the clean-up operation.

“Mother Nature didn't cooperate,” said Torres. “That night and that morning we got quite a bit of snow on Oregon 53. There was ice and snow on 53 and ice on Highway 26. We didn't want to put the detour traffic on a road that was going to be pretty slick. So, we put some barrier between the North and Southbound lanes at the slide and continued to flag the traffic so we were able to keep 101 open.”

Land and rock slides are not unusual on the Oregon Coast, but the weather conditions for the time of year were, Torres said.

“We've had a very, very wet winter through most areas of the state, but especially along the coast. There was a period in late December and January when we had a number of days of cold temperatures. The freezing and thawing with all the moisture — then you put on top of that a record rainfall and you have a rain/weather induced event. We've had a number of those this winter. Some big, some small. Oregon 36 in Lane County closed for several days to remove slides there. A winter like this you would expect those kinds of slides. We could have quite a few more before we start drying out. We get these on a typical winter. This winter hasn't been typical. It's kind of ironic. We were going to use a detour route but it got snowed on. That's really unusual for February/March.”

“Everybody complains how we're not prepared. But it's not the snow that is the problem, it's the ice. We're so hilly out here. Our roads are not these straight roads like Ohio or Wisconsin. Sure, they get a lot more snow, but we have to deal with the geology. The geography is very different and the ice we get here is a different kind of ice. You get the freezing rain, you get rain that freezes after the temperatures drop in early morning. You might have rain and then boom ice on the road. Freezing fog. Shady areas — ice. What really got us during that cold snap, we had snow and then frozen temperatures. The snow would melt and then freeze. Melt, refreeze, melt refreeze. It's a challenge for anyone trying to drive in those conditions.”—CEG