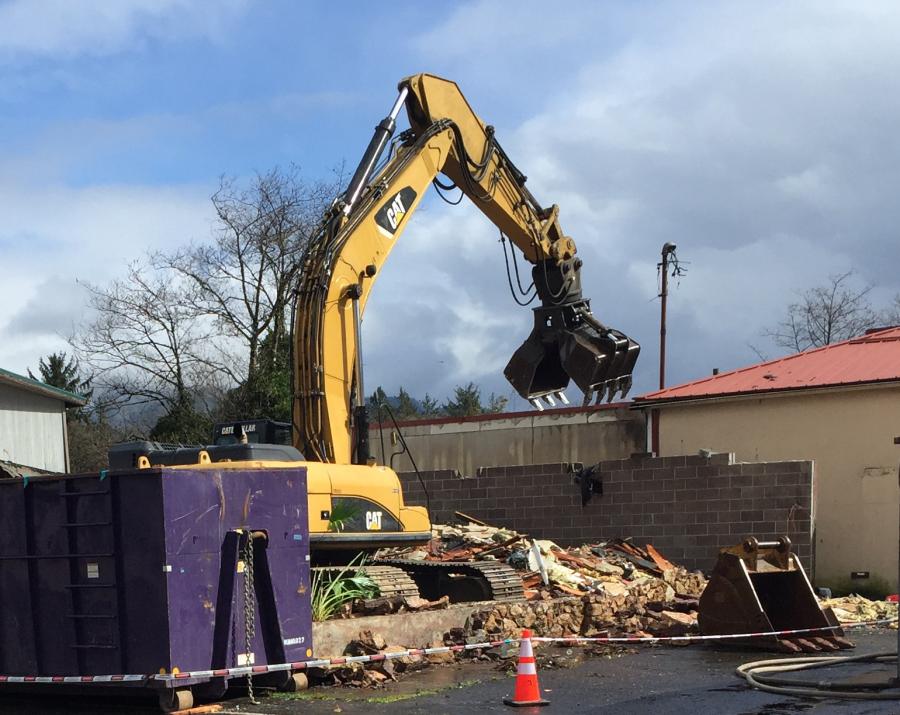 The old hotel was purchased through right of way acquisition and then demolished. (ODOT photo)

The city of Tillamook, Ore., has had traffic problems for years. The highway through downtown was much too tight to accommodate the semi-trucks and RVs that routinely rumble through, pedestrians felt unsafe crossing the streets and the intersection of Highway 101 and Oregon 6 was described as “one of the most convoluted in the region.”

“I've had people describe it as white knuckles through there,” said Louis Torres, spokesman of the Oregon Department of Transportation. “Do I go straight? Right? Do I bear left? There was a lot of signage and it was really confusing. When they built that road through there I don't think anyone envisioned we would have so many large trucks and large SUVs. It got very tight and very confined. It was very difficult to cross the streets. It was kind of intimidating to be honest.”

Now, a $38.2 million project will not only fix the problematic roads, but revitalize a once thriving, long since declining downtown.

“I think it's going to pay off huge dividends for the county,” Torres said. “There will be new sidewalks, a new plaza, new crosswalks. The governor was out there and she hit it right on the nose when she said it's a huge boost to the county. It's just going to contribute heavily to the revitalization Tillamook has been waiting for.”

Funded in large part by the Jobs and Transportation Act passed in 2009, the project got under way in 2015 and is expected to be completed in the fall of 2018.

In order to rework the 101/6 intersection, crews had to separate traffic, which meant demolishing two old bridges and replacing them with two new bridges and a new road that will connect to Highway 101. The new bridges will be higher than the old bridges, which ODOT hopes may alleviate some of the flooding in the area Tillamook is noted for.

“We just finished the east side bridge and now have traffic going over that bridge north and south,” Torres said. “Now that we have traffic operating on the new bridge, we will demolish the bridge to the west and build a new one there. We will have two lanes on both bridges eventually.”

Originally, projected to be a two-year project, it was necessary to extend it by a year to avoid road closures during the peak tourist season.

“We made a commitment with the city that we would not close any lanes in the summer and if we did it would be during nonpeak season times,” Torres said. “That means if you can't close lanes, the project will take longer. That's what the community wanted and we are making it work. The economic development side is a really big part of that. It was a tough sale. I think they were scared to death what this project would mean. With the construction, they thought businesses wouldn't survive.”

Keeping traffic moving and businesses open to customers were not the only hurdles ODOT had to overcome. Planners knew to expect rain — that's just part of life on the Oregon Coast. And they expected to encounter some pollutants. But in both cases, they just didn't anticipate how much.

The year 2016, which was the year crews began excavating, saw record rainfalls and revealed far more hazardous material than anticipated.

“There was an old mill and gas station on the site,” Torres said. “We had conducted core drilling and we knew the history of the place. What surprised us was the quantity of hazardous chemicals. We had to extract the chemicals, then we had to do a purification of the water before we could release it into the slough. We had to set up equipment to pump water out while we were excavating. We had to filter the water. We did go through the Department of Environmental Quality for that. That was an added cost and also delayed some of the work, but we had to address the issues.”

In addition to the excavators, water pumps and filtering system, heavy equipment on the site has included “just about everything you can imagine,” Torres said.

“This project is going to be a tremendous asset for the community. On the coast we get many, many people from out of the area, especially in Tillamook where we have the cheese factory and air museum. Tillamook has quite a bit people want to see. It attracts a lot of people so getting this intersection fixed is going to significantly improve that whole area. I think it's going to be huge.”