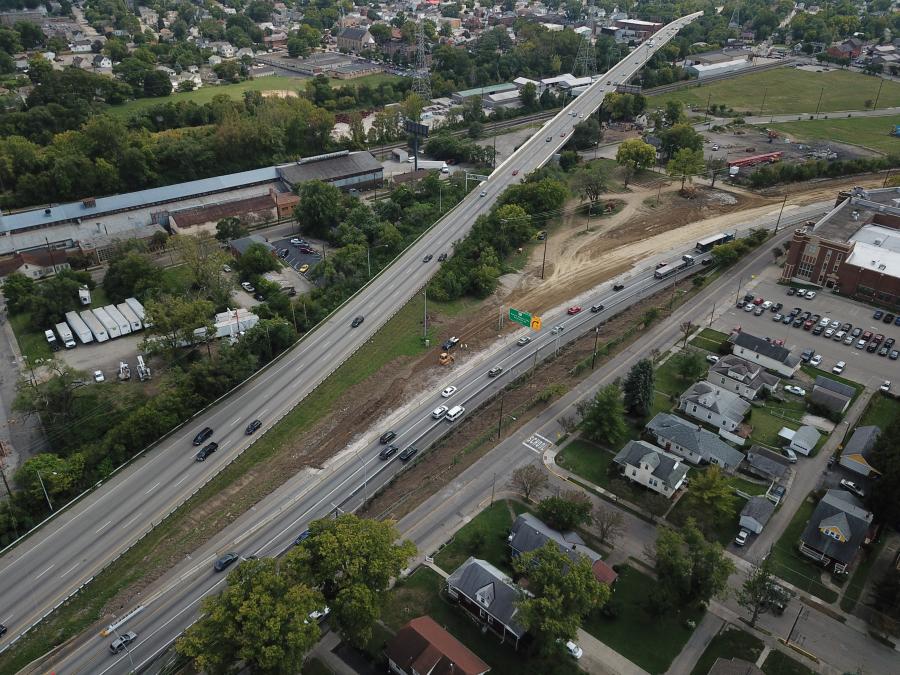 Work continues on Glendale-Milford Road and on the new Neumann Way on-ramp to northbound I-75.

Phases 1 and 2 of the Ohio Department of Transportation's (ODOT) seven-phase, multi-year I-75 Thru the Valley Project, which is valued at $500 to $600 million, began last spring when John R. Jurgensen Company (JRJC) crews began its $96 million contract. The company's portion is expected to be completed in the fall of 2020.

The ongoing work in the greater Cincinnati area covers approximately 2.7 mi. of I-75 from just south of Shepherd Lane to just north of Glendale-Milford Road. It is being funded by the Transportation Review Advisory Council and ODOT's Bridge and Pavement Funds.

The overall project covers nearly 8 mi., and will see a lane added on each side of I-75 (currently three-lanes in each direction); the resurfacing of the existing roadway; and upgrading of several interchanges from state Route 126/Ronald Reagan Cross County Highway to just south of I-275. An additional fifth auxiliary lane will be added where warranted.

The project's goals are to improve safety and ease congestion on I-75, increase regional mobility and provide transportation solutions that fit in with local residential and commercial development. The overall section being upgraded carries approximately 92,980 cars and trucks daily, and when completed, will meet traffic needs for several decades.

“All along the I-75 corridor we have traffic congestion,” said Brian Cunningham, communications manager, ODOT District 8, “and in particular, in morning and afternoon rush periods. These interchanges were designed in the 1950s, built in the 1960s, and do not meet today's geometrical design, nor traffic volumes. The area is also receiving a lot more through commercial traffic which we have to account for.”

The Phase 1 and 2 work was designed by IBE Group. 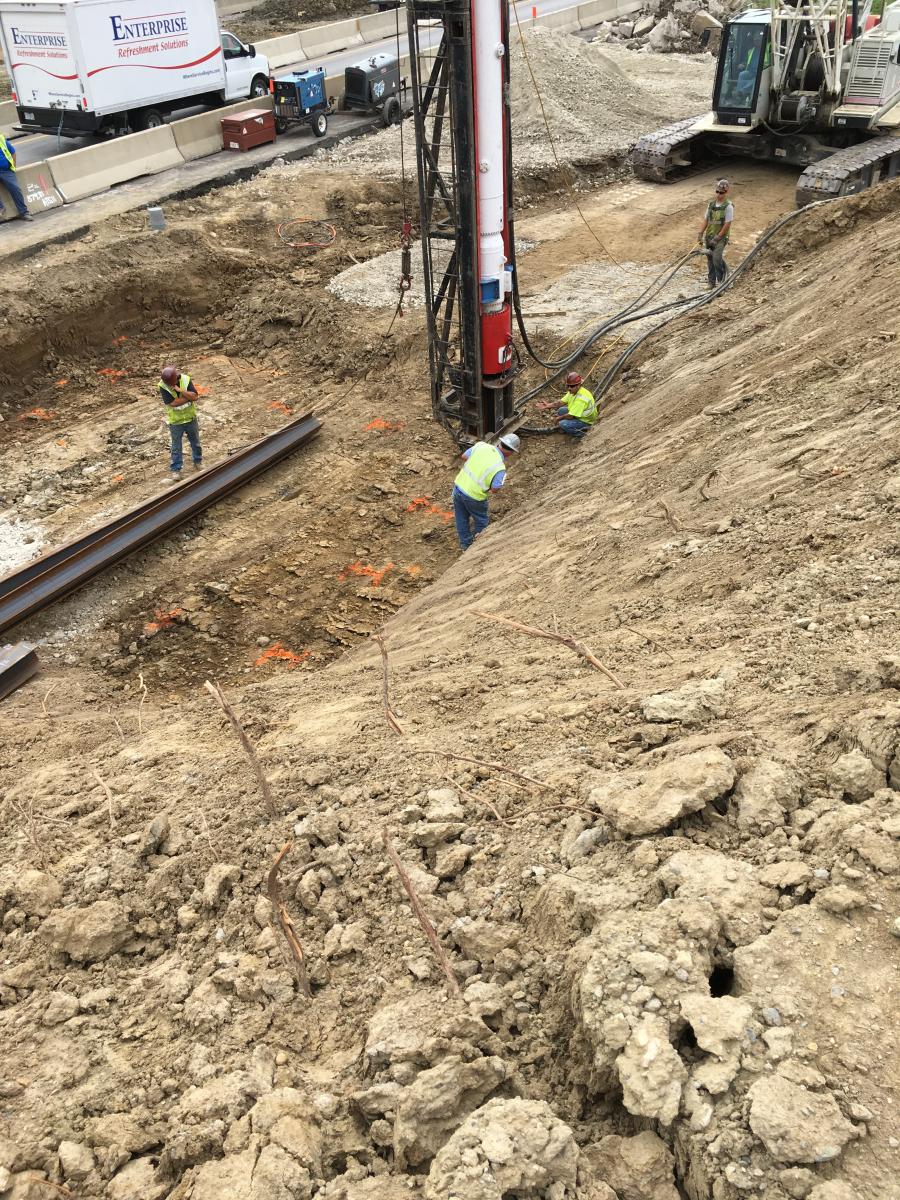 “We're looking at the pavement to last 12 to 15 years,” said Cunningham, “which may require some incremental maintenance work.”

The I-75 Thru the Valley highway is a multi-state concern, with planning for the upgrade beginning in 2000 when the North South Transportation Initiative and the Miami Valley Regional Planning Commission cooperated in a regional multi-modal transportation plan.

“Improvements are being designed to minimize construction impacts,” said Cunningham. “Every attempt is being made to maintain three lanes of traffic in each direction throughout the duration of construction, but there will be times that is not possible during night work.

For Phase 1, construction of the Glendale-Milford Bridge is under way.

“There are issues on every project dealing with inclement weather, scheduling conflicts and work zone crashes,” said Cunningham, “but we're not experiencing anything unique that is affecting the project. Right now, most of the work is occurring by day, and during the winter months, the work is minimal. We're expecting additional crews coming on at the end of February.”

Routine progress meetings are held with Jurgensen and other stakeholders.

The plan of attack for the new lanes and the reconstruction is based on removing all existing asphalt to dirt level, and replacing with 8-in. aggregate base and then 14.25 in. asphalt for the final surface course.

“For the I-75 SB mainline and SB collector,” said Cunningham, “they will be removing barrier wall and installing temporary pavement in preparation for traffic shift in the spring. Temporary signal and temporary roadway lighting installation is ongoing along Glendale-Milford and Evendale. North Evendale traffic was shifted in early December 2017 to the east onto existing and temporary pavement, with reduced lane widths. MSE wall construction along the north side of Glendale-Milford between I-75 and North Evendale, behind Mike Albert Leasing, will occur in the spring 2018.”

“This project is not atypical for an ODOT project,” he said, “there is just a greater volume of work in a three-mile area. What makes it unique is not only do we have to consider the travelling public, but also the considerable number of large private companies and industries in the area. Our progress is not only through the scheduling and planning process, but we have additional partnering and progress meetings on a weekly basis that are helping us to coordinate the work and mitigate issues as they arise.”

On an average day one can find nearly 25 to 30 JRJC and subcontractor personnel on site, with 40 plus on peak days.

As the project is still in its early stage, figures for the anticipated removal and recycling of materials and the use of new materials are yet to be determined.

This project is one of several megaprojects that ODOT is currently engaged in Cincinnati area.

“While we experience incremental improvement for local traffic,” said Cunningham, “we will not realize the full benefit until all the phases in the Cincinnati area have been completed. I-75 in Ohio has undergone major improvements along the entire corridor including in Toledo, Findlay, Lima, and Dayton. This work includes interchange and reconstruction of stretches of I-75.”

“We always seem to deal with hydraulic issues,” said Farrell. “Mostly of all of our equipment is run with telematics — both Trimble and Topcon. When we take the design and put it into a 3-D model, we always need to fine tune how the controls work on the equipment — we always need to have a technician on site to integrate the model with the control system on the equipment. For the most part our mechanics repair the equipment quickly, and we're pretty fortunate to be close to our home base of operation. The mechanics come out right away when there are issues.”

While Phase 1 and 2 are ongoing, Phase 3, which covers Galbraith Road, is expected to cost between $39 to $49 million and is anticipated to start in the fall of 2022 and be completed in the summer of 2024. This work will see the reconstruction of I-75 between bridge over the Mill Creek and Ronald Reagan Highway (SR-126), and a fourth lane in each direction. Phase 4 will cost between $22 and $32 million will start at the same time and be completed in the fall of 2022. It will replace a railroad bridge and realign the exit ramp to Galbraith.

The Phase 5 work, which will run between $63 to $73 million will start spring 2024 to spring 2025, and will reconstruct southbound I-75 from Shepherd to Galbraith, add a fourth lane and construct a collector-distributor road to provide ramps to and from Anthony Wayne and Galbraith.

Phase 6 — $125 to $135 million in spring 2027 to spring 2030 — will reconstruct northbound I-75 from Galbraith to Shepherd adding a fourth lane and construct a ramp from westbound Ronald Reagan Highway to northbound I-75.

The original Phase 7 plan was scrapped as its elements are now covered by other phases, and Phase 8, which will run between $35 to $45 million in spring 2020 to fall 2021 will see the reconstruction of I-75 from Glendale-Milford to Kemper overpass, adding a fourth lane in each direction and adding capacity at the Sharon interchange and at Sharon and Chester.

“During the 20-year period between 2010 and 2030 ODOT will invest between $1 billion and $1.5 billion in improvements along the I-75 corridor from the Ohio River to Warren County.” said Cunningham. “We will continue to work to complete the planned improvements to reduce congestion and improve safety along this vital corridor.”