The original road was built in the 1930s and on a daily basis carries approximately 19,000 cars and trucks. 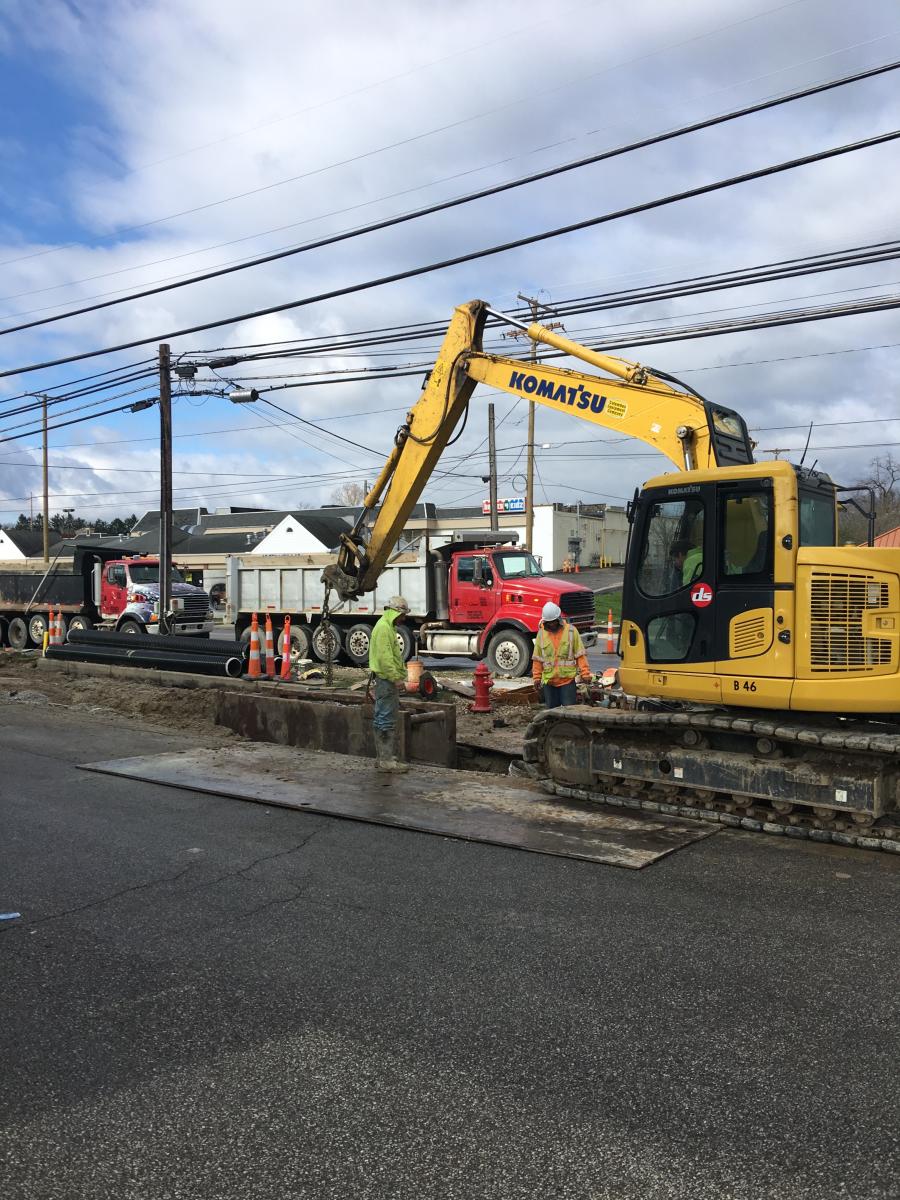 The work on the Ohio Department of Transportation's (ODOT) Medina U.S. Route 42 Widening Project began last October and crews from DiGioia-Suburban Excavating LLC (DSE) are expected to complete the project in October 2018.

The $17 million project, taking place within the city of Medina covers 1.5 mi. (2.4 km) of road just south of Harding Street to just south of Fenn Road. The road will be widened from one or two lanes in some areas to two thru lanes in each direction with center left turn lanes at side road intersections.

The original road was built in the 1930s and on a daily basis carries approximately 19,000 cars and trucks.

“There were numerous pot holes and the road was not in good condition,” said Rob Shenal, ODOT's engineer.

“The project is very important for the city because it will help existing businesses grow and help attract future retail and redevelopment opportunites to that corridor,” said Kimberly Marshal, economic development director of the city of Medina.

Safety improvements are being done at intersections to lower side swipe crashes, as well as angle crashes. Lighting is being added to the corridor, and improvement in the overall flow of traffic is addressing safety issues.

“Lifespan of the new road is 20 years,” said Shenal, who noted that decorative light poles are being installed and a new process, called cement stabilization, is being employed. “There were some access management issues that the city and residents helped to determine what would work best. A multi-use path also was added to the project due to their input.”

ODOT's traffic plan is simple, with U.S. 42 having narrowed lanes of traffic, as well as lane closures throughout the project corridor as crews continue culvert work and water tie ins, a minimum of at least one lane of traffic will be maintained at all times.

The 2017 work is expected to meet the following benchmarks, including all proposed work on U.S. 42 north of Reagan Parkway to include side streets, commercial drives, sidewalks and restoration

“The proposed existing utility relocations were running behind schedule creating a situation where the proposed sequence of construction and phasing would no longer work,” said Project Manager Don Holmok. “In the spirit of partnering the ODOT Area Engineer Eric Calvert and the ODOT Project Engineer Scott Turchek sat down with the DSE General Superintendent Dennis Grippi and myself, and literally re-sequenced and re-phased the entire project. The proposed revisions were then given to the design engineer, Euthenics, for formal revisions. During this time ODOT and DSE were able to keep the project moving forward in a joint effort with the goal of meeting the original proposed completion date.”

“When we started the project we were told that the communication lines [phone andcable tv] have not been relocated to the new power poles,” said Grippi. “We were faced with a six months to a one-year delay on the project. Working closely with ODOT we were able to totally change the sequence of construction. The original sequence of construction was to start on the far southeast end of the project, and proceed north starting with the installation the water line and proceeding with the storm sewer utilizing half-width construction. Meaning, stopping at the construction centerline of the roadway. We brought in four sewer and water line crews and installed 65 percent of the underground work over the winter.”

The work is taking place in a tight space.

“The key to working in a business district like this is having a good traffic safety supervisor — we have several and they are supported with proper equipment and signage, good responsible crews and the patience from the motoring public,” said Grippi. “Every day we have five to six different traffic zones set up. We generally have one crew installing waterline and three crews installing storm sewer. We also have two concrete crews working on temporary pavement and trench repairs.”

Due to the problem with the existing utility relocations, DSE is working in multiple temporary zones so as to keep the project moving forward.

A dump site and staging area on U.S. 42 was established about a quarter-mi. north of the project, along with a field office.

“That's always one of the toughest things about building a project of this nature,” said Grippi. “We leased a three-acre site for the purpose of storing material, our office trailer, and tool trailers. We generally utilize the right-of-ways as much is possible to store pipe and other materials.”

Residents are helping out in terms of following the traffic management plan.

“Fortunately the local residents know that there are a number of ways around the actual construction and are doing a very good job of avoiding the area whenever possible,” said Holmok.

Grippi said, “The residents and businesses have been great. One thing I've learned from past projects is to give the motoring public plenty of advanced warning letting them know what entrances are open or closed. keeping them channelized into specific lanes this way nobody gets in trouble.”

On a project like this, communication with ODOT and the city are crucial and DSE is taking every measure possible to alert everyone about changes to the work plan, problems that arise, and lane closures.

“This project is set up to have a paid Facilitated Partner program along with a paid Dispute Resolution Advisor,” said Holmok. “ODOT District 3 has an exceptionally talented person organizing these two programs in Beth Wilson. Beth has done an amazing job at putting together two partnering meetings with DSE, ODOT and the local Municipal Authorities, and one meeting with the local businesses.

“As in any underground utility project, we have found existing utilities in conflict with proposed utilities. The ODOT project engineer and Grippi are in immediate communication and deal with each situation promptly. Due to the number of properties involved in a project this size, not all property owners had settled with the state before construction began. The ODOT personnel, Mike Weaver, Eric Calvert and Scott Turchek are doing an excellent job of keeping us in the loop as the various settlements are made and the plan changes that were agreed upon.”

“All of the concrete removed was taken to Osborne Medina and they are crushing it for recycled 304,” said Holmok. “The asphalt grindings are being taken to another project to be used as a temporary parking lot. In order to stay competitive, we are constantly in negotiations with our concrete, asphalt and aggregate suppliers. Our dispatcher Don Woody does an excellent job of locating dump sites either for permanent disposal and or for future use.”

“Due to the unusually mild winter we have been able to work through the winter months installing water mains and storm sewers,” said Holmok. “We have only missed a couple of days when it either was raining too much or snowed too much. All of our subcontractors are local companies that we have used on previous projects. Our onsite Superintendent Mike Smith has worked with the same group of people over the years and on many different projects.”

DSE is using mostly Komatsu equipment, which is purchased from Columbus Equipment in Richfield through the company's sales representative, Mike Swan. This project is 16 mi. from DSE's closest yard/shop. The crews are using Komatsu 600, 490, 360, 300 and 200 excavators; a Komatsu 270 and 320 rubber tire loader; and a Takeuchi 95 excavator.

“Our on-the-road mechanics take care of most repairs on site,” said Holmok. “Our fuel truck drivers not only fuel, but perform routine maintenance on a daily basis. We have duplicate pieces of equipment so when a major overhaul is necessary we are able to switch out equipment and bring back to our shop where we perform all major repairs in house.

DSE also purchases equipment and vehicles from dealerships such as Gibson Machinery LLC of Oakwood Village and Ohio CAT in Broadview Heights. CEG