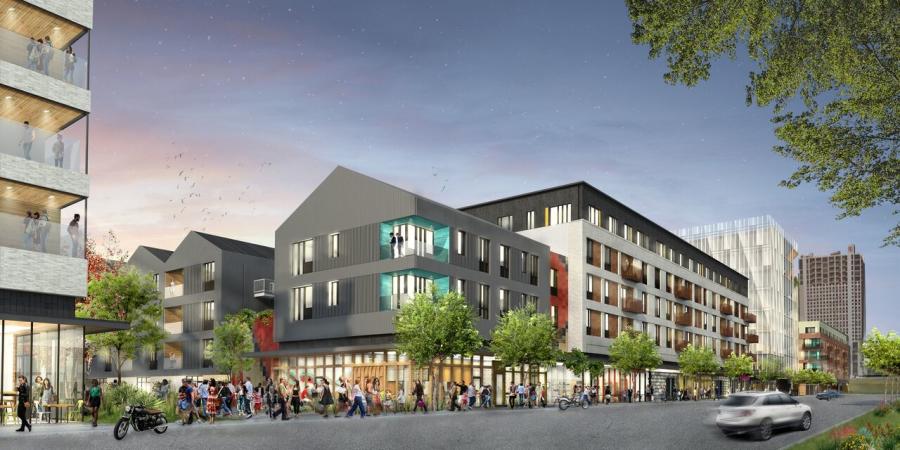 Capital Metro and the Endeavor Real Estate Group/Columbus Realty Partners team hosted a groundbreaking ceremony on June 28 at the Plaza Saltillo MetroRail Station in East Austin to celebrate the commencement of construction on the Plaza Saltillo District. The event featured a flag-planting ceremony, remarks by community members and local officials, music and refreshments.

The Plaza Saltillo District is a transit-oriented development (TOD) on 10 acres that will transform an abandoned brownfield site that once held the city's train depot into a significant, mixed-use multimodal community just east of downtown Austin. The community will feature apartments, office space, retail outlets, open space and public art.

When completed, the Plaza Saltillo District will be served by a range of transportation options, including MetroRail, MetroBus, Car2Go, pedestrian paseos, Austin B-cycle and an extension of the Lance Armstrong Bikeway from downtown Austin.

Endeavor is extending the Lance Armstrong Bikeway from under I-35 at 4th Street to Plaza Saltillo and including pedestrian/bike-only paseos that will allow neighbors from the north and south to conveniently pass through the property. Reserved Car2Go parking will be provided along with public parking in below-ground facilities, and San Marcos Street will be extended as part of the project.

“The Plaza Saltillo District is the realization of a shared vision of literally hundreds of talented and dedicated people, and reflects more than 20 years of input from surrounding neighborhoods, businesses, elected leaders and community stakeholders,” said Linda Watson, Capital Metro's president/CEO. “We are very grateful for all of their efforts in the creation of this future vibrant and transit-rich neighborhood that will help address two of the region's biggest problems — mobility and affordability.”

The groundbreaking ceremony took place on June 28. Leaders from Capital Metro, Endeavor Real Estate Group/Columbus Realty Partners, the city of Austin and the East Austin neighborhood planted flags on the site just east of Plaza Saltillo to kick off construction.

“A primary goal of this project is to increase ridership on Capital Metro services — not just for the agency's benefit, but because successful public transit serves the whole region,” said Sabino “Pio” Renteria, a member of both the Capital Metro board of directors and the Austin City Council. “With more than 1,700 people living and working there, the Plaza Saltillo District will be able to do just that.”

To accommodate the new development without disrupting MetroRail service, Capital Metro has realigned the rail tracks between Downtown Station and Plaza Saltillo, moving them from their former location in the center of the property to its southern edge along 4th Street.

Remediation work has already begun on parts of the site, and preparation for construction on the below-grade parking structure that will support the office building will begin this summer. Endeavor anticipates the process will take approximately 30 months.

Earlier this year, the City Council approved zoning that included a four-story office building but granted Endeavor an option to increase the height of the office building to eight stories provided additional contributions were made toward enhancing affordability in the surrounding neighborhood.

In April, the Capital Metro board unanimously approved an amendment to the ground lease that incentivized Endeavor to move forward with the development of the larger building. With this density, the Plaza Saltillo project will allow Capital Metro to fund more transit service across its network, fund more affordable housing, and generate revenue for its regional partners, including the city of Austin, AISD and Travis County.

“We are excited to start construction on this important transit- and community-oriented project where people will live, work, shop and be entertained,” said Jason Thumlert, a principal with Endeavor Real Estate Group. “Plaza Saltillo will connect East Austin with downtown and bring even more vibrancy to East Austin while enhancing the local flavor of that community. The project will emphasize local jobs, local design, local artists and local retail — all in a pedestrian-friendly atmosphere. We're honored to work with Capital Metro and all stakeholders to make this vision a reality.”

The Plaza Saltillo development will consist of:

• 11 total acres, 10 of which are to be redeveloped. (The 1 acre that contains Plaza Saltillo and the MetroRail station will not be under construction but are considered part of the district).

• Six continuous city blocks from I-35 to Onion Street, between 4th and 5th streets.

• 140,000 sq. ft. of office space, primarily in an eight-story office tower at I-35 that includes retail on the first floor.

• Works created by local artists, including tiles created in the style of Austin's sister city of Saltillo, Coahuila, Mexico.