The complex and additional developments it is expected to inspire will dramatically change the face of Bettendorf and drive more growth along the I-80 and Middle Road corridor. 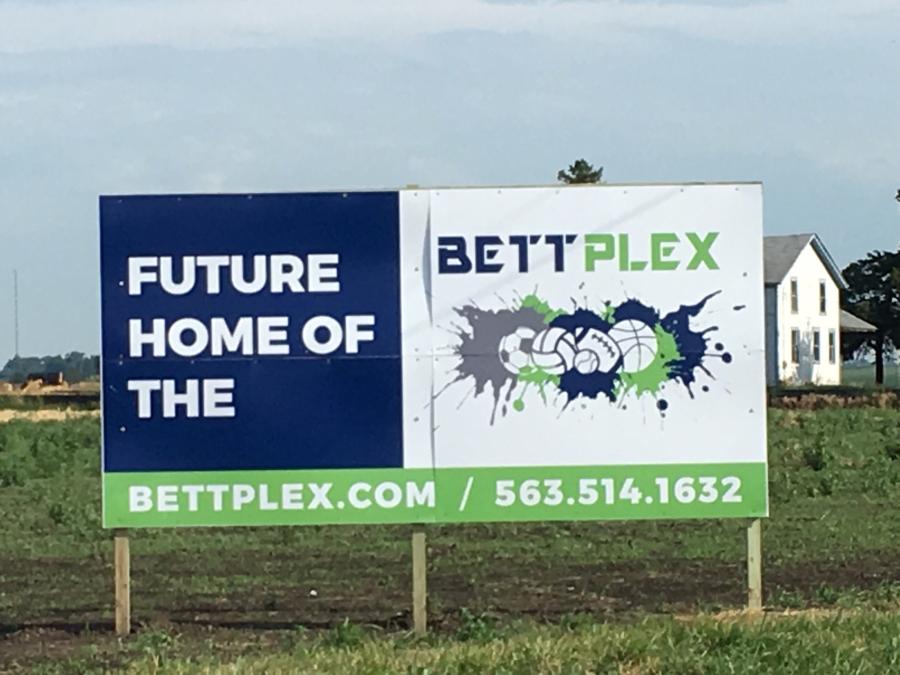 Construction has begun on the $57 million BettPlex, a 78-acre, indoor and outdoor sports center, in Bettendorf, Iowa.

More than one person has sputtered words to that effect after spotting the steel framework that is rising from last year's farm field at Forest Grove and Middle roads in Bettendorf, Iowa, just south of Interstate 80.

They are looking at the beginnings of the $57 million BettPlex, a 78-acre, indoor and outdoor sports center.

The complex also will have an entertainment center, and the development agreement calls for at least one hotel to accommodate the 2,000 to 3,000 visitors expected during at least 42 weekends of the year. The complex and additional developments it is expected to inspire will dramatically change the face of Bettendorf and drive more growth along the I-80 and Middle Road corridor.

"It's huge for us," Bettendorf 3rd Ward Alderman Debe LaMar told the Quad-City Times . "It's like Christmas."

A study done in 2014 by San Francisco-based Gruen Gruen + Associates pegged the potential for Bettendorf's population growth by the year 2035 at 7,875, bringing the city's total population to 43,000.

The increase would require 1,520 acres for new housing units, commercial development (office, warehouse, retail) and additional needs, such as parks, churches, schools and other public buildings.

With 5,000 acres of available land, the city is in good shape on that count. Even so, the council is considering annexation to the north, east and west.

City staff has been talking with counterparts in Scott County, Davenport and LeClaire, and City Administrator Decker Ploehn said he expects to report back to aldermen in the spring on "all the options — what we can and can't annex, whether voluntary or involuntary."

The current thought is that annexation could go north to Territorial Road, west to meet up with Davenport (there is an area north of Interstate 80 where the boundary lines between Davenport and Bettendorf diverge, with Scott County land in between) and east to LeClaire, Ploehn said.

At present, there is no north-south road marking LeClaire's western boundary. Ploehn said it is likely the boundary would be set along a ridge, where sewer would naturally flow west to Bettendorf and east to LeClaire.

Change can be found in every direction.

About 5 1/2 miles southwest of the rising BettPlex is Bettendorf's downtown riverfront. Near its banks, two elevator shafts and several walls are appearing where the Twin Bridges Motor Inn previously stood. A 132-unit apartment complex is being built there — just a block west of City Hall.

The area changed radically in recent years as 42 properties were purchased by the Iowa Department of Transportation, then demolished to clear the way for construction of the new Interstate 74 bridge. Tons of concrete were poured for widened and re-routed roadways and ramps, and a couple of new gasoline stations have been added to replace the ones that were lost.

But that will change. Bettendorf intends to reinvent its downtown by seeing the addition of housing, shops and other businesses.

A top priority established in recent city goal-setting sessions is to "get some control of riverfront land," either through outright acquisition or by working with a developer for commercial, retail and residential projects that would capture river views, Mayor Robert Gallagher said.

Between the north-south bookends of the BettPlex and the downtown, single-family residential construction hums along at the rate of 140-170 units per year, Gallagher said.

The corners of major intersections are being staked out for their potential.

The city is applying for a grant that would allow it to buy and demolish up to 80 homes in the flood-prone area along Duck Creek, east of Interstate 74.

And within the next year, a "vision" will be developed for a new community recreation complex that would combine the functions and uses of the aging Community Center, Life Fitness Center and Splash Landing.

Any Quad City resident who hasn't driven north of, say, Bettendorf High School in the past few years probably would be struck by the established commercial feel of the intersection of 18th Street and 53rd Avenue.

Further east, the intersection of 53rd and Middle is still up for grabs. The northwest, northeast and southeast corners are for sale by Mel Foster Co. and the southwest is for sale by Genesis Health System.

But directly west and south of the undeveloped Genesis corner, Windmiller Development is transforming 113 acres into a mixed-use area.

"That's a huge endeavor," said Jeff Rieter, the city's economic development director. "One hundred acres is a lot of ground."

Nine commercial buildings, including a Blackhawk Bank and Trust, will front 53rd. A transitional area of townhouses will be built to the south and 143 single-family homes are to go south and east of that, according to Craig Windmiller, founder of Windmiller Development.

The commercial buildings will be red brick with dark windows, and the residential area will be wooded with a lake and pond.

"It will have a feeling of Galena," Windmiller said of the development, referring to the small town in northwest Illinois known for its well-preserved 19th century buildings.

The site incorporates a flexible zoning that is new for Bettendorf, allowing the mixing of uses so that living spaces are within walking distance of services.

"The thing we're doing to make all this work is that we're putting in eight-, 10- and 12-ft. berms with prairie grass and trees to help separate the commercial from the residential and townhomes," Windmiller said.

In terms of commercial development, Bettendorf's 53rd Avenue is not going to look like Davenport's 53rd Street.

While the intersection of 53rd and 18th is commercial, and the Windmiller Development west of Middle Road at 53rd will add commercial, most of 53rd Avenue already is solidly residential and will stay that way.

Homes are built and occupied, many buffered from the sights and sounds of traffic by earthen berms, fences and mature trees.

City sewer and Iowa-American Water lines will be in place to serve the BettPlex when it opens, projected to be the summer of 2018, said Public Works Director Brian Schmidt. The lines also will serve other areas south of Interstate 80 and all along Forest Grove Road to Criswell Street, Schmidt said.

The city has some capacity to serve areas north of Interstate 80, too. For the long-term, though, it expects to install a 48-in. sewer line under the interstate and build a lift station in Forest Grove Park. This would be a huge undertaking with the capacity to serve some 8,000 acres, which is more land than is currently within the city's boundaries, Schmidt said.

The city has a project in its capital improvements budget over the next two years to lay lines, and it is going through the extensive permitting process required to go under an interstate, Schmidt said. Doing this work now will ensure, "In the event that area starts exploding, we are ready," he said.

But to actually make it work, a lift station that is estimated to cost $15 million would have to be built in the area, probably in the city-owned Forest Grove Park, Schmidt said. This project is not funded and has no immediate timetable, he said.

In a related matter, the city has made it a high priority to advocate for the widening of Interstate 80 to six lanes between LeClaire and Iowa City. If accomplished, the configuration of the interchange also would change.

In recent years, Bettendorf has been buying and demolishing flood-prone homes in the area of Duck Creek, east of Interstate 74. It has obtained and put up the money to buy 10, but many more are candidates for a buyout.

The demolition that already has occurred has changed the look of several streets.

Officials recently decided to go ahead with a federal grant application for $14 million, and the city's $3.5 million match would pay for the purchase and demolition of up to 80 homes in the flood-prone area, Ploehn said.

The boundaries of the target area haven't been officially set, but it would be roughly I-74, Spruce Hills Drive, Olympia Drive, possibly dipping down to Parkway Drive, and Middle Road, Ploehn said.

The application is being made to the Federal Emergency Management Agency, via the Iowa Department of Natural Resources, and Ploehn said he expects to hear back sometime in 2018. Damage caused by hurricanes Harvey, Irma and Maria likely will limit the amount of money available, he noted.

A prime piece of real estate on Utica Ridge Road near Spruce Hills Drive has been vacant since the 2016 demolition of the landmark Lodge Hotel and Conference Center, formerly Jumer's Castle Lodge.

It is owned by Russell Construction, and Ploehn said he expects an announcement about a new development over the winter, with groundbreaking in the spring. He expects the development to be "a couple of things," as opposed to one large project.

Hopewell Avenue currently ends in a farm field east of the new Pleasant Valley elementary school of the same name. It will be extended to Criswell Street in 2019.

"That will open up that corridor — Middle Road, Criswell, Forest Grove Road, Hopewell. That's a lot of acreage there," Schmidt said.

The city's Interstate 74 Industrial Park is nearly entirely built out, with construction of the 72-bed Strategic Behavioral Health psychiatric hospital expected to begin in March.

The hospital will be on a 7.75-acre site fronting Tanglefoot, said Mike Garone, the company's director of development.

When Ploehn started with the city's police department in 1975, Tanglefoot Lane pretty much defined the city's northern-most boundary. Everything north of that was farms. Fifty-third Avenue existed, but it was a gravel road.

While the face of Bettendorf certainly has changed since then, its character is much the same, he said: "We're still a residential, family-oriented, walkable, bike-able community, and we're going to continue to be that."