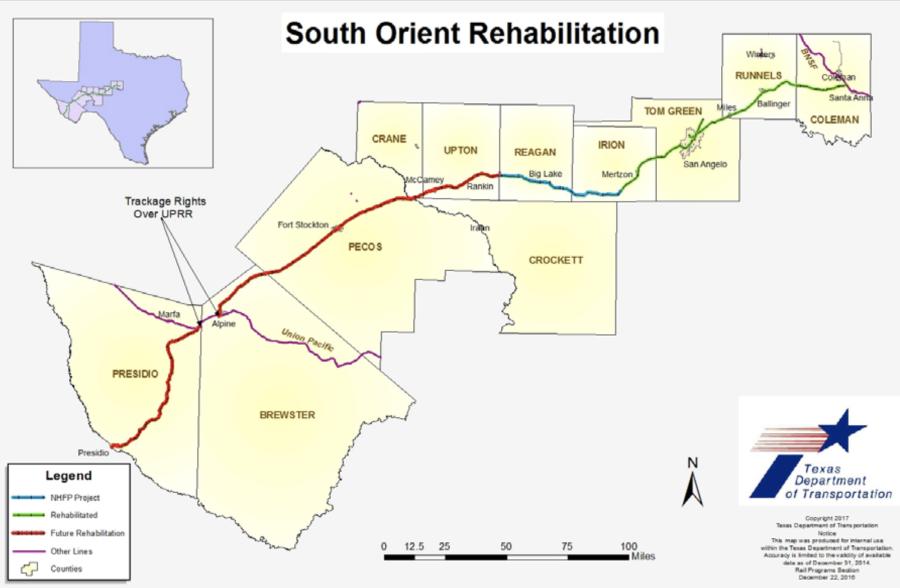 These projects are in addition to a $7 million rehabilitation of 72 mi. of track from the Texas-Mexico border to Alpine funded by a federal FASTLANE grant. Work also is planned to reconstruct the Presidio-Ojinaga International Rail Bridge destroyed by fire in 2008. The bridge, one of five border rail crossings between Texas and Mexico, has remained closed. The $9.2 million cost of construction for the new bridge is being provided by Texas Pacifico Transportation Ltd., operators of the state-owned rail line. Investment in the line comes when yearly carload counts have increased by nearly 300 percent over the past five years and 2017 is expected to be a record year.

Commissioner Lewis called the improvements on the freight line, which supports the agriculture and oil and gas industry in the region, an important investment in the vitality of the West Texas economy. Speaking at the event, he thanked U.S. Sen. John Cornyn, Congressmen Will Hurd of San Antonio and Michael Conaway of Midland, Rep. Darby and other officials for their support in attaining the funds to improve the safety and efficiency of the railroad and reconstruct the bridge.

“Rebuilding the South Orient Rail Line will restore a critical corridor of trade between Texas and our state's strongest trade partner,” said Sen. Cornyn. “I'm proud to have worked with TxDOT, USDOT and my colleagues in Congress to help strengthen cross-border commerce and improve the flow of legitimate trade with Mexico.”

“Cross-border trade is the lifeblood of many areas in my district,” said Hurd, who represents more than 800 miles of border, more than any other member of Congress. “I'm proud to have worked with TxDOT to secure funding for the South Orient Rail Line, so that this vital corridor can remain a pillar of Texas trade, benefitting the border region, West Texas and our State's economy.”

“The improvements that are being made to the rail line and the reconstruction of the rail bridge will provide future support for the communities and industries in Texas that rely on deliveries provided by the South Orient Railroad,” Commissioner Lewis said.

The South Orient Rail Line runs 391 mi. from the Texas-Mexico border at Presidio through San Angelo to just south of Coleman. The line is owned by the state of Texas but maintained and operated by Texas Pacifico Transportation Ltd. under a lease with TxDOT.