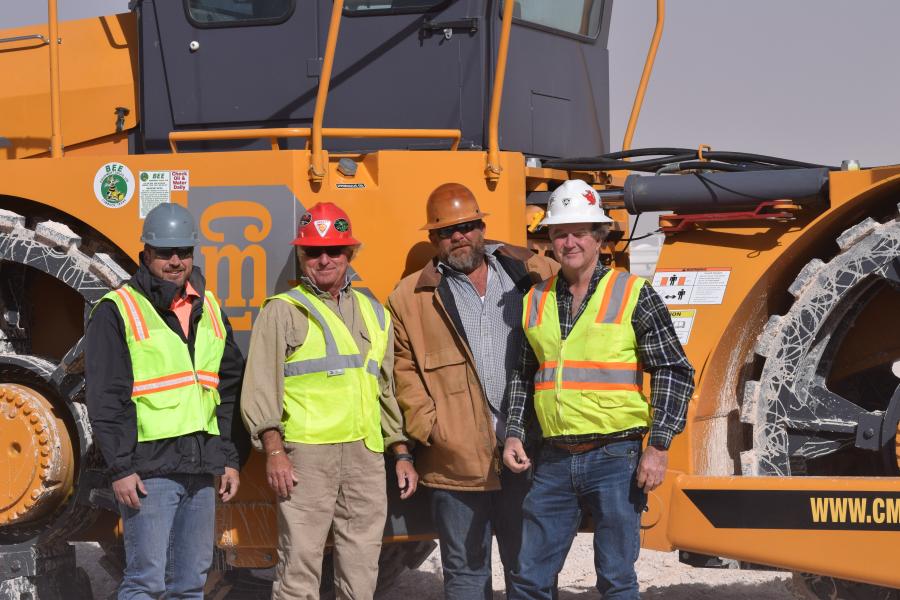 There's the old work cliché when somebody asks their boss, "when do you need this by?" and the answer is "I need it yesterday."

Time constraints and deadline are facts of work life and the construction industry is no different.

Sweatt Construction of Artesia, N.M., recently completed work on a 96-acre site near Loving, N.M., that will eventually be home to an XTO Energy (a division of Exxon Mobil) refinery, energy compressor station and cryogenic plant. 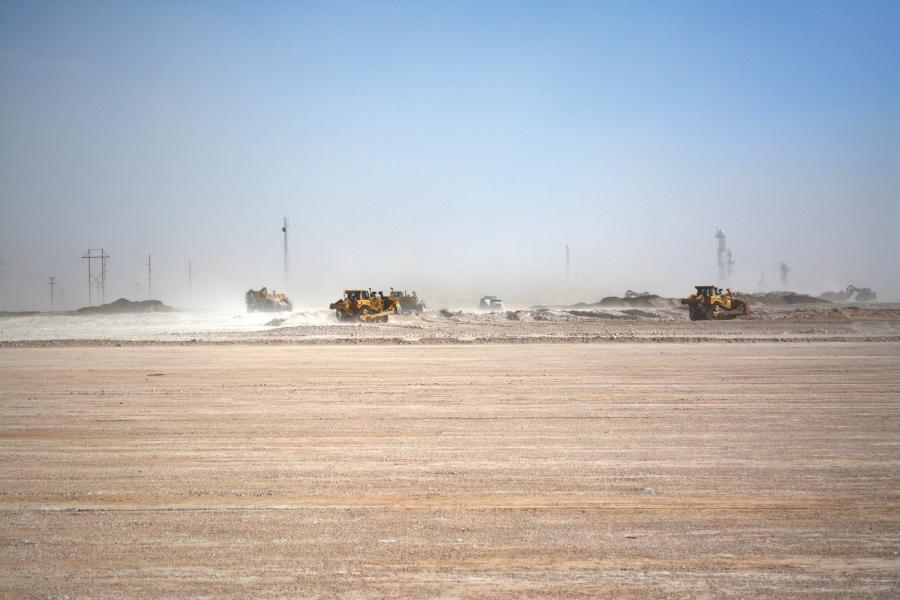 Weather also was a challenge as it can be in the desert. Here, a dust storm blows in during work on the project.

Sweatt was contracted to perform all of the dirt construction and site work for the project, as well as general maintenance of the facility during the construction phase. The job called for removing a top level of sand to expose the native caliche rock, which would ultimately be crushed and compacted to form the pad for construction of the entire site, which is expected to take three to five years.

Doug Fortner, Sweatt's senior estimator, said there were some unique challenges in the project, some expected — and some unforeseen.

"We were going to crush on site, but there was so much yardage that we would have had to do an incredible amount of trucking," Fortner said. "And then … the customer presented us with some additional time constraints, and we knew we could not meet their deadlines crushing with conventional methods. We needed to crush and then compact, and time was going to be a factor."

The plans called for removing 6 to 10 ft. of caliche and then laying it back down in 8-in. loose lifts. 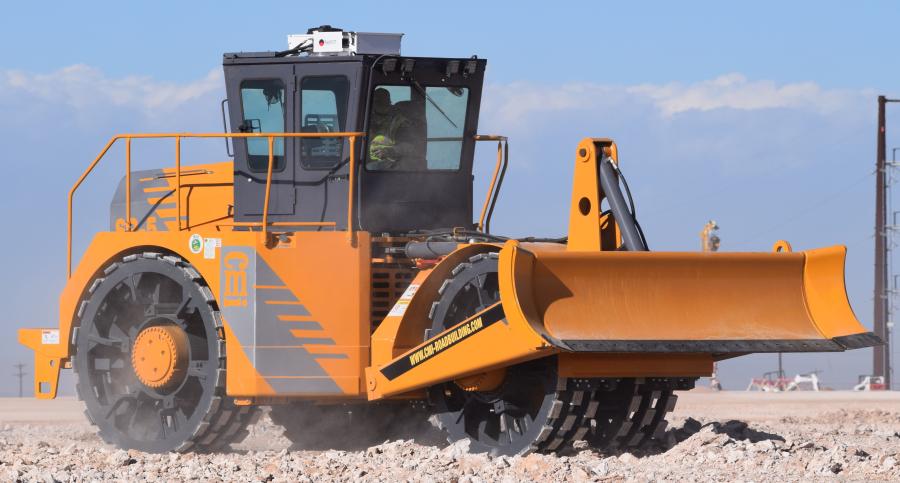 Fortner remembered using a CMI Rexpactor nearly 40 years earlier in a similar application. It worked well then and speculated that it would save both time and money now compared to bringing in a crushing plant.

"We had done the site next to this and so we knew what the rock (caliche) would be, and knew it was ‘soft' enough to use the Rexpactor to both crush and compact," he said. "We hadn't heard much about CMI over the last few years, but were told by Mike Kuehn, our representative at Bee Equipment, that the company was making a ‘comeback' of sorts."

Fortner suggested the idea to Jimmy Carrell, Sweatt's superintendent on the job.

They agreed that the Rexpactor would save time by eliminating the need to handle the 350,000 yds. of dirt and rock four times, as they would have to do with a traditional crusher. In addition, because the Rexpactor compacts from the bottom up, they could do the water processing while compacting, saving even more time.

The plan would call for dozers with ripper attachments to tear thru the caliche, after which dozers equipped with grade control technology would "shape" the ground. Finally, the Rexpactor would crush and compact the caliche in place. 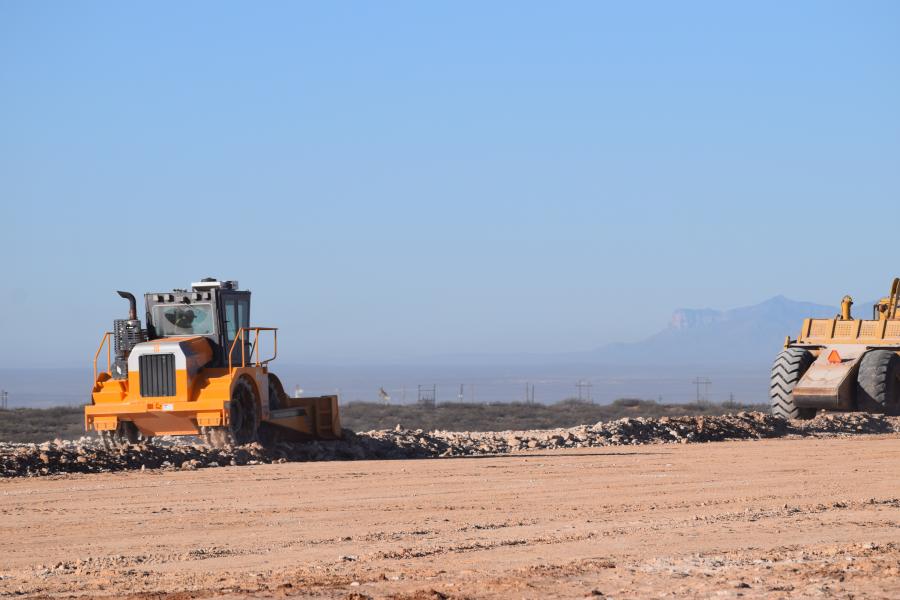 The Rexpactor takes the first run over the caliche after it is laid back down. (Jose H Madrid Jr. photo)

Once Sweatt received buy-in from XTO on the process, they contacted Bee Equipment and arranged for the purchase of two Rexpactor SP3s.

Carrell confessed to being nervous, even skeptical, at first.

"But when we didn't run the Rexpactor for a day, our density pass rates fell off significantly," he said. "This wound up being the difference between success and failure on this job."

Using the SP3 (and an SP5 that was added later), Sweatt was able to attain a 98-percent density passing rate.

"The Rexpactors absolutely expedited the processing of soil to get the necessary density and gradation," Carrell said. "Using the compactors, we were able to take caliche across the undesirable areas, solidify and decrease the moisture content."

Carrell also said they got a big assist from Bee Equipment. 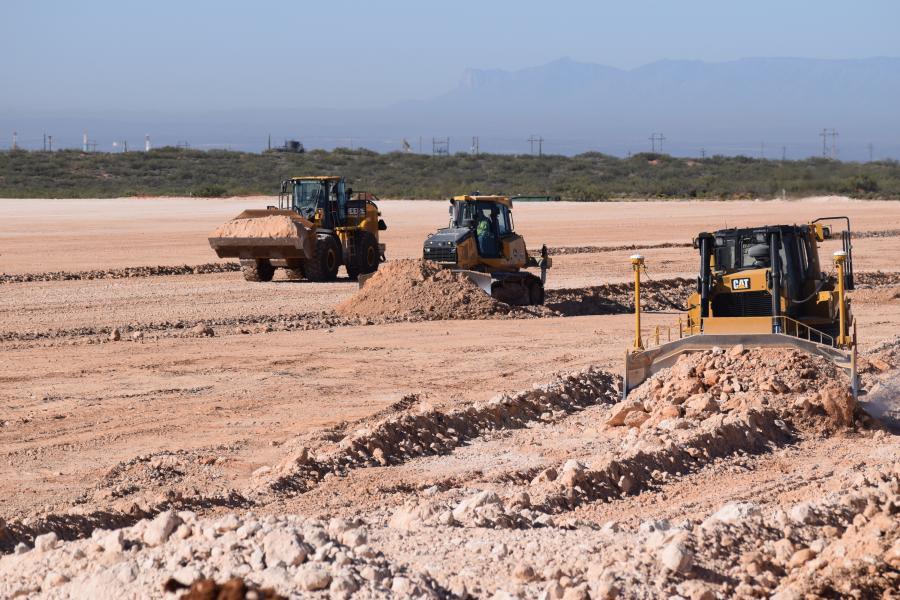 Crews remove the 6 ft. or so of caliche so that it can be laid back down in 6-in lifts. (Jose H Madrid Jr. photo)

"Mike [Kuehn] and his team in Lubbock are awesome," he said. "They are attentive and punctual regardless of the hour. Our needs are important to them. We like that. Even beyond the CMI products, if I need anything that isn't in their inventory, they'll get it for me. They are all about service and training, and we got both when we needed it."

Merging older and newer technology by going with Rexpactor led to a best-of-both-worlds situation for Sweatt Construction.

"We take the proven older technology and incorporate it into new technology," Carrell said. "We make a lot happen out here by finding harmony in all kinds of technology. We marry them all together."

And it worked very well for Sweatt Construction having completed the job ahead of time and on budget … just as their boss, rather, their customer, requested.

Based in Artesia, N.M., Sweatt Construction is an excavating and grading contractor that also works in the oilfield and performs commercial site work.

The company's fleet consists of 200 pieces of machinery, including 20 dozers, 10 motorgraders, 20 loaders and 12 compactors.

Brad Larsen is co-owner and president of the company, which is 30-percent employee owned.

Sweatt Construction currently employs 125 and its projects range in size from $1 million to $8 million.