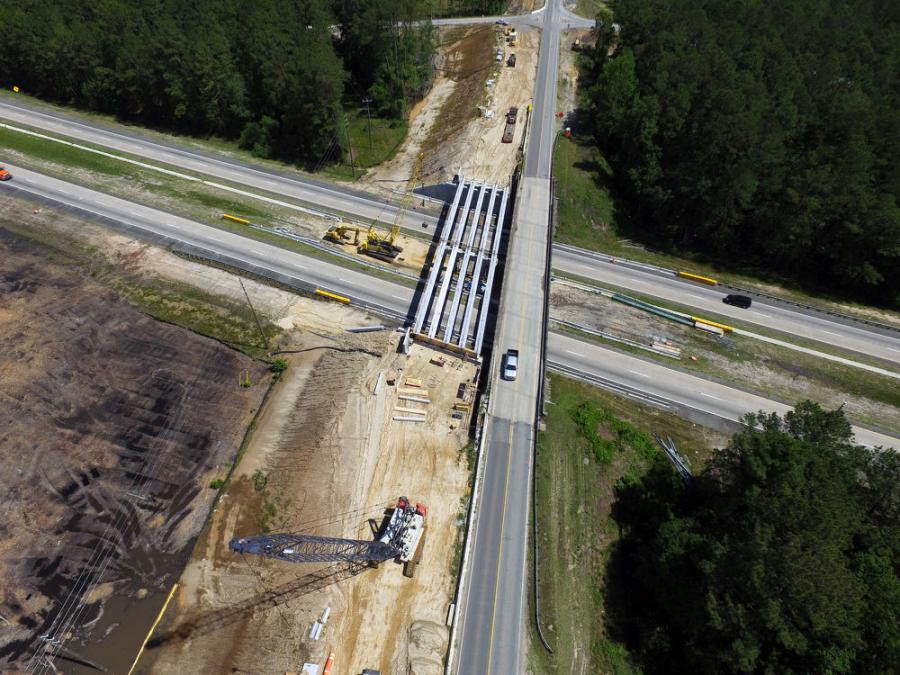 McLendon Enterprises Inc. is the general contractor tasked with replacing a two-lane, 215-ft. long concrete overpass, built in 1960, with a 186-ft., five-lane bridge that spans four mainline lanes of I-16.

The initiative is replacing a two-lane, 215-ft. long concrete overpass (built in 1960) with a 186-ft., five-lane bridge that spans four mainline lanes of I-16 and intro/exit ramps on each side of the diamond interchange. The new structure has two lanes in each direction and a turn lane in the middle with a 4-ft. raised median. 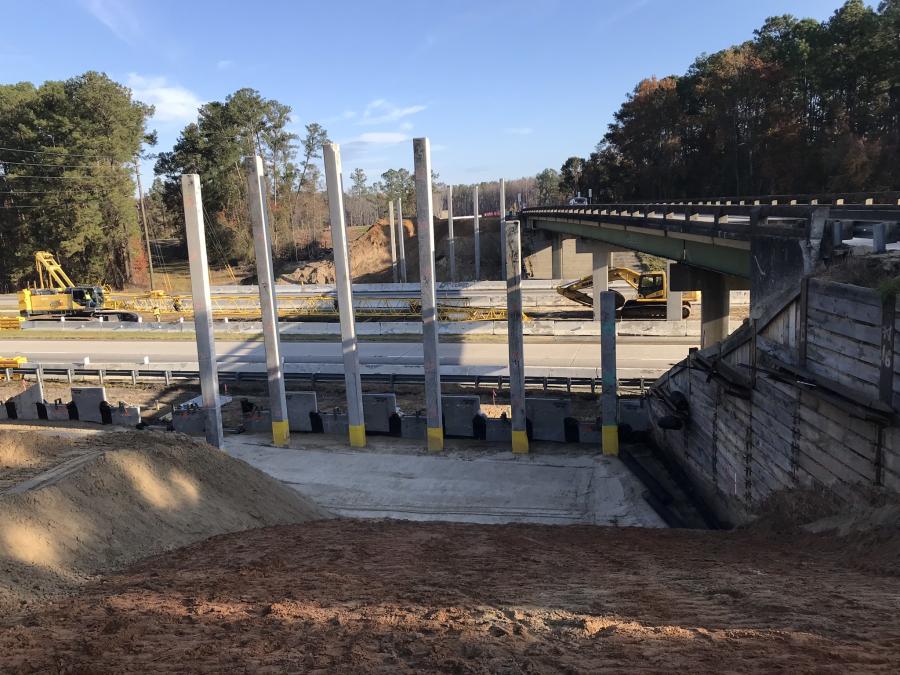 According to reports, "advancing the widening and other upgrades at I-16/Old River Road will improve safety for car and truck traffic and will also enhance the attractiveness of the area to new commercial opportunities."

The project, which started in December of 2018 and should be completed in 2021, is being undertaken to handle increased traffic flow due economic expansion in the area — the construction of warehouses and commercial buildings — based on the phenomenal growth of the Port of Savannah, which is experiencing increased volumes of goods passing through it. The port is expanding in size and constructing new facilities will be able to handle the growing number of ships utilizing its facilities.

The overpass — 20 mi. from the port — carried a fair amount of commuter and truck traffic prior to the reconstruction.

"During the demo of the existing bridge, boards were mounted underneath the deck to keep small pieces of debris from falling to ground," said Matthew Betsill, McLendon's project manager." Crews used concrete floor saws to cut the deck into sections that could be lifted out with a crane. We utilized daytime lane closures on I-16 to work our way across the bridge one lane at a time. After the deck was removed, we performed traffic paces at night on I-16 to remove the existing steel beams.

"Police officers slowed traffic of I-16 enough to allow for about a 10 to 15 minute gap," he added. "Crews used that gap to lift each beam out of the way. With the beams off the existing columns, they could be taken down with jack hammers attachments mounted to an excavator. All of the debris was loaded onto trucks and hauled off-site."

The traffic management plan is based on lane closures as the work proceeds. During the overpass reconstruction, one lane was demolished while traffic flowed on the other side. Lanes were also closed for the work on the roads and ramps. 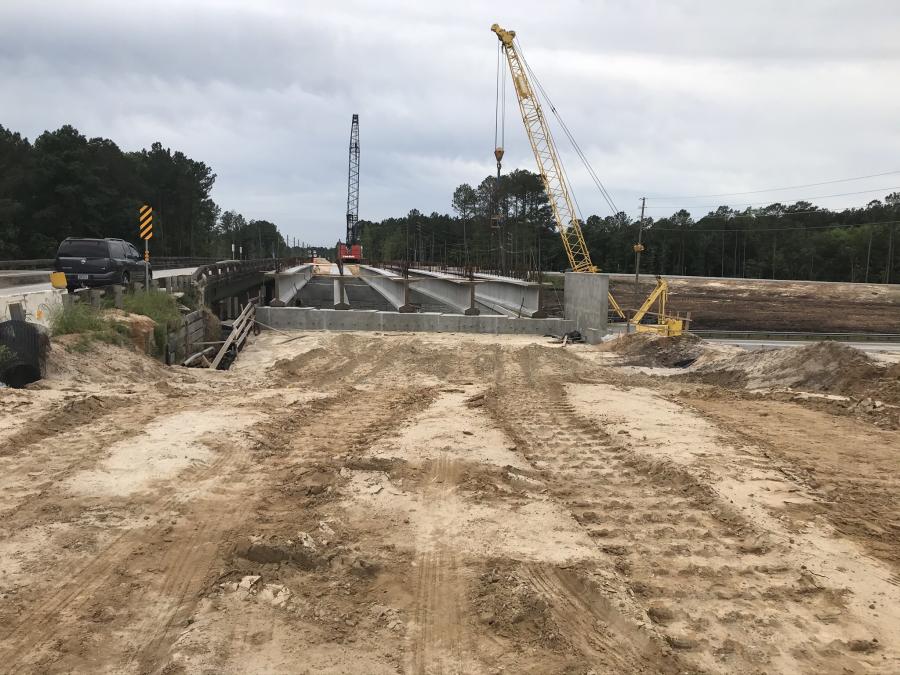 To date, McLendon Enterprises has completed the Stage 1 bridge construction, MSE walls 1 through 4 and Stage 1 roadway including new storm drainage systems. The completed Stage 2 bridge work includes the piles, columns and caps, beams and bridge deck. The remaining items consist of Stage 2 bridge approaches, traffic barrier over the bridge and the median. The remaining Stage 2 roadway work consists of GABC base, curb and gutter, median and asphalt paving.

"Utility conflicts were addressed with the GDOT utility relocation plan," said Betsill. "Georgia Power relocated an overhead line crossing I-16 parallel to Old River Road. This project was almost entirely a day shift project, with night work reserved for setting and removing beams over I-16. I would describe the relationship with GDOT as ‘active'. We work together to complete this project. We are in constant communication about the needs of the project and any questions each of us have."

The eastbound and westbound sides of the bridge were demolished within the same timeframe.

"We didn't close I-16 to traffic," said Betsill. "We used nighttime traffic paces to slow traffic to remove each beam — four paces each night for two consecutive nights on Nov 9 and Nov 10 [2020]."

Remediation Resources Inc., of Pembroke Ga., performed the demolition of the existing bridge using floor saws, an excavator and a crane.

"The bridge was removed piece by piece," said Betsill. "After the demo, the pieces were loaded onto trucks and removed from the site."

The road construction is ongoing.

"Southeastern Site is finishing the Stage 2 bridge construction," said Betsill. "When completed, McLendon will build and pave the road to tie into the new bridge. We will then shift traffic to Stage 3 which will divide traffic into two lanes over then new bridge. We will complete the median throughout the whole project. Lastly, finishing up the project with the final 1.5-inch layer of asphalt, new striping and signage. " 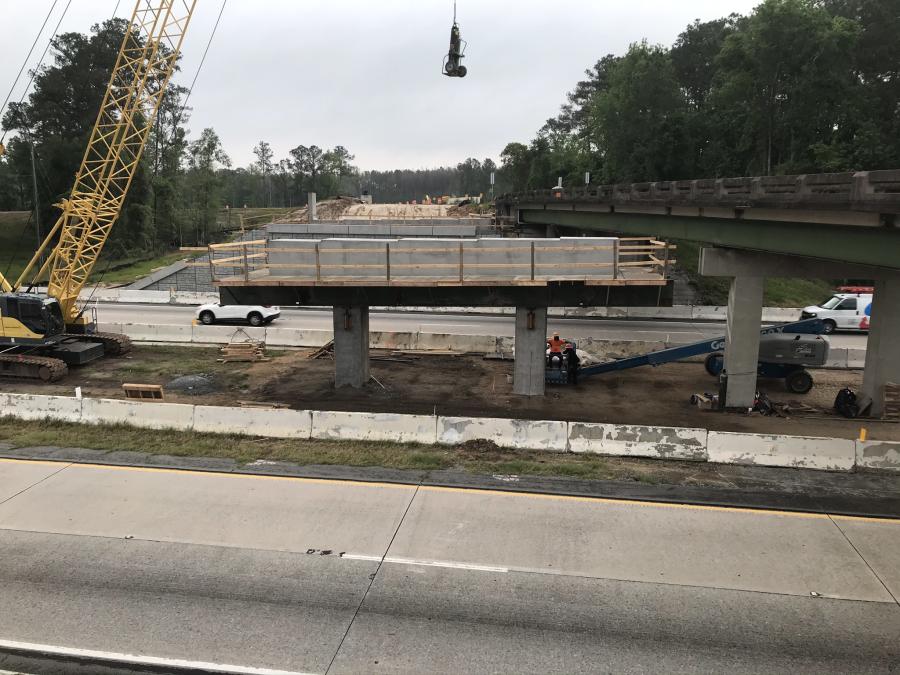 KRM South is supplying 600 cu. yds. of concrete for the project.

The totals for the materials garnered from the demolition and excavation activities have not been finalized yet.

"The earthen materials generated on site are reused as general fill under slopes on the approach to the bridge," said Betsill. "Milled asphalt is taken back to our asphalt plant to be reused in asphalt production. Demolished concrete is taken to a rock yard to be crushed and reused as base material. Bridge beams are reused by GDOT or the bridge contractor as pile templates."

"We have several full-time mechanics that maintain and repair our equipment as needed," said Betsill. "We use several rental companies around the Vidalia area when specific equipment is needed."