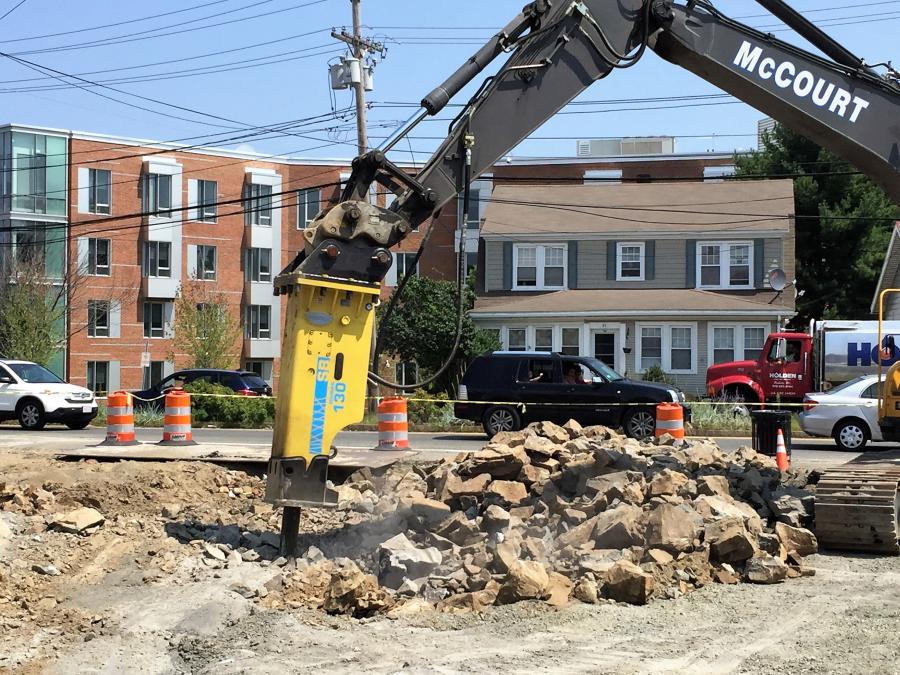 The northeast is known for its hard rock conditions and Boston is no exception.

McCourt Construction Company, headquartered in Boston, has been building America since 1893. This 120-year-old construction firm, which has been intricately involved in the growth of eastern Massachusetts as well as projects around the world, has a unique advantage: as one of the oldest construction firms in New England, there is almost no situation that it has not seen and dealt with. McCourt prides itself in the expertise that its leadership team, which has an average tenure of 27 years, brings to the table.

Jobs that McCourt Construction is involved in this year are complicated by the excavation of very hard rock. Nearly all materials at the site need to be broken using hydraulic hammers and rippers.

James Hall, the McCourt Construction equipment manager, with some encouragement from Carlos Monte, equipment supervisor, made the decision to purchase new hydraulic hammers for their Volvo 305 excavator and their Komatsu PC138 — the Volvo 305 was outfitted with a Soosan SB130 8,500 ft. lb. hammer and the Komatsu PC138 was equipped with a Soosan SB60 3,000 ft. lb. hammer. In each case, the excavators were equipped with a quick coupling system.

“We purchased these hammers through David Serra at D & D Equipment Repair. We did our due diligence and we felt that the Soosan hammers would give us the best bang for our buck,” Hall said. “We did price comparisons and the Soosan offered a pricing advantage, but the biggest advantage was that David Serra came with the hammers. D & D Equipment Repair and David have been doing field service repairs on our fleet for the last six years and he has delivered on time reliable support in parts of Boston that are nearly impossible to get to every time.”

D & D Equipment Repair is now the Soosan hammer sales and service representative of eastern Massachusetts. “I started this business realizing that contractors were keeping machines in their fleet longer than ever before and a large demand for reliable, independent, onsite service and repair was growing in the Boston area,” Serra said.

“I have been rebuilding hammers for a very long time and am familiar with the various types and designs of hammers that are on the market. I am very impressed with the Soosan hammers and feel confident that it is a hammer that I can recommend to my customer base. The hammers are shock mounted in a case that provides stronger shock absorption, which extends the life of the hammer and reduces operating noise, which is particularly important when working in a confined space.”

McCourt Construction's Monte has been satisfied with the Soosan performance.

“At times we run these hammers around the clock and they have completely lived up to our expectations. We knew that David would be capable of supporting these hammers and a testament as to how well these hammers are built is the fact that under extreme conditions they have maintained a reliable track record.”

McCourt Construction has a massive fleet of construction equipment, most of which it owns, and is made up from a representation of a wide variety of manufacturers, including Caterpillar, Volvo and Komatsu.