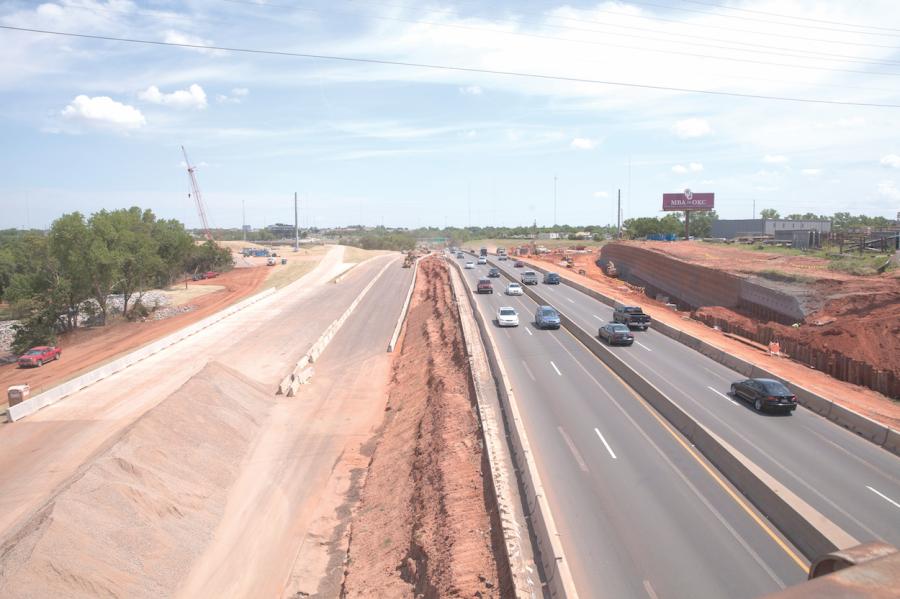 Construction continues on the Oklahoma Department of Transportation’s largest single contract, widening of I-235 near I-44 in Oklahoma City. At their June 5 meeting, members of the Oklahoma Transportation Commission received an update on the work, which included a multi-day closure of the interstate.

Highlights of the Oklahoma Transportation Commission's June 5 meeting include a report on the impact of the recently-approved Fiscal Year 2018 state budget on highway projects and approval of several contracts that were deferred in May due to state funding concerns. Commissioners also awarded contracts for projects on U.S.-75 in Tulsa County, SH-20 and SH-99 in Osage County and local government projects in the Oklahoma City metro area.

Mike Patterson, Oklahoma Department of Transportation executive director, reported to the commission on the outcome of the legislative session and the FY 2018 state budget agreement. State funding for highways and bridges was reduced by $153 million and funding for weigh station construction and maintenance was cut by $3 million.

Since the state budget preserved most of ODOT's allocation of income tax revenue for the next fiscal year, no current construction is in danger of being halted and all previously suspended projects have now resumed. Patterson also noted that the budget preserves state funding for continued passenger rail service on the Heartland Flyer and matching funds for rural public transit. However, these cuts combined with several years of funding reductions will impact future construction projects scheduled in the department's eight-year construction work plan, with some projects possibly being removed when the plan is rebalanced in the fall.

The commission and director also recognized the good work of contractors on the state's largest project, the ongoing reconstruction and widening of I-235 near I-44 in Oklahoma City. During a scheduled five-day closure of the interstate near I-44, crews worked around the clock and were able to reopen I-235 to traffic nearly two full days early. Work on this phase of reconstruction of the I-235 and I-44 interchange is expected to be completed by 2020.

Commissioners voted to approve contracts they had deferred in May due to state funding concerns, including bridge repairs on Shields Blvd. over I-35 in Moore and I-35 over U.S.-77 near Davis, as well as pavement rehabilitation on SH-11, SH-45 and SH-132 in Garfield and Grant counties. They awarded contracts for cable barrier installation on U.S.-75 in Tulsa and Glenpool and school zone safety improvements at the intersection of SH-20 and SH-99 in Hominy. Also approved were contracts for local projects including reconstruction of nearly two miles of MacArthur Blvd. in northwest Oklahoma County, a multiuse trail along S.E. 29th St. in Midwest City and a Main St. streetscape in Norman.

Commissioners voted to award 23 contracts totaling more than $32 million to improve highways, roads and bridges in 18 counties. Contracts were awarded for projects in Carter, Cleveland, Custer, Kiowa, Logan, Garfield, McClain, McCurtain, Murray, Oklahoma, Okmulgee, Osage, Pittsburg, Pontotoc, Pushmataha, Tulsa, Washington and Woods counties. A list of all awarded contracts may be found by visiting www.odot.org/contracts, selecting the May 2017 letting and clicking Go and then Award.

The eight-member panel, appointed by the governor to oversee the state's transportation development, awards project contracts for road and bridge construction every month. Due to the Independence Day holiday, the next meeting is scheduled for 11 a.m. Wednesday, July 5.