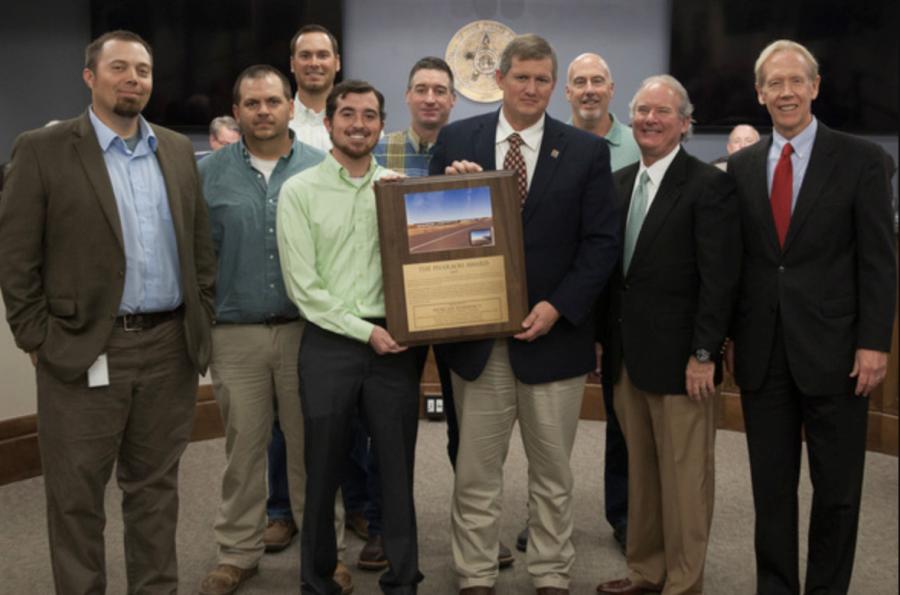 The Commission voted to award a contract for an up to $27 million project to construct the two remaining core sections of the Oklahoma City Blvd. in downtown Oklahoma City. This work will complete the new downtown city street, which will connect to the realigned I-40 Crosstown.

Also awarded was a contract for an up to $22 million project for reconstruction and widening of SH-74 (Portland Ave.) to four lanes from north of N.W. 164th Street to N.W. 206th Street (Covell Road) in northwest Oklahoma City. This final phase will complete expansion of the corridor between Memorial Road and Waterloo Road in the rapidly-developing area of the city. Both projects are expected to begin in spring 2018 and include financial incentives for early completion of the work.

Mike Patterson, ODOT executive director noted that the County Improvements for Roads and Bridges fund was cut considerably in the recent regular and special sessions of the state legislature. The CIRB program uses dedicated state funding for major local road and bridge projects selected by the counties and their Circuit Engineering Districts and is administered by ODOT. These cuts are expected to impact the projects in the five-year CIRB plan which was recently adopted by the commission.

“The CIRB program has been very successful in allowing counties to address major road and bridge needs since its inception in 2006,” Patterson said. “The continued funding reductions to ODOT and county funds is something we should all be concerned about as we strive to make transportation a priority for the state.”

Patterson also shared that the Association of Oklahoma General Contractors recently honored an ODOT project in Duncan as the state's best bridge project in the past year. He presented the Pharaoh Award to the commission, along with members of ODOT's Duncan Residency and the construction contractor, Overland Corporation of Ardmore.

The $15.6 million project was part of an ongoing effort to provide a south connection for the Duncan Bypass to U.S.-81. Work on the bridge was completed in summer 2017. The Pharaoh Award is presented each year for the highest quality bridge project in the state and is named for the Pharaoh family of Henryetta, who were pioneers and are actively involved in Oklahoma's construction industry.

Receiving commission approval was a contract for a more than $5 million project in downtown Oklahoma City with a statewide impact. This project will modify portions of the I-35/I-235/I-40 junction, commonly known as the Dallas Junction, to add an extra north and southbound I-35 lane between M.L. King Avenue/Eastern Avenue and S.E. 15th Street. Currently, all I-35 traffic must move into a single exit lane to navigate through the junction with I-40, causing considerable traffic safety and congestion issues. The project is expected to begin in spring 2018 and take about five months to complete.

Commissioners also approved a nearly $8 million contract for reconstruction and widening of more than three miles of U.S.-270 near Seiling in Dewey County, continuing the expansion of the Northwest Passage. They also awarded an $8.5 million contract to reconstruct two miles of U.S.-54 near Tyrone in Texas County. Both routes are major commercial trucking corridors in northwestern Oklahoma.

The eight-member panel, appointed by the governor to oversee the state's transportation development, awards project contracts for road and bridge construction every month. Due to the New Year's Day holiday, the commission's next meeting is scheduled for 11 a.m. Jan. 8, 2018.

Contracts, bid information, the commission's monthly agenda and project details can be viewed at www.odot.org.