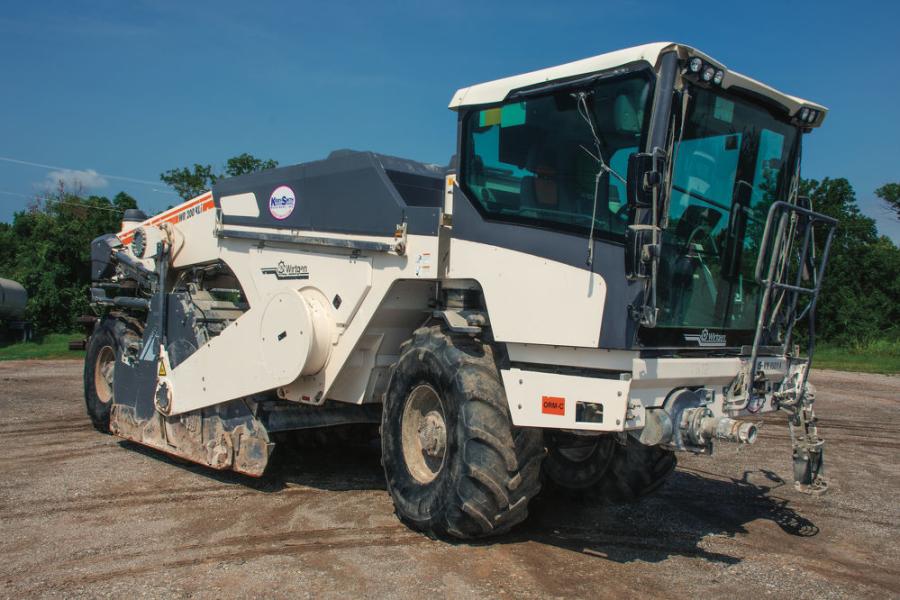 Chambers Excavating & Construction’s specialty is stabilization, and it uses Wirtgen soil stabilizers/cold recyclers to get the job done. “We typically get 40 to 60 feet per minute with the Wirtgen machines,” said Owner/President Cody Hill. “They have increased our production by 30 to 40 percent, with the ability to run anything through them — fly ash, lime, cement or slurry — and achieve a quality finished product.”

Carrying on an organization's legacy offers a challenge for any subsequent owner, especially when the company has a solid reputation for delivering projects on time and on budget. Seven years ago, Cody Hill decided to tackle that task when he became part-owner of Chambers Excavating & Construction.

Hill credits a family friend, Silver Star Construction President Steve Shawn, for mentoring him during the early phases of his new venture. Shawn was the one who referred Hill to Chambers Excavating & Construction owner Fred Chambers. Hill worked for the company six months before he and Shawn teamed up to buy the business from Chambers.

"Steve and I saw a great opportunity, and the timing was definitely right," said Hill. "Fred had more than 30 years in business, and he had built one of the most highly respected firms in the area, so that was a big plus. Additionally, I'm a disabled vet and a member of the Chickasaw Nation. There are special considerations for those ownership demographics when it comes to state projects."

"We still perform turnkey earthwork contracts that include everything from demolition and removal of old pavement and mass excavation to finish grading; however, earthwork with stabilization is our specialty," said Hill. "Fred offered more services, including utilities and paving, but we dropped them because many of our customers perform those tasks. We want to steer away from competing with them."

The company typically runs five full-time crews. Four focus on all aspects of dirt work and stabilization, while one acts as a backfill and clean-up group. Chambers Excavating & Construction's territory covers the entire state of Oklahoma.

Hill estimates that about 90 percent of the company's time is spent as a subcontractor to developers and general contractors who take the lead on Oklahoma Department of Transportation (ODOT), and more recently, wind-farm projects. Chambers Excavating & Construction continues to team up with many of them on a repeat basis.

"We pride ourselves on quality service. It's really a two-way street — we sub our services to several companies, and on the rare occasions when we do prime contract a job, we, in turn, use those businesses to take care of the aspects we don't handle. That's helped us develop and keep some rock-solid relationships," shared Hill.

Crews completed a similar amount of unclassified excavation and 40,000 sq. yds. of stabilization for the parking area and building pad at the Riverstar Casino in Terral. The same contract saw them move nearly 120,000 yds. of dirt to construct lagoons.

"Our largest pure stabilization job was approximately 400,000 yards for a wind farm," Hill reported. "We also are doing some ODOT work with 200,000 yards, so we get into some fairly sizable projects."

Growing up on a ranch, Hill was familiar with operating equipment before he landed a position at Chambers Excavating & Construction. He and his father still ranch, running about 500 head of heifers and 2,000 to 3,000 yearling calves at a time. The Hills use skid steers, tractors, dozers and excavators to maintain their property.

"The ranch gave me a heavy equipment foundation, but I had little to no construction experience," said Hill. "I gained that working with Fred and Steve. The business came with a Komatsu PC220 excavator that has since rolled over 20,000 hours and continues to deliver each day loading dirt and concrete. It's not the prettiest thing to look at, but it gets the job done." 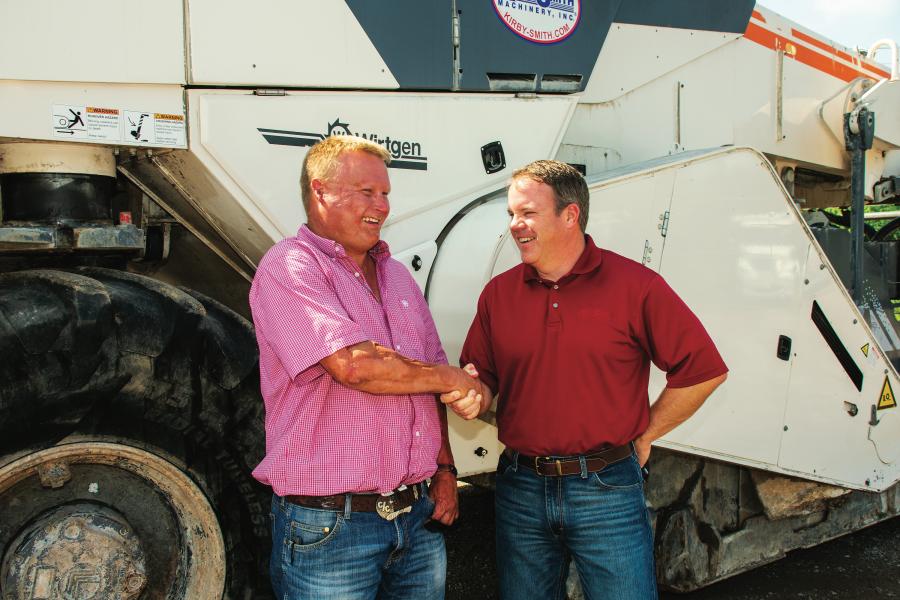 Like Chambers, Hill has developed strong relationships with Kirby-Smith Machinery and Territory Manager Ryan Bebee. His first meeting with Bebee was about putting a thumb on the PC220. Then, two years ago they discussed the advantages of a Wirtgen WR 200i soil stabilizer/cold recycler.

"I needed a bigger stabilizer for a large project, so I rented the WR 200i," Hill recalled. "Right away, we saw the benefits, so we kept it for another job, and we still haven't returned it."

Hill purchased the machine and has since added a larger WR 240i. "We typically get 40 to 60 feet per minute with the Wirtgen machines," Hill shared. "They have increased our production by 30 to 40 percent, with the ability to run anything through them — fly ash, lime, cement or slurry — and achieve a quality finished product. Those can be nasty materials, so having the operator protected in an enclosed, climate-controlled cab is fantastic, too." 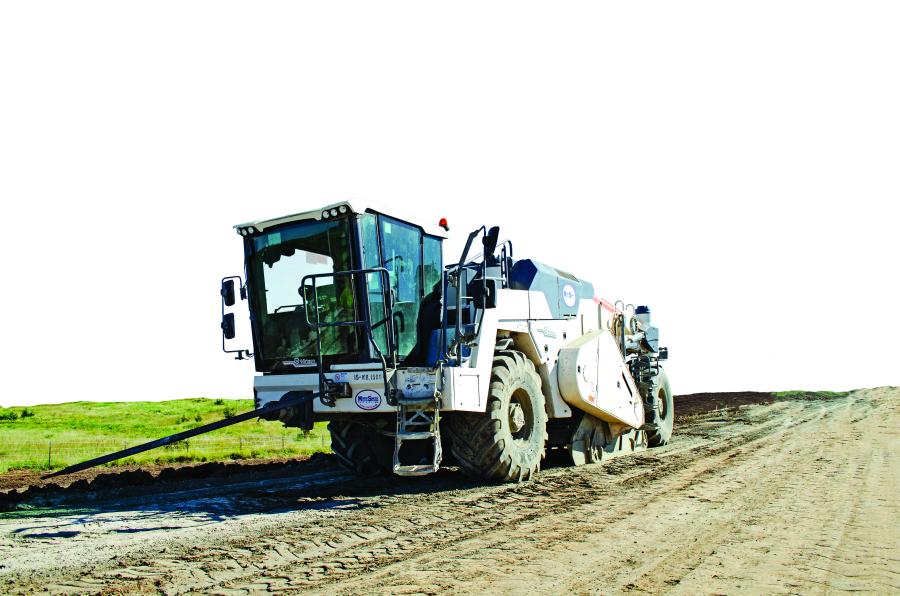 Both Wirtgen machines have a port on the front to attach a water tanker. Operators have the ability to control the intake flow to ensure the proper balance of water and stabilization material.

"That feature provides more consistent moisture content throughout every inch of the stabilized area," Hill noted.

In addition to the stabilizers/cold recyclers, Hill has purchased a Hamm H 11i soil compactor with an enclosed cab and a Trail King trailer with Bebee's assistance. He buys parts and service items from Kirby-Smith's Oklahoma City branch and turns to them for technical support, as needed.

"We rarely have issues with any equipment from Kirby-Smith, and if one does pop up, they are right there to resolve it quickly," said Hill. "[Product Service Manager] Jason Edens deserves a pat on the back for helping in those instances. Ryan, Jason and everyone at Kirby-Smith are great to work with. They understand my business and the needs that go with it, and they ensure they're met."

Hill, a Marine veteran, was seriously injured in 2006 while serving in Iraq when an improvised explosive device hit the Humvee he was riding in. The other three service members in the vehicle died. Now, Hill plans to change the name of Chambers Excavating & Construction to honor his three military brothers killed in action — Jared Shoemaker, Eric Valdepenas and Doc Walsh and — by rebranding to ShoeValDoc Construction.

"It's been in my mind from the start; we were obligated to keep the Chambers name for a certain length of time, and that's been met," said Hill. "While our name will change, the course we are on will stay the same. Our specialty is ODOT, tribal and wind-farm projects. Residential could be in the mix as well. Additionally, I want to pursue crushing because I believe the end product from recycling concrete is ideal for a variety uses. But, at the moment, our dream jobs are those long stretches of roadway or the wide-open fields for wind farms where we can run full steam."

This article originally appeared in the Kirby Smith Connection magazine which is produced by Construction Publications Inc.