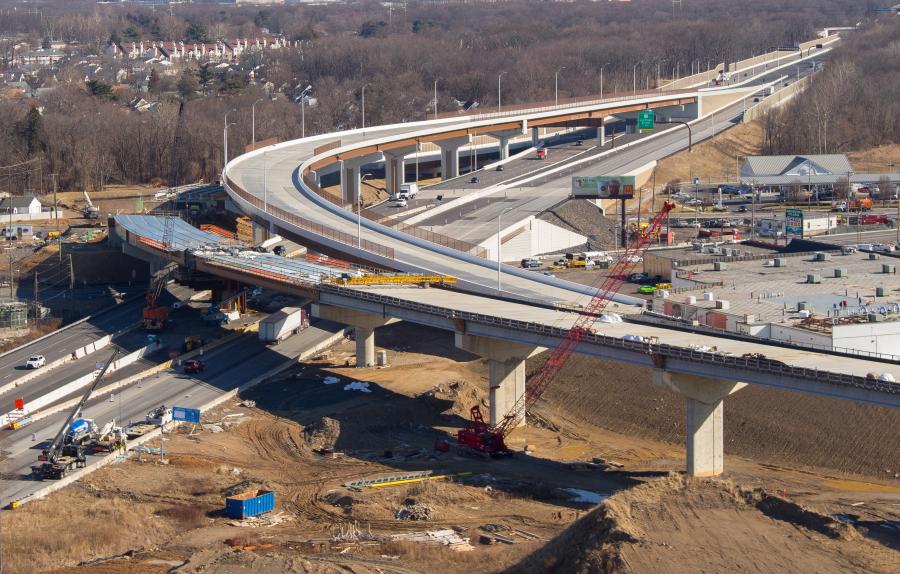 The $425 million Pennsylvania Turnpike/I-95 Interchange is on the cusp of completion. (PA Turnpike photo)

After decades of talk, plans, studies, designs and all the other myriad issues that go with a major highway project, the $425 million Pennsylvania Turnpike/I-95 Interchange is on the cusp of completion. Not only will the project connect the toll road and Interstate, it will earn I-95 a distinction no other interstate can claim.

“One of the things that is significant about this from the bigger picture, is that it is making whole the nation's longest north to south Interstate, said Carl DeFebo, PennDOT spokesman. “I-95 goes from Maine to Florida. We say this will complete the missing link to I-95. People are under the understanding that I-95 is one solid highway, but there is a missing section.”

The roadway is scheduled to open this fall.

The original stretch of the PA Turnpike was completed in 1940.

“That was 16 years before the law creating the interstate was signed,” said Mike Philips, senior engineer project manager for the Turnpike. “When that Interstate act was signed by Pres. Eisenhower, there were only a handful of toll roads that predated the Interstate system.”

The Delaware River extension of the PA Turnpike and the Delaware River Bridge were completed in the 1950s. Ten years later, I-95 was built, but there was no direct connection between the two highways.

“When I-95 was completed, federal laws prohibited the connection, the use of federal funds, to connect to the tolled PA Turnpike,” DeFebo said. “The two highways crossed, but did not interchange. In the mid 1970s, PennDOT studied a connection between the Turnpike and I-95, but it wasn't an easy to build route.”

Connecting the Turnpike to I-95 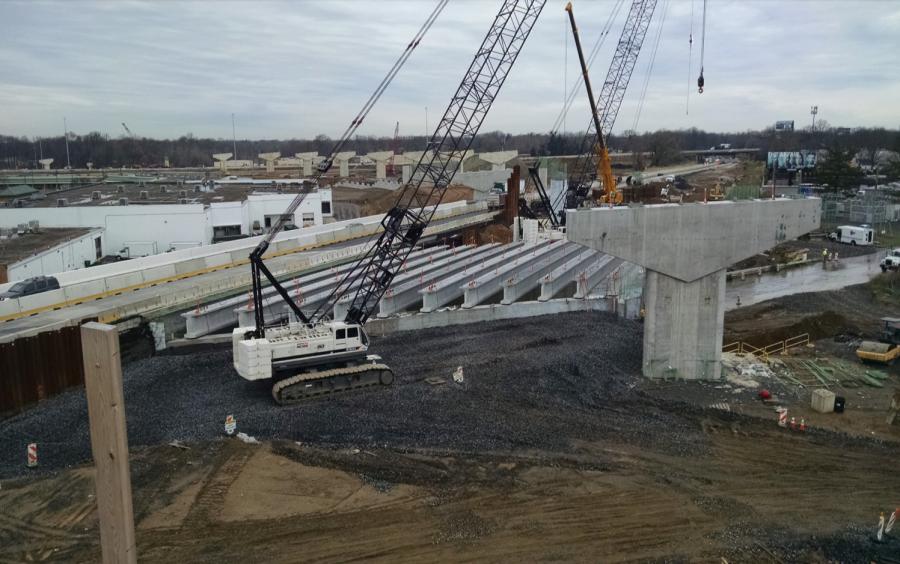 In 1982, the Federal Surface Transportation Assistance Act specified that I-95 should be completed through a PA Turnpike/I-95 Interchange that would connect the NJ Turnpike using the Delaware River Bridge. Three years later, PA Act 61 authorized the PA Turnpike Commission to construct projects throughout the state including the interchange between the Turnpike and I-95 in lower Bucks County and Turnpike widening from Valley Forge to the Delaware River.

After the legislation, work began on a decade-long Environment Impact Statement, along with a look at project alternatives and impacts. It had originally been a two-stage project, but high costs forced PennDOT and the Turnpike Commission to reconsider.

In 2010, they revamped the project to include three stages.

“Stage one was considered meeting the needs of the FEIS,” said Pat Kelly, project manager of Jacobs Engineering. “It's a stand-alone project. That only entails connection of I-95 to Turnpike in north bound and southbound flyover movements. Flyover connections are full highway design speed and both two lanes in each direction — not a slow speed ramp. We do try to call them flyover connections. Stage two is everything associated with the remaining six movements that aren't included in stage one. The bridge was bumped to stage three. We have started a few early action items of stage two, but the focus is on stage one. Stage two is partially funded. The third stage being a bridge over the river is still in the very early stage of discussion. There is not a full understanding of the total cost to even build it.” 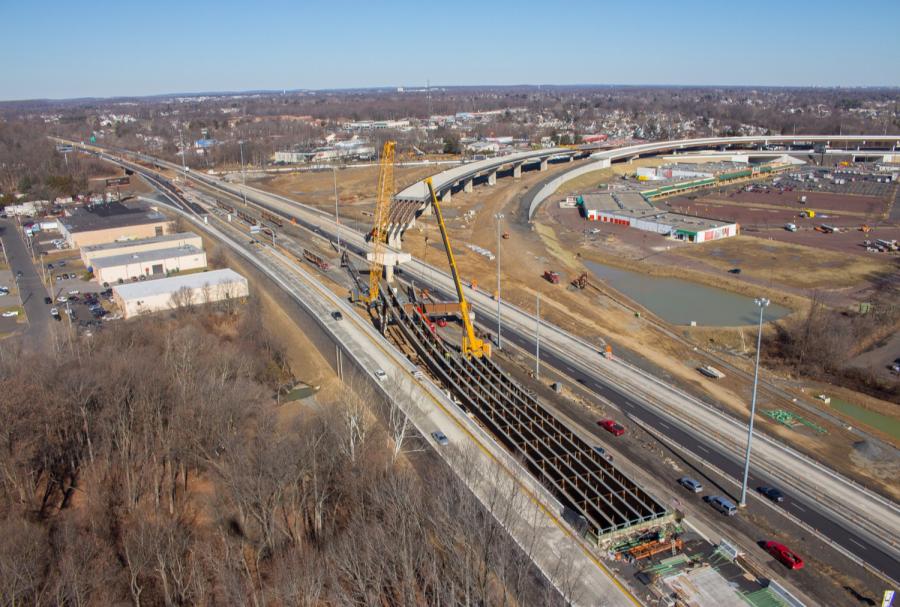 “D10 is tied to work on mainline PA Turnpike and half of the flyover connections,” said Philips. “And D20 is construction of I-95 with the remainder of the connections, meeting in the middle. D10 wrapped ahead of D20. D20 is going through final stages. Together — of the $425 million — D10 and D20 are about $250 million.”

Contractors for the D10 segment are PKF Mark III Inc. and James D. Morrissey Inc. for the D20 segment. Gannett Fleming, Pennoni Associates and Rummel Klepper & Kahl were responsible for the designs on both.

The challenges on the project were numerous, not the least of which was funding.

But funding aside, without contemporary technology, the connection would likely still not be possible.

“From a general, bigger picture standpoint, we had been trying to make good on these connections for some time now,” Philips said. “The technology didn't really exist at the time I-95 was built for electronic tolling. Without electronic tolling we wouldn't be able to build this project. When it comes to the history of this thing, the folks who were building the Interstate system were scratching their heads when they talked about connecting the two.”

Design of the Connector 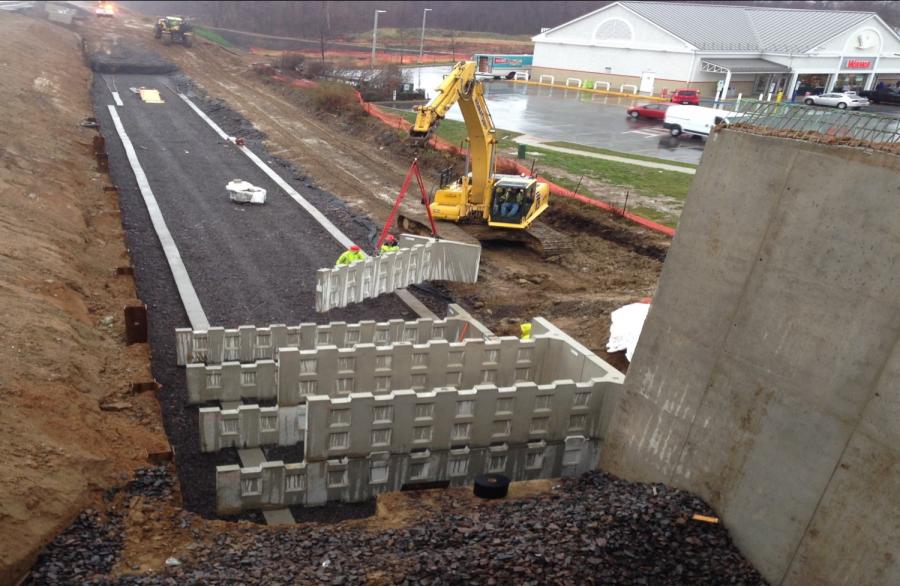 The project includes some unique components, including precast concrete that can be dropped in place quickly.

“This project has a lot of elements of design that you are not going to see too many places, especially on the Turnpike,” said Philips. “Integral abutments — this is a design element that eliminates expansion joints in the bridge structure. And integral pier caps are used to provide the appropriate vertical clearance over the roadway, while keeping the overall bridge height as low as possible.

“The flyover structures themselves are very unique where you have three units of steel. It's not new technology, but not something you see on many other highway projects. Each structure is three steel units. The end units feature curved girders — very large steel girders that are curved. It's a very long span length with fairly significant curvature to them. In the Northbound lanes, it is a 14-span structure and in the Southbound, 15 spans. Another unique part of this project is that we incorporated the use of very large mobile cranes; 650-ton cranes, 300-ton cranes, lattice boom cranes, T-Rex crawler cranes. They were doing single solo picks. It took a lot of coordination and complicated crane staging. Typically, the roadway reconstruction is asphalt so a lot of asphalt paving equipment is utilized.”

For many of the principals involved with the multi-agency project, it rates as one of the biggest, if not the biggest, project of their careers.

“Certainly, for me, it's one of the largest single construction efforts on the Turnpike. It is significant,” said Philips. “This project, for the last two to three years comprised 25 percent of the Turnpikes capital plan in terms of cost.”

Several people have spent their entire careers on the project, DeFebo noted.

“I've been involved in some of the larger projects, from expansion jobs to bridges,” said Mark Raup, senior engineer project manager for the Turnpike, “This, by far, is the most complicated as far as the agencies involved. This one has another whole level of agency involvement.”