The company, which was founded more than 40 years ago, has a lot of experience with this type of work. 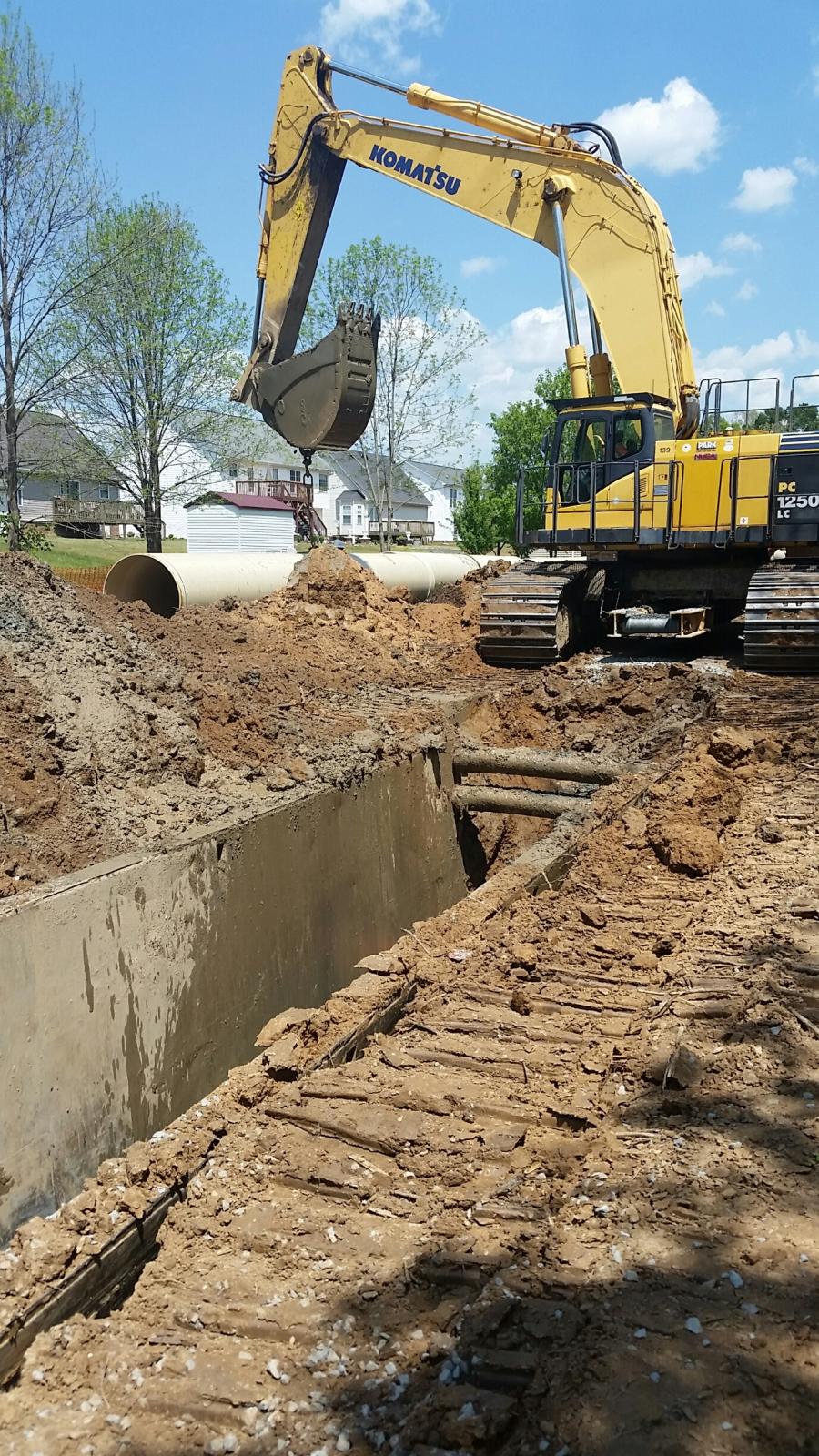 Park Construction of North Carolina Inc. is in the process of laying 23,000 ft. of 54-in. fiberglass pipe in Winston-Salem, N.C.

Park Construction of North Carolina Inc. is in the process of laying 23,000 ft. of 54-in. fiberglass pipe in Winston-Salem, N.C. The project is taking place on an outfall line that runs parallel of South Fork Creek. The company, which was founded more than 40 years ago, has a lot of experience with this type of work.

Steve Norby founded Park Construction Corporation in 1974 and the company is based in Fitzwilliam, N.H. In 1995, Park Construction of North Carolina Inc. was established in Morrisville, N.C., and for the past 21 years, has operated independently from its counterpart in New Hampshire.

Park Construction of North Carolina Inc. specializes in water and sewer construction, and 95 percent of the company's projects are performed for municipalities. The company also has a subsidiary — S.K. Sales, which sells conveyor bedding machines, compaction wheels and other utility construction equipment. The company's experience using these products in the field makes it the perfect fit to advise others during a purchase.

“We brought the bedding conveyors into our fleet years and years ago, to try to get away from stone boxes when we are in tight areas,” said Chris Humbert, vice president of Park Construction of North Carolina Inc. “Because of the swing radius of the excavators, it limited us in certain confined areas, especially when the easements are 20 feet wide, so the cycle times are decreased in the swing of the excavator, so we started looking into how we could resolve the issue.”

Humbert said the company came across the Felco Industries conveyor system, and it performed well, so the company added additional systems to its fleet. The hopper sits on the back of an excavator, and a conveyor belt goes underneath for the full length of the machine and protrudes out of the front of the machine. The company is using a Komatsu PC1250 excavator with its conveyor for its current projects.

“We've had probably a dozen people come look at the conveyor from different states — I'm talking about coming in from Virginia, South Carolina — you name it and they want to see it in action,” said Humbert. “They see that the excavator is concentrating on the trench and never moving other than to drop the soil, and they see the production.

“One of the advantages of the system is that there are less cycle times than for the excavator,” said Humbert. “The operator has full control with the controls right in the cab with the foot pedals. All he has to do is drop his bucket, load it with stone and then pitch it into the trench.”

The efficiency of this system is helping crews complete the project in Winston-Salem, N.C., and two additional projects for the city of Raleigh.

“The line is running sometimes parallel with an existing 36-in sanitary sewer line, sometimes it is running line for line replacing a 36-in pipe, so it's pretty much replacement for an existing system that is going to a waste water treatment plant.”

Humbert said the Komatsu PC1250 on the project is probably one of the biggest machines in the state of North Carolina that is not in a quarry.

“It typically takes about six trucks to bring it in, between the housing, the stick and bucket, the counterweight, and then you have to carry the tracks individually on Lowboys, so I have not seen many, I've been to a lot of utility projects, but I have never seen a 1250 size machine.”

The dimension of the pipe and the depth needed to install it, coupled with the project's proximity to the creek, has proved challenging for the company. Fortunately, the Komatsu PC1250 is ideal for dealing with large structures, and has proved to be the perfect fit.

“The cycle time — how much soil can we remove in one cycle? The 1250 worked nicely on that,” said Humbert. “Previously we had a [Komatsu] PC1000 and that was just a workhorse. It fit nicely when we were setting diversion structures — 12-ft. diameter manholes. When you start talking about a structure that weighs 60,000 lbs. you've got to have a unit like a 1250 to set it especially when it's 30 ft. deep.”

“It is more of a partnership between our vendors, and we are pretty loyal to certain vendors. If it is an advantage to have them on board with us, we will work with them in any capacity we can. When I call our salesman David Lee of Linder Industrial Machinery the turnaround time is within our scope of work.”

Park Construction of North Carolina Inc. is an active member in its community and is a member of NCUCA, NUCA of the Carolinas and the Carolinas AGC.