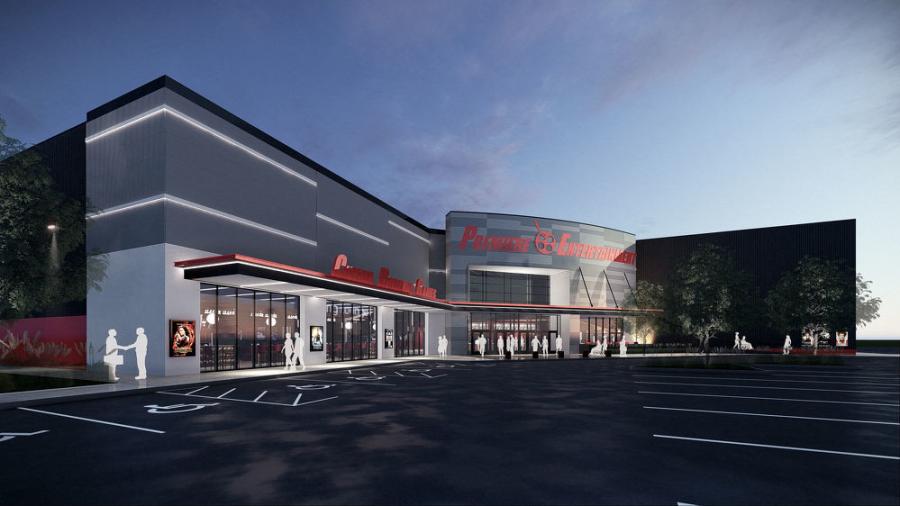 A rendering of the completed entertainment complex (5G Studio rendering)

In Pell City, Ala., construction crews are working on a highly anticipated project that will give residents a place to spend leisure time with family and friends. The more than $9 million entertainment complex will include a movie theater, bowling alley and pizza kitchen.

"This complex will be unlike anything else offered in our county and beyond," said Brian Muenger, city manager. "We anticipate significant traffic from our surrounding counties to enjoy the new facility. Providing quality options for our residents will help more of our citizens stay within the city for entertainment, and keep their tax dollars within the community."

Officials have been trying to secure a theater for the past decade. Watching construction finally getting under way is extremely satisfying.

"The site is located in proximity to many of our major retail outlets, so many of our citizens and visitors have the chance to see the work regularly as it progresses," said Muenger. "There's incredible excitement, more than any other retail or industrial project I have seen. I get emails and calls from citizens inquiring about the status of the project, which is something you don't see regularly.

"I think the synergy between the two primary features — bowling and movies — will be a huge plus for group events. Having multiple options under one roof is something that will make this project stand apart from other theaters within our general area."

Situated on the east side of the Birmingham metro area, Pell City has experienced significant growth during the past 15 years. According to Don Smith, executive director of the St. Clair County Economic Development Corporation, "The elected officials in Pell City have made investing in their city's future a top priority. Because of this, their community has become a regional hub for health care, recreation, retail and manufacturing activity. The new entertainment complex will be another regional draw to pull consumers from within the city and from afar into their largest retail center. The highly visible location and close proximity to the interstate interchange will increase the entertainment center's impact.

"As with many of the best economic development projects, this entertainment project has spanned multiple mayors and city council members. Initially, Mayor Adam Stocks championed the idea in 2007, but the recession of 2009 made the project unfeasible. In 2012, Mayor Joe Funderburg made it a top priority of his administration. We discussed the development with a number of the top theater operators in the country. The project was agreed upon and approved by Mayor Bill Pruitt and the incoming city council.

"Pell City has some of the best commercial developers in the region. This new complex will increase economic activity in that area, and expand the community's trade market. All of this makes for a perfect environment for new retailers to invest and flourish. Their presence will add to the community's economic engine, and help draw more consumers and visitors to Pell City."

Gary Moore, owner of Big Spring, Texas-based Premiere Cinemas, said projects designed to bring people together for entertainment and recreation are vital for enhancing the community lifestyle and boosting the local economy.

"Jobs are created, and these facilities serve as catalysts, attracting other businesses into an area which spurs even more economic development."

At 46,000 sq. ft., the complex will feature seven luxury recliner-style theatre auditoriums. Each seat is an electric reclining chair with its own private USB port and swivel table for dining. The lobby will feature automatic ticketing kiosks and self-serve popcorn stations and touch-screen soda fountains. The space also will include an ice cream station, coffee bar, café and a full bar.

In addition to watching films, patrons can take part in traditional and night-glow bowling. Plans also call for a large-scale redemption arcade with 50 attractions, party rooms and an overhead ropes course with zip ride and plank walk.

"Going to the movies remains America's most popular and affordable form of entertainment outside the home," said Moore. "Bowling has made a major resurgence in popularity, and brings a complementary family experience, while promoting fun and physical fitness. Merging these popular attractions into a single facility creates a destination that draws from miles around, and turns what would otherwise be a two-hour outing into a four-hour stay-and-play day in Pell City.

"Pell City, located on I-20, provides excellent visibility and access to the new entertainment facility, which will serve as a draw and a destination attraction from miles around," said Moore, who noted that residents have had to make long drives to other cities to enjoy a film or a day at the lanes. "St. Clair County has some 87,000 residents, but no movie theatre or bowling alley to call its own. "

Years in the making, the construction effort had the backing of community leaders early on.

"Both Pell City and St. Clair County officials and residents got behind this project from the beginning," said Moore. "Without the support of the local constituency working diligently to make this project a reality, it couldn't have happened."

"The biggest challenge of the project was waiting for the rerouting of the existing power lines, because two of the dirt mounds the poles were on were in the building pad area."

Walker said the job site was basically cleared, other than a few small pine trees and grass. Weather proved to be an issue, but was not a major factor.

"We had over two weeks of rain outs during the project, but other than not being able to work, and dealing with the mud, it didn't affect our schedule."

As part of their assignment, crews installed approximately 1,900 linear ft. of storm sewer and 15 curb and grate inlets. The sanitary sewer required 620 linear ft. of 6-in. pipe, while the fire and domestic water consisted of 780 linear ft. of 2-ft. and 6-ft. pipe.

After fine grading the stone, the asphalt took about three days to complete. An estimated 16,000 cu. yds. of material was moved.

"We used one large excavator and articulated dump truck to move the on-site material, one D6R dozer to run the fill and a vibratory pad foot roller for compaction," said Walker. "The entire site was graded and stone spread using a D61PXI GPS dozer."

Main materials required on the job were concrete pipe and approximately 7,500 tons of stone. Fine grading the stone on the site was the most time-consuming task, as crews tried to keep it within a 1/4 in. of sub-grade. Workers will return to the site after all other construction has been completed to put the wear coat on the asphalt.

"It's always a rewarding feeling doing a project of this magnitude in our hometown, and having our company name affiliated with it, " said Walker.

Blalock Building Co. Inc. serves as the project's general contractor, while the firm 5G Studio is responsible for the architecture and interior design. Mike Voegtle, AIA, 5G Studio partner, said the creative team was committed to carrying out Premiere's vision of being a world-class entertainment center, despite price limitations.

"Every project has its challenges, especially with the construction budget," said Voegtle. "This facility was no different. Being that this project was several years in the making, we were always designing to construction costs that inevitably were increasing year to year. This was accomplished by utilizing local resources for materials and construction techniques, while being very cognizant of the floor plan efficiency and building systems. Through strategic and close collaboration with our client, we were able to monitor and manage all costs efficiently, while achieving a landmark design.

"The architectural style is a blend of industrialism and modernism. The industrial nature of a large, open and structurally exposed building lends itself well to the internal functions of the gaming and bowling. This is exemplified by the large structural spans of the pre-engineered structure. Traditional steel framing was utilized at the entry and lobby to allow for larger spans of glass and architectural features, including the entrance canopy."

Being respectful of the environment also was a consideration.

"Although the project goal was not to achieve a certified level of sustainability," said Voegtle. "Our design team works to employ sustainable design practices and specifies sustainable and/or reusable building materials.

"Our hope is that this is a place people enjoy coming to, and take pride in knowing this is their new family entertainment center. The complex will provide wonderful entertainment for everyone, for years to come."