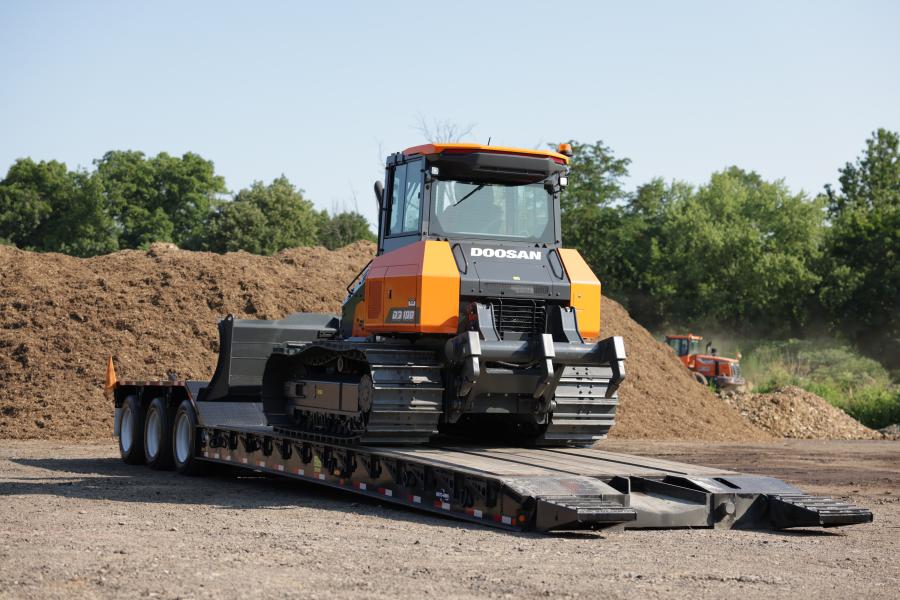 Ratoskey & Trainor Inc. (R&T), a provider of topsoil, mulch and other products and services to commercial and residential customers in Southeastern Pennsylvania, recently staked its claim as the first North American owner of the new Doosan DD100 dozer, the first of Hyundai Doosan Infracore's (HDI) newly created line of dozers.

According to the manufacturer, the new dozer is built specifically for the North American market.

A company in operation for 30 years, Ratoskey & Trainor currently works from its quarry site in Philadelphia's northern suburbs and includes excavation, concrete crushing, recycling and roll-off dumpster pickup among its other services.

The firm's two partners, Rob Ratoskey and Ray Trainor, were thrilled to take possession of the 9.9 ton (9 t) Doosan DD100 during a ceremony at its East Norriton yard on Aug. 4. In doing so, they added to R&T's stable of approximately 25 other machines produced by Doosan, according to Trainor.

"Yeah, it is pretty neat," the veteran contractor replied when asked how it felt to be the first company on the continent to get the Doosan dozer. "I would just like to get on it and operate it without everybody around — get a good eight hours running it under my belt."

Ratoskey & Trainor bought the new Doosan through Best Line Equipment in Allentown, Pa., and with the expertise of Armand Cencetti, the dealership's heavy equipment sales manager.

He said R&T's acquisition of the machine was a lengthy process that began with him bringing a group from Doosan to the contractor's facilities in late 2019 to help answer questions about the new dozer — at that time still in the conceptual phase. 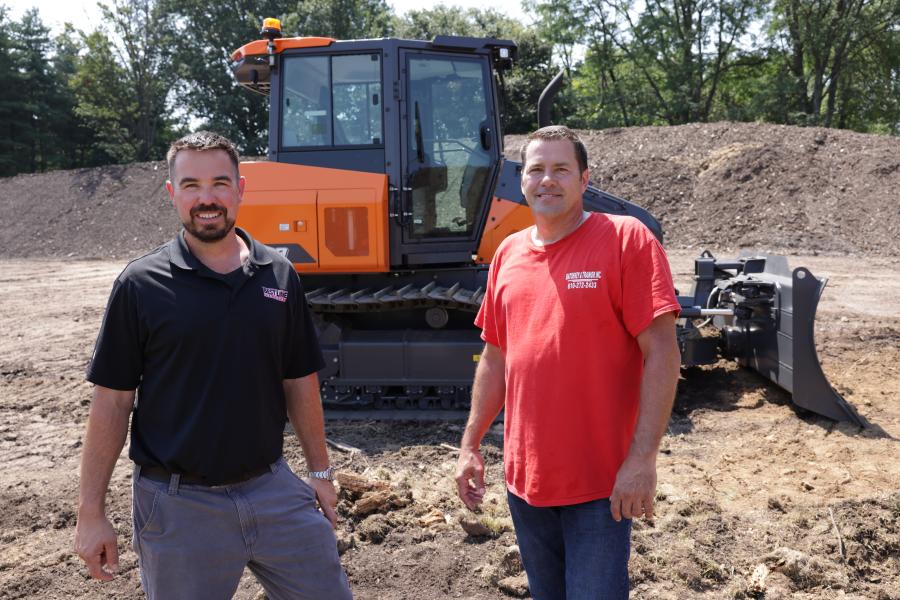 "Ratoskey & Trainor owned a lot of other brands of dozers," Cencetti said. "Doosan officials asked if they would consider a Doosan dozer. At that point, R&T had 15 to 20 Doosan excavators, wheel loaders, haul trucks, etc., so they said, ‘Of course, we would.' Ray and Rob are equipment nuts, and since then they asked me about every month or two, ‘When is the Doosan dozer coming?'"

He added that the equipment maker launched the DD100 prototype in November 2021 at the Doosan dealer meeting, which Cencetti said, "amped up Ray and Rob even more.

"Finally, in the late spring I let them know [the DD100] was coming, that I had an opportunity to sell it. They pretty much took it sight unseen because they trust in both Doosan and Best Line. They also wanted to be the guys with the first of this line of dozers."

The 122-hp DD100 dozer has proven during testing to deliver robust pushing performance, excellent fuel efficiency and all-day operator comfort. It also is built to handle the most demanding conditions and features a dual/single flange-type roller with several track guard options, Doosan noted in a news release in May 2022 to announce the machine's manufacture.

"For Doosan, it is always nice to be the manufacturer of your own powerplant when you are selling a new piece of equipment," he said. "That engine has been in other Doosan equipment that we have been selling to our customer base, so Best Line has a book on it and how it performs. The dozer has Rexroth pumps and a Rexroth drivetrain — a common manufacturer that most people are very comfortable with."

In addition, the Doosan DD100 comes in both a standard track and a low ground-pressure model.

Cencetti also noted that Best Line Equipment, with seven branches in Pennsylvania and one in New Jersey, is a repository of all Doosan parts, filters and other accessories, including those for a DD100 dozer.

Ratoskey & Trainor's operators will find the Doosan dozer easy to run as it offers an 8-in. Smart Touch display, giving them complete control from a convenient touch screen. It also has enhanced visibility with minimized front pillars, maximum glass area, and a standard rearview camera — plus LED lights and front, rear and side wiper blades.

"There are a lot of nice features on the Doosan, including a blade shape feature, speed controls, and a great camera," Cencetti said. "Ray Trainor has run [dozers] for the last 40 years, and he has been very impressed with what he has seen from the DD100."

Trainor, a self-described "old-school guy" has, indeed, been excited with the Doosan; for instance, he likes the buttons on the machine that when pressed shake the dirt off the blade.

"That's just one of the many neat things on it that makes it more operator-friendly," he said. "The angle of the blade used to be controlled by a joystick, but now you just hit a button. There are buttons to lift it, another to drop it, and one to shake it — all great options."

Trainor added, though, that he and Ratoskey were intrigued enough with the new dozer's potential for helping to improving R&T's fuel efficiency and its ability to hold down costs.

"Naturally, fuel is the big question on the minds of all equipment owners, so that will be one of ours as well," he said. "Fuel, speed and serviceability are what we are concerned about in this business. The Doosan DD100 has greater visibility, which is nice, but we hope to see excellent speed and cost per hour from it too."

"We also prefer having the latest technology," Ratoskey added, "plus being able to use different power modes, and be as efficient as possible because we are going to be using this Doosan [machine] on a daily basis. [Ray and I] are excited to see what its actual fuel consumption is, the power of the machine and how well it will work."

As Ratoskey and Trainor integrate the Doosan DD100 within their company's latest service, a topsoil business that it acquired in the last year, the thinking is that the dozer will be the ideal machine for handling dirt and other materials.

"We need to be able to turn the topsoil, and a dozer is required to do so every day," said Ratoskey. "We were looking for the machine that was going to work best for us there, and we feel this is it."

At the company's site in East Norriton, Trainor pointed to a large hill on the property, explaining that it used to be a berm that extended around the entire property. 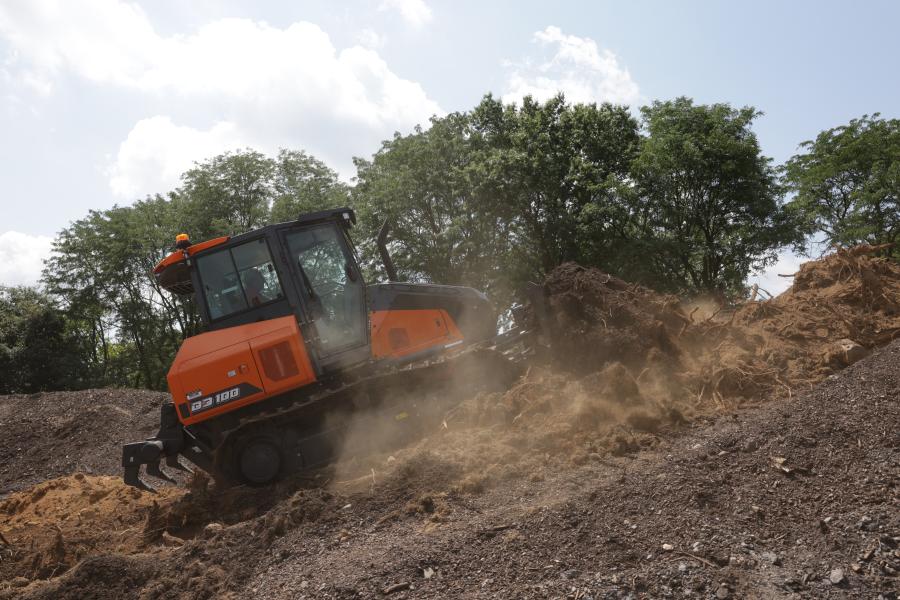 The Doosan DD100, like a soldier, needs to be able to take that hill.

"There is so much big wood in there that the logs just sweat all the time, keeping [the mound] saturated," he said. "Before we screen it, the material needs to be dry, so in the morning I will get up there and push out 800 yards and maybe flip it one more time before we pile it up to dry out. With rocks that have wet topsoil on them, it is hard to remove the dirt, but when the topsoil is dry — naturally — it bangs off. Once it is dry, we use a pair of screens, and our finished product comes out of a trommel."

Likewise, he believes the size of the Doosan DD100 will work well in R&T's grading service, particularly as the company performs a lot of finished grading around houses as well as the occasional parking lot project.

"Mainly, though, that machine is going to roll and dry topsoil, and then, as the trommel goes, you tend to the piles," Trainor said.

For that reason, the two company owners do not consider the Doosan dozer to be a support machine to their operations, but a primary piece of equipment because it will be running eight hours a day just like the screener.

"Depending upon the weather, it will be a five-day-a-week machine," Trainor said. "We have a lot of material to work through."

Now, R&T is open for both homeowners and contractors to buy its topsoil, and so far, business has been booming.

"We just had a builder working on a school over in the Wissahickon [Pa.] area that bought about 150 loads," he said, adding, "Contractors that haul up dirt and dig basements in Philadelphia, build neighborhoods and perform demolition jobs before turning those sites into parks, all need topsoil. Before, we would sell five to 10 loads a week, but now we are selling 75 to 100 loads of topsoil."

Ratoskey said that R&T began in the late 1980s as a demolition and excavation contractor before branching out into triaxle work and using lowboys to move equipment. From there, he and Trainor opened a yard in King of Prussia, Pa., as a site for recycling concrete and grinding wood to make into mulch.

"That grew our company to the point that in 2016 we bought Gill Quarries Inc. and moved our operations here, where we now do mining, crushing, and concrete recycling, along with continuing the grinding and mulching business," Ratoskey said.

The two partners also credit much of their company's success to the relationship it has with Best Line Equipment and the close ties they have with Cencetti, who was one of their first contacts at the dealership.

"Since then, Armand has dropped off each machine we got from Best Line, and I think we have probably bought one of every piece of equipment that Doosan makes," said Ratoskey.

He also has been impressed with Best Line's commitment to service and it being available whenever R&T has needed it.

"They make sure that we do not have much downtime," Ratoskey said. "If there are any critical issues, they find the answers quickly. They have given us loaner machines while they were working on making fixes to our equipment, and their parts availability has been great."

When asked if he saw any risks in buying the first dozer to ever be produced by Doosan, Trainor said he and Ratoskey have felt no unease whatsoever.

"After all the Doosan products we have purchased, and the utmost confidence we have in Best Line and Armand Cencetti, that has never been a concern," he said "Best Line has been good to us, and we have had five years of a good, solid relationship. Why not try the first Doosan DD100 dozer?"

About the Doosan Dozer

This dozer model was the first to be produced through the collaboration of various departments at Hyundai Doosan Infracore (HDI), including development analysis, market research, competitive benchmarking, validation and pilot vehicle assembly. In addition, purchasing and quality teams investigated parts supply while production teams completed the first production dozer model. 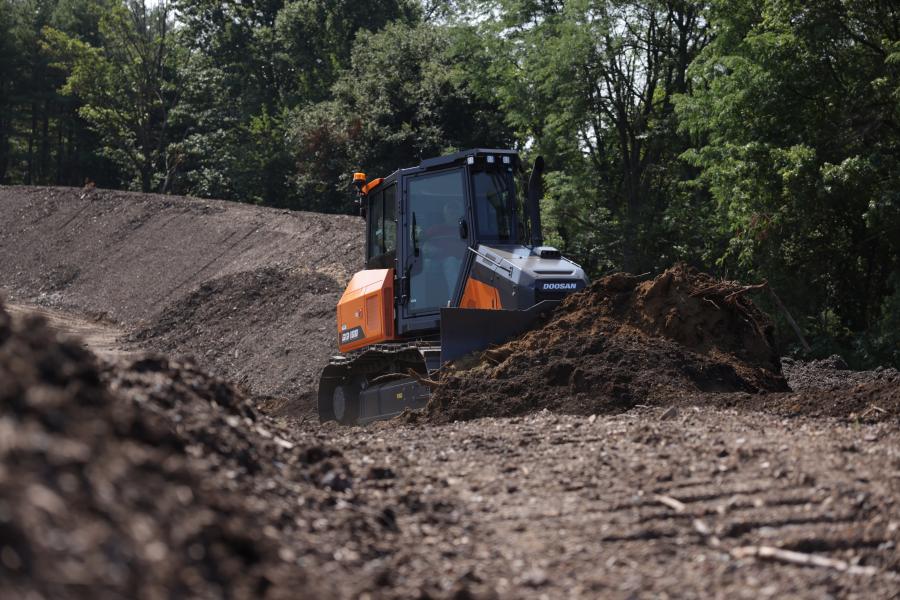 The 122-hp DD100 dozer expands the lineup of durable, rugged Doosan construction equipment and pushes the limits of what a dozer can do. It delivers more pushing power, superior traction, greater visibility, easier operation and advanced technologies to push past the limits of productivity. It's built for the most demanding conditions and features a dual/single flange-type roller with several track guard options. Electrohydraulic controls make the new Doosan DD100 dozer easier to operate, even for inexperienced operators, according to the manufacturer.

Designed with operators in mind, the DD100 features the 8-in. Smart Touch display, giving operators complete control from a convenient, easy-to-read touch screen. It also offers superior visibility with minimized front pillars, maximum glass area and a standard rearview camera — plus LED lights and front, rear and side wiper blades.

HDI also has set plans for its 13-metric-ton dozer — the Doosan DD130 — and will be shipping a pilot machine later this year. The company aims to start production in early 2023.