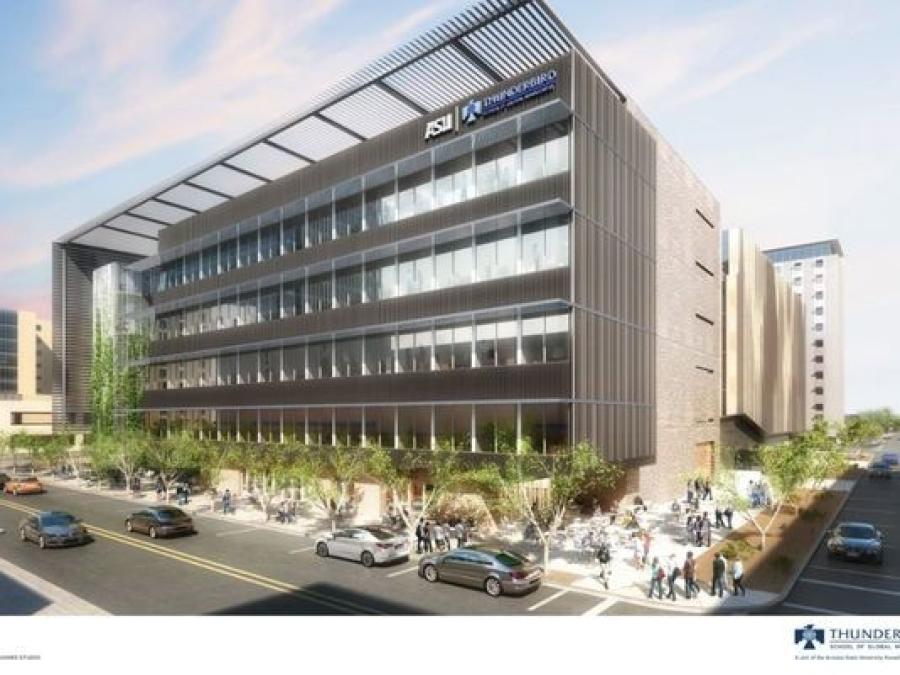 Arizona State University's partnership with the city of Phoenix on its 12,000-student downtown campus was reaffirmed as the Phoenix City Council approved a $13.5 million investment in a new building for Thunderbird School of Global Management, a 72-year-old international business management school that joined the university in 2014.

The move will bring more than 300 graduate students, more than 100 staff and faculty members and hundreds of executive education participants into downtown Phoenix from around the United States and the world. Plans call for construction to begin in 2019 on the new building, on the northwest corner of Polk and Second streets adjacent to the Beus Center for Law and Society. The grand opening is expected to occur by 2021, the school's 75th anniversary.

In the interim, Thunderbird will move to One Arizona Center, as early as this summer for the fall 2018 semester. The Arizona Center is located at 455 N. Third St., adjacent to ASU's downtown campus.

“This is a strategically important move for Thunderbird and the university that we believe will have a very favorable impact on the downtown Phoenix community,” said Michael Crow, ASU president. “We are committed to the downtown campus and to our partnership with the city of Phoenix, so having made this decision, we want to take action as soon as possible.”

Phoenix Mayor Greg Stanton said moving a school focused on international business and management into downtown Phoenix will be an economic development asset to the city of Phoenix in addition to what it does for the ASU campus.

“Downtown Phoenix is a growing hub for higher education and innovation, and Thunderbird's presence offers even more opportunity to attract talent and grow our economy,” Stanton said.

Moving Thunderbird from its iconic air-base location in Glendale, home to the school for more than 70 years, will result in a public planning process with the city of Glendale for redevelopment of the nearly 140 acres that encompass the campus and its surrounding area.

“Moving is always a leap of faith that brings a sense of renewal and spike of energy,” said Allen Morrison, director-general and CEO of Thunderbird. “It is a wonderful opportunity for a renewal of the school, now better integrated with the university. We appreciate the support from the city of Phoenix, and we couldn't be more enthusiastic about forging new relationships and new partnerships with the downtown Phoenix community.”

Thunderbird began as the American School of Foreign Trade in 1946 on an air base that was used to train Allied foreign pilots from more than 30 countries for service in World War II. Phoenix business leaders such as Frank Snell, Walter Bimson, Edward O'Malley and Frank Brophy, as well as many others, were founding board members of the new school.

Today, Thunderbird has more than 44,000 alumni around the world, with active alumni chapters in more than 140 countries. The school offers specialized master's degrees in global management and executive education. The school's bachelor program, which began in 2015 after the merger with ASU, will remain at ASU's West campus.

When complete, Thunderbird's new building will be 85,000 to 95,000 sq. ft. and will sit adjacent to the Beus Center, which houses the Sandra Day O'Connor College of Law as well as several other organizations. Operational funding will come from the university. Construction of the building will be financed through philanthropy, funds from disposition of the existing Thunderbird site, and the city investment. The university has already begun the public procurement process for hiring an architect and general contractor.

“The impact of Arizona State University's downtown campus has been beyond my expectations,” said Michael Nowakowski, Phoenix City Councilman, whose district includes the campus. “Thunderbird students, faculty, staff and curriculum will provide an international component for downtown, adding to both the substance and diversity of our community.”

In addition to the physical move, Thunderbird will be reshaping its graduate school curriculum and its executive education structure to be more responsive to the demands of a rapidly changing global marketplace. Details on the graduate program modifications are still under review. In addition, Thunderbird will launch a new and more robust model of executive education, with stronger administrative and disciplinary linkages to other ASU units, especially with ASU colleges of law, engineering, journalism, design, health solutions, sustainability and public service and community solutions.

“Thunderbird has always been a school based on rigor, excellence and innovation,” said Crow. “With this move, we will be rededicating the school to its core mission to be a force for leadership globally, and we are raising the bar. It is an elite institution. We want students and professional partners whose goal is to stretch, strive and make an impact.”