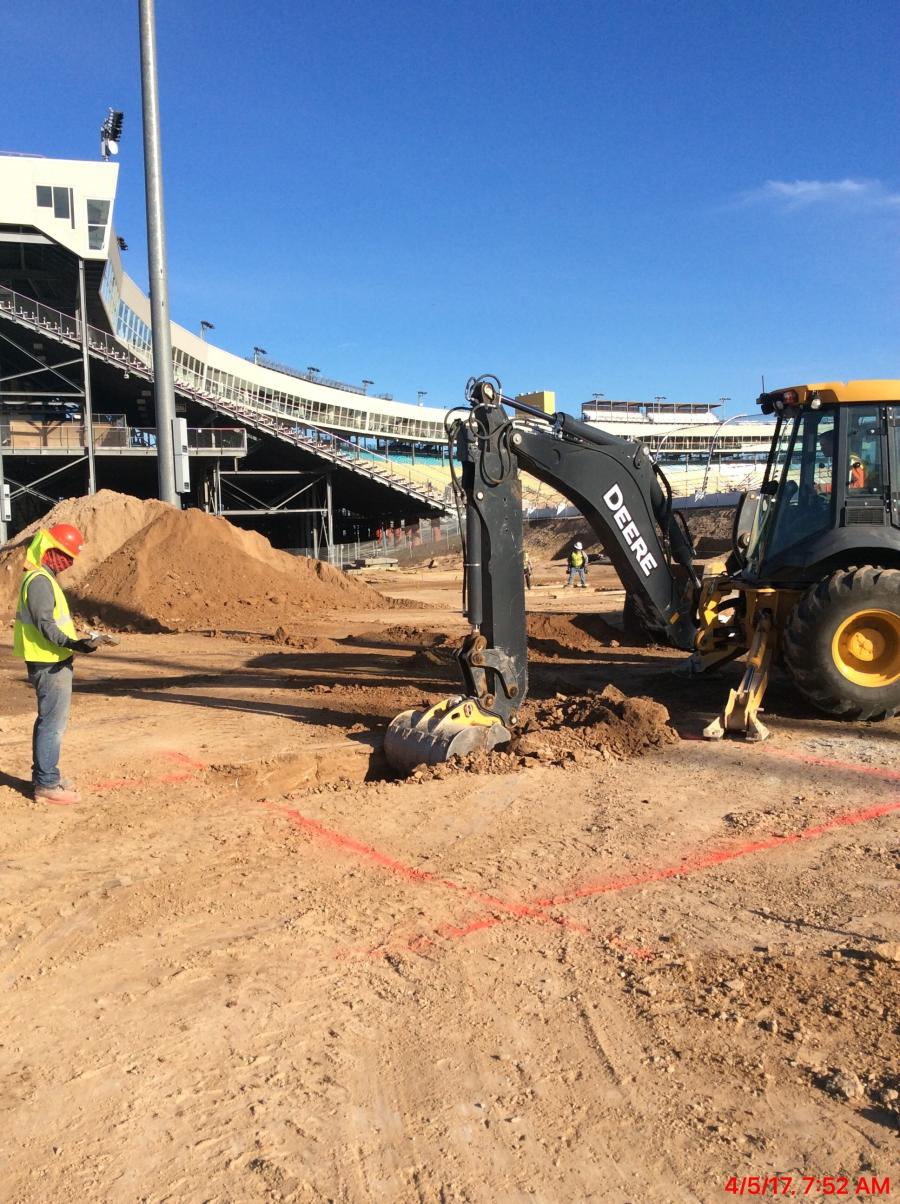 Construction crews in Avondale, Ariz., are shifting into high gear as work continues on a $178 million modernization of Phoenix International Raceway. The much-needed renovation calls for enhanced amenities for fans, teams and sponsors, in a city known for its racing tradition.

"People associated with the sport have always loved coming to Phoenix," said Phoenix Raceway track president Bryan Sperber. "It's because of the community here, the weather, there's a lot to see and do. And the race track itself. It's a quirky design. There's nothing else like it. From a driver's perspective, they really love racing here. But, everybody's had to overlook a lot of the shortcomings of the facility."

Among the highlights of the Phoenix Raceway facelift is a completely redesigned infield featuring a first-of-its-kind garage viewing experience that places fans face-to-face with the superstars of the sport. Phoenix Raceway's start/finish line also will be repositioned in Turn 2 just before the track's dogleg. For Sperber and his colleagues, the construction work is a top priority.

"We think about this project every day. We want to get it right. For the teams, drivers and fans, we really want to do a great job with this project. We're very mindful that we've got a great responsibility to deliver on that, so we're taking it very seriously."

The project includes the installation of new/upgraded seating and hospitality areas near the current Turn 2 location. A new grandstand will be built alongside upgraded seats in the existing Bobby Allison Grandstand, with both featuring individual chair back stadium seats with armrests. New escalators and elevators, additional restrooms and concessions are planned, along with a redesigned Midway located near the seating areas. The renovation also calls for a new pedestrian tunnel connecting the infield to the new seating areas featuring in-seat Wi-Fi connectivity.

"Beginning with Daytona Rising, International Speedway Corporation (ISC) made a clear commitment to reinvest in its properties, delivering the type of race-week experiences fans are looking for," said Sperber. "We're extremely grateful to be the 'second act' in this vision that begins with Lesa France Kennedy. We've taken every aspect of the planning, preparation and building for this project seriously because we know how much this place means to so many people."

A great deal of planning was involved, even before the decision was made to commit the funds to the highly anticipated project.

"For more than five years ahead of it, we had been brainstorming and planning ways to modernize this venue. The finished vision that's being constructed is in large part due to the hard work of so many people.

"Our goal was to make the modernization project at Phoenix Raceway its own, unique entity. Obviously, there are some elements borrowed from what worked at Daytona, but this is a Phoenix-focused project, with a feel that will be unique to us and our market."

"While fans and drivers have continued to come back and enjoy Phoenix Raceway year after year, the fact was that the facility was in need of an upgrade," said Sperber. "It's been around for [more than] 50 years and had not undergone any major renovation in some time. As the expectation for what fans want from a sporting venue continues to evolve, we felt that we needed to meet that criteria at Phoenix Raceway, and through this project, we've done that.

"The reaction from drivers and fans has been overwhelmingly positive. Back at the press conference to announce the project, NASCAR stars Joey Logano, Daniel Suarez, as well as IndyCar driver Alexander Rossi, all expressed excitement for what's to come. Additionally, since erecting the project preview center out on the DC Solar Power Pavilion during race weekends, fans have been able to get a first-hand look at what is coming, allowing them to get a sense for the exciting future."

Sperber added, "It's been great to see construction officially taking place over these last couple of months. We're all very excited to see the finished product in November 2018."

Construction began in early 2017, according to Glenn Kubricky, vice president of operations for contractor Okland Construction.

"The official groundbreaking ceremony was held on Feb. 11, with IndyCar star Helio Castroneves turning the first area of dirt in a Caterpillar excavator. Shortly after, initial clearing work began, primarily in the area where the new grandstand will be constructed. Today, 70 percent of the footings and columns for the new grandstand are in place, along with 50 percent of the work for the elevator shafts. There also is a good chunk of the primary regulatory drainage systems in place."

The first piece of steel will be installed in June, as the new grandstand begins to take shape alongside the existing Allison Grandstand.

Jim Renne, sports principal at the Detroit-based global architectural design and planning firm ROSSETTI, has embraced the project from day one.

"We wanted to create a venue that mirrored what Phoenix Raceway and ISC was looking for, which was modern and sleek, while staying true to what this place has always stood for. We feel that we've met that challenge by blending all of the aspects of the history of Phoenix Raceway, with the futuristic vision needed to pull it all together.

Renne said the redesigned infield is one interesting aspect of the project.

"Being able to build not only a brand new garage area, but one where fans can be able to get up close and personal with their favorite drivers, is a fun task. The biggest challenges are cost management, integrating the existing Bobby Allison Grandstand into a new structure and the speed of design and documentation."

For the first time since the track opened, every seat in the new Allison grandstand will have an unobstructed view. Renne considers the upgrade a very big deal.

"The pit road will be pushed back, so that all the grandstands can see the start/finish line. The grandstands will be renovated so that fan viewing, comfort and experience will be greatly improved. For example, fans will have individual tip-up seats instead of aluminum benches, the entire seating bowl will have access to toilets and concessions at an elevated concourse. In addition, all seats will be moved from old front stretch to allow the balance of fans to sit under suite tower and in the shade. The new canyon entries contain grand staircases, elevators and escalators to improve circulation up to elevated concourse, while giving fans an immersive experience with founding sponsors upon entry."

Renne noted that the scale of NASCAR tracks is significantly larger than most arenas and stadiums.

"The sightlines for racing are impacted by the size, speed of action and many viewpoints. The focal point varies greatly along the length of the grandstands, due to the slope of the track, the distance to the track and the track elevation. This is very different than a traditional stick and ball sport stadium where the view to the field is 100 degrees. With race cars whizzing past the grandstand at an average speeds of 180 mph, the amount of action directly in front of fans is only about one percent of the total action on the track. Therefore, an 18-degree field of view is necessary to see the entire track."

To study these variables, the firm uses a parametric plug-in that allows designers to make decisions in real time to shape the viewing quality of the seating bowl and height of the concourse.

"The average for most sports is six sightline views, while for motorsports it can be up to 30 individual sight line views. Sightline Designer allows designers to set a focal point, typically 20 feet out from the track wall and four feet up from the track, which is assumed to be the roof of a sports car on the track.

"Another special concern is creating an arrival experience for fans. Most motorsports venues were developed with a functional mindset to move fans in and out of the stadium as efficiently as possible. There were many points of entry and no clear wayfinding or special experience at the approach. We've consolidated the entry points into a massive entry that captures fans and creates an exciting approach experience."

Renne said balancing aesthetics and function can be challenging.

"This is the traditional form and function equation that has been a critical foundation of architectural design for decades. Both are essential to any design. We've added another leg to this platform, which is experiential. This is also critical to the success of a project, particularly a sports venue. We collaborate closely with track staff, ISC design and development to make sure our ideation and creative concepts align with their business goals, fan experience goals and corporate partner goals.

"We also get feedback regarding the operations, maintenance and marketing of the facility. Regarding the aesthetics or form, for every design we begin with understanding the context of the building, its history, current use and dreams for the future, and then develop a visual story that is part of the foundation of the design ideas."

Renne said having the start/finish line repositioned in Turn 2 is significant.

"Technically, it is moving to the famous dogleg area, which is a straight portion between old turn 2 and 3. This is one of the most exciting turns in motorsports. All programs from the front stretch, such as race operations, flag stand, lighting and seating, are being relocated to new start/finish line. There will be 23,000 seats built in new construction. We also are revising the midway in front of the grandstand to align with the shift in seating and be closer to overall parking.

While workers have a long way to go before they cross the construction finish line, Kubricky is already envisioning the new track, which will serve countless fans for years to come.

"Phoenix Raceway has been a favorite destination for motorsports fans for more than 50 years. Drivers have loved coming and racing here, fans love making the trip from all over to spend a race weekend here. To be able to upgrade this venue to meet that enthusiasm is a great thrill." CEG