Several landowners — including the Adorers of the Blood of Christ, a Roman Catholic order with land near Columbia — are attempting to halt the project. 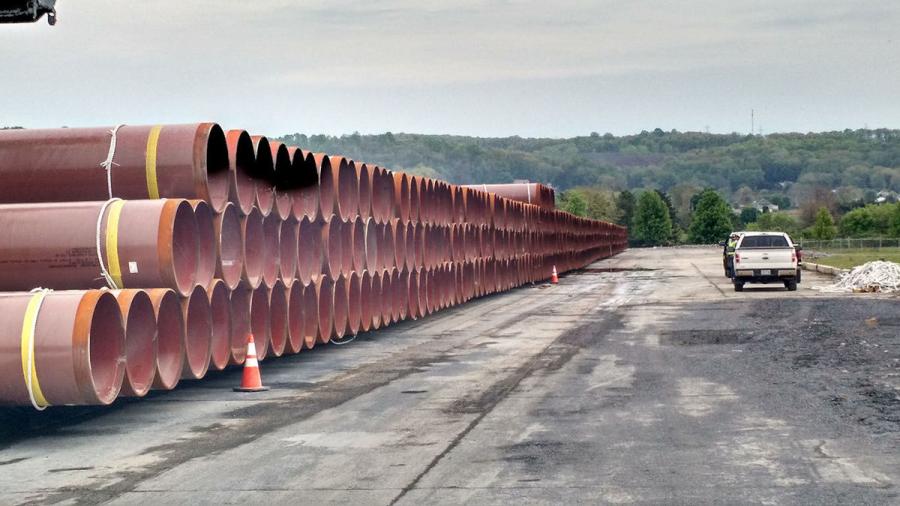 The Atlantic Sunrise pipeline is designed to move natural gas from shale fields in northern Pennsylvania to markets in the south. (Photo Credit: Lancaster Online)

Several nuns from Pennsylvania's West Hempfield Township and other parties opposed to the Atlantic Sunrise pipeline project watched from the gallery in a federal courtroom July 17 as attorneys established the groundwork to seize — or block seizure of — several parcels of land in Lancaster County.

The Transcontinental Gas Pipe Line Co. is seeking an injunction to take the land via eminent domain. Several landowners — including the Adorers of the Blood of Christ, a Roman Catholic order with land near Columbia — are attempting to halt the project.

U.S. District Judge Jeffrey L. Schmehl is hearing the case, which will continue Thursday at 11 a.m. at the federal courthouse on Washington Street, Reading.

Testimony on Monday focused on David Sztroin, project manager for pipeline construction. Elizabeth Witmer, lead counsel for Transco, asked Sztroin to provide painstaking details on the plan to build just over 200 miles of pipeline, most of which lies in Pennsylvania, including 37 miles through western and southern Lancaster County.

The pipeline is designed to move natural gas from shale fields in northern Pennsylvania to markets in the south.

Sztroin also testified on the timeline for choosing the route for the pipeline and the process by which landowners were notified of the plan.

Attorney Michael Onufrak, representing two of the landowners, presented several documents issued by Transco's parent company, Williams, indicating that most of the gas is destined for overseas buyers, not domestic markets.

Sztroin said the Federal Energy Regulatory Commission (FERC) approved the $2.5 billion construction project in February. The order, he said, stipulates the company's right to seize a 50-foot-wide right-of-way through eminent domain for construction, operation and maintenance of the line.

Construction has already begun in several states along the pipeline's route, including portions of Pennsylvania outside Lancaster County. Williams hopes to begin construction locally in mid- to late August, with the pipeline in service by next summer.

“A lot of trees” will be removed from some of the properties affected by the plan, Sztroin said during cross-examination by Onufrak. Although he said Transco will restore topsoil over the finished pipeline and will “promote vegetation,” Sztroin told attorney Carolyn Elefant, representing additional landowners, that they won't plant trees.

In fact, he said, nothing that grows more than five feet tall may be planted over the pipeline.

Any delays to construction could push the completion date back by as much as a year and could cost more than $800,000 for each “move around” along the route, Sztroin added. There also would be a loss of revenue and “damage to the company's reputation,” he said.

Witmer stressed that FERC found the project to be in the public interest. Sztroin said buyers have already reserved the pipeline's entire capacity for natural gas.

During questioning by Onufrak, Sztroin said Transco does not have all of the state permits it needs to begin construction. However, he said, it's unlikely the permits — which deal with erosion control and wetland and waterbody crossings — will be withheld.

Also July 17, Onufrak and Witmer debated the judge's authority to overrule FERC's ruling. Although Schmehl didn't rule on the matter, he allowed Onufrak to continue a line of questioning that Witmer called “a collateral attack on the FERC order.”

Later, Elefant pressed Sztroin — and, at the end of the day, Transco's senior land representative, Aaron Blair — about a clause in the pipeline contract that gives Transco the right to increase the size of the line at a later date. That, Elefant said, violates FERC's order.

Matthew Hennessey, the attorney representing the Adorers, asked Sztroin about potential disruptions to landowners if the pipeline is repaired or replaced in the future.

Blair testified that there are close to 1,100 landowners in Pennsylvania who are affected by the pipeline's construction plan. Most of them, he said, have granted right-of-way access for the project.

Monetary offers to landowners for the easements are “many times” the projected loss of appraised value after construction, Blair said.

Once construction is completed, he said, landowners can use the easement areas for anything that “doesn't put the pipeline in jeopardy or impede access” to the pipeline by Transco workers.

Responding to Elefant, Blair said he wasn't aware that one of the property owners would lose certification as an organic farm because of pipeline construction.